0
Read about pyrethrin, the chemical used to kill no-see-ums. 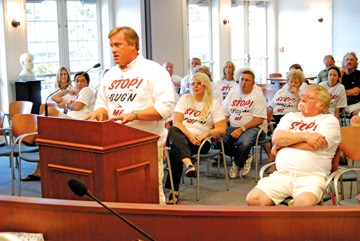 
Ocean Ridge town commissioners were the arbiters of nature last month, ruling down with the no-see-um, and up with the bird (the feathered variety, that is).


In two separate issues at their May meeting, commissioners voted to start a new spraying regimen to battle no-see-ums and moved toward designating the town a
bird sanctuary.


The audience applauded when town commissioners approved a short-term contract to spray for no-see-ums, a coastal issue as reliable as the ebb and flow of the
tides. One resident group showed up wearing their hearts on their sleeves — as
well as the rest of their T-shirts, which were printed with the sentiment “Stop
Bug’n Me.”


“We should do this so the town doesn’t become known as bug town,” said Commissioner Geoffrey Pugh, pointing out that Ocean Ridge loses home sales and value to
no-see-ums.


Doug Wilson of Fleming Pest Management Inc. said the company will spray weekly to combat the tiny insects, whose bite is big enough to drive many Ocean Ridge
inhabitants indoors. Fleming will spray yards adjacent to mangroves via hand
and backpack through the end of the fiscal year for a price of up to $21,000.


If the town deems the results acceptable, it could contract the company for a longer term. The previous pest control company cost about $10,000 more than Fleming, Town Manager Ken Schenck
said.


Terry Brown was the lone dissenter among commissioners, voicing concerns about the environment and about using public funds for what he contends is a private
purpose.


Mayor Ken Kaleel countered, “There’s no question that this benefits the public at large. It does not benefit a private party.” Commissioner Lynn Allison pointed
out that public projects don’t always benefit all residents, noting she hasn’t
benefited from publicly funded drainage work. Nor is she under siege by
no-see-ums. Spectators applauded when Allison said the environment was
certainly a consideration, but that she had to put the residents’ quality of life
first.


Residents who supported spraying maintain that the invisible biting insects make it impossible to enjoy their outdoor spaces. Resident Amy Mostafavi, a surgeon,
also said the insects are a health threat, inviting secondary infection in
patients who scratch itchy or welted skin.


Others, however, didn’t want spraying. Elizabeth Ackerly, who feared the threat to beneficial insects including butterflies and honeybees, said, “If it’s going to
keep no-see-ums dead, it’s going to keep everything dead.”


The town planned to send letters and authorization forms to residents affected by the spraying, which is in the area on the west side of A1A between Inlet Cay Drive and Woolbright Road. Residents
should call Town Hall, 561-732-2635, or Fleming Pest Management, 561-371-5643,
with questions or concerns.


Later in the meeting, commissioners briefly discussed an ordinance tabled at an earlier meeting that would make Ocean Ridge a bird sanctuary, a proposal
championed by resident Jeff Lee. The proposal would protect birds in the area
and possibly provide residents with bird-watching activities, all for little to
no cost, Lee has said.


Commissioners expect to take up the bird sanctuary ordinance on first reading at their June 7 meeting.