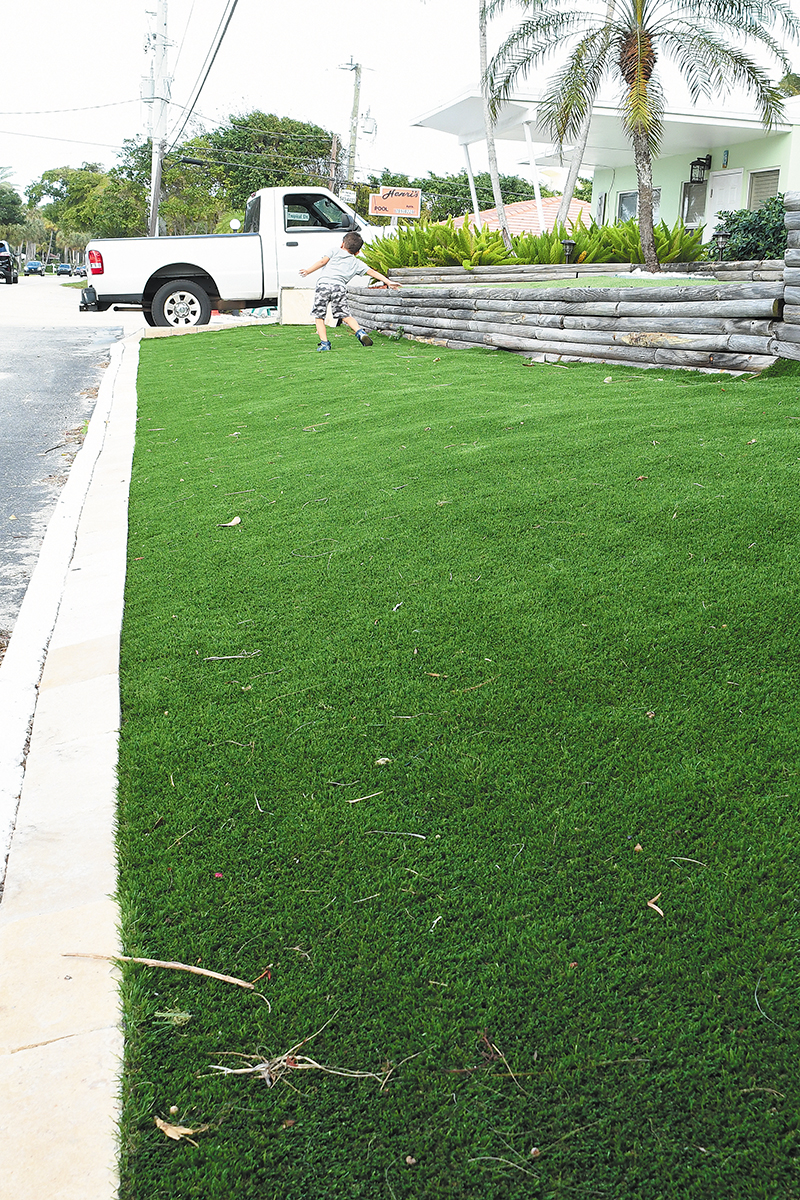 The ordinance, which is up for a final vote Feb. 3, would limit artificial turf to back and side yards and ban it in front yards such as here on A1A. Jerry Lower/The Coastal Star

The long-running sports dispute over whether natural grass or artificial turf is the better surface has spread into Ocean Ridge.
But the town’s debate isn’t about games. It’s about front yards.
While updating Ocean Ridge’s building codes last year, officials decided to restrict the use of plastic grass to ensure aesthetic standards were maintained.
The result was an ordinance that came before the Town Commission for a first reading Jan. 6 that lays down some tough and detailed rules for installing synthetic yard surface.
Specifically, Town Attorney Brian Shutt, who wrote the ordinance with the help of the Planning and Zoning Commission, says the law “provides that synthetic turf would only be allowed in the rear or side yards, not to exceed 25% and not visible from the public right of way. Synthetic turf would be allowed in between brick pavers, not to exceed 4 inches in width, and would not be counted toward the 25% maximum amount.”
Shutt said he also “added language to provide that with existing yards with artificial turf, the turf will be allowed to remain until it is repaired or replaced in an amount that is greater than 50% of the total.”
There is also a sunset clause that requires the homeowner to replace the turf after 10 years. Most artificial surfaces are under warranty for between six and eight years, officials say, so the reasoning is the surface won’t last 10 years anyway.
Commissioners approved the ordinance on a 3-1 vote with Mayor Steve Coz on the losing side and Commissioner Phil Besler absent. The ordinance comes up for final approval on Feb. 3.
Coz argued that the new rules were an intrusion on homeowners’ rights. He said the town should at least allow artificial turf on front yards if it is screened from the street by hedges, walls or landscaping. Coz said the turf would also help the town’s drainage problems by reducing the use of sprinklers.
“I do not agree with this ordinance whatsoever,” the mayor said. “If we pass this, what’s next? I don’t particularly like the look of artificial turf, but it’s a private property issue for me.”
Ric Carey, a planning and zoning commissioner, said the panel worked on the ordinance for months and examined other communities’ laws, some of which were more restrictive.
Carey said the intent was to preserve for Ocean Ridge “the lushness of it, the verdant nature, the sense that it’s a coastal paradise. We didn’t feel artificial turf met that criteria.”
John Zessin just installed synthetic grass at his Old Ocean Boulevard home and it has drawn compliments from neighbors and commissioners. Zessin thinks turf is a good solution for yards close to the ocean where salt and sand make it difficult to grow natural grass.
Moreover, he told commissioners, contrary to perceptions, turf is an environmentally sound solution. After all, it requires no water, pesticides or herbicides, and needs no mowing by machines that pollute the air with exhaust. Also, Zessin said, his lawn is made from recycled plastic.
“At what point does this overreach stop?” he asked, imploring the commission not to inflict invasive rules on homeowners.
Commissioner Kristine de Haseth, in strongly supporting the ordinance, said she would be willing to make it even more restrictive.
“This is a community character issue,” she said.