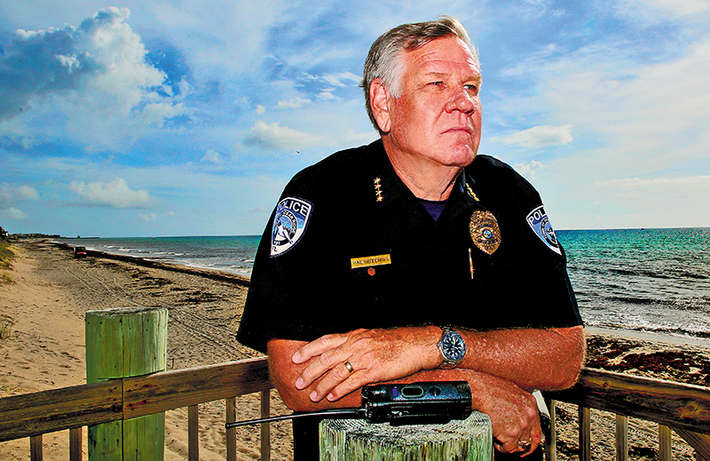 Ocean Ridge Police Chief Hal Hutchins is retiring in August after serving as chief since 2015. Hutchins has spent 39 years in law enforcement, having retired from the Palm Beach Police Department in 2005. Tim Stepien/The Coastal Star

Hal Hutchins was still a sergeant in the town of Palm Beach Police Department when he pulled over the wife of a community leader for speeding.
“Do you know who I am?” she asked.
When Hutchins nodded that he did, she told him that she was running late for her hair appointment.
Hutchins then spent the next 25 minutes explaining why for her own safety she shouldn’t speed and then, rather than write a ticket, offered to call the salon and reschedule her appointment. She declined the offer, but they parted on such good terms that the woman’s husband called Hutchins that night to thank him.
For Hutchins — Ocean Ridge’s police chief, who will retire Aug. 20 after 39 years in law enforcement — that incident illustrated what it’s like to be a police officer in a small coastal community.
“The beauty is you have the time to be actually involved on a personal level,” says Hutchins, 59, whose entire career — except for a few months of driving a doughnut delivery truck — has been as a law enforcement officer dealing with people living in or visiting either Palm Beach or Ocean Ridge. “We have the luxury of being able to be more service-oriented.”
Even so, the image of small-town coastal cops as glorified security guards is a far cry from reality: The jobs require the discipline and training to enforce laws and make arrests. Still, officers in these often-affluent communities have time for getting to know residents, rather than just racing from call to call.
“Law enforcement becomes just part of the job,” Hutchins says. “Once we become only the enforcer, we lose touch with the greatest segment of our community.”
Hutchins believes it’s important for cops to build mutual trust within the community. One way to build that trust, he says, is to talk to people.
“I pride myself in getting to know as many people as possible in every place I’ve worked,” he said. “There is much more value in policing that way, because you can avoid having to write tickets and arrest people.”
Police officers in coastal towns also have the responsibility for ensuring residents’ safety in the event of a hurricane. They are trained to respond to incidents on the beach or in the water. They must sometimes handle dangerous situations.
Hutchins remembers receiving a call one night shortly after he was named Ocean Ridge police chief, telling him a man had barricaded himself inside a home and was threatening to shoot at officers and others.
Hutchins drove to the scene and, with other officers, spoke to the man through a window, calming him down and waiting until the man — who had been drinking — dozed off.
“We were able to resolve the situation without incident,” Hutchins said.
Hutchins acknowledges that small coastal towns are safe for the most part and that makes it possible to do small things for residents — checking on homes when residents are away or driving homebound seniors to the polls on Election Day.
“Customer service is the most important thing I can think of in my whole career,” Hutchins says. “It sets the stage for the expectations of the entire community.”

From high school to law enforcement

That career for Hutchins began in 1981 when he was fresh out of Lake Worth High School and looking for a job. He had offers from the West Palm Beach Fire Department and the Palm Beach Police Department at the same time. The law enforcement job paid $1,000 a year more, so he took it.
“I think I made a great decision as far as my life goes,” he said.
He stayed with Palm Beach, rising to the rank of sergeant, and after retiring in 2005 took a part-time job delivering doughnuts for Krispy Kreme.
But he missed law enforcement. “At 43, retirement wasn’t for me,” he said.
So he started in Ocean Ridge as a volunteer reserve officer. Eventually he was hired by then-Chief Ed Hillary and rose to lieutenant before being named chief in 2015.
At the reins, Hutchins continued putting the focus on customer service, encouraging the staff to “treat everyone special.”
Hutchins also mentored the man who is set to become chief, Richard Jones, a lieutenant who joined the department in 2014. Jones had worked in the Glades County Sheriff’s Office, where he rose to the rank of major.
“Chief Hutchins is leaving this department in a much better position than it has ever been before,” Jones said.
Hutchins also gained the respect of fellow police chiefs and in January was elected president of the Palm Beach Police Chiefs Association.
For his part, Hutchins said he’s leaving his career as a coastal police officer — perhaps until he comes out of retirement once again — with no regrets.
“Everything has led me to something better,” he said. “This town provided me with more than I provided it.”