0
By Steve Plunkett
The prosecutor and defense attorney in onetime Ocean Ridge Vice Mayor Richard Lucibella's felony trial are feuding over what evidence the jury will hear.
Assistant State Attorney Danielle Grundt filed a last-minute motion Aug. 15 to keep Lucibella and his lawyer, Marc Shiner, from, among other things, referring to Lucibella's age and suggesting that the case is politically motivated, either of which Grundt said would "inflame the jury."
Lucibella, who turns 65 on Aug. 29, is charged with battery on a police officer and resisting arrest with violence, both felonies, and a misdemeanor count of firing a weapon in public. He has pleaded not guilty.
Grundt and Shiner gave Circuit Judge Daliah Weiss their arguments for and against the "motion in limine" (or motion at the threshold) 30 minutes before the trial was set to begin Aug. 20, then agreed to negotiate with each other and return Sept. 5 for a status check.
"We'd like to try to resolve the motion in itself instead of wasting days of the court's time," said Shiner, who withdrew Lucibella's demand for a speedy trial.
Grundt also wants to "wholly exclude and/or substantially limit" what Shiner's expert witnesses can say on the stand, including whether Lucibella should have been permitted to go into his home while police were questioning him and whether the officers' actions were excessive based on Lucibella's age.
Lucibella was arrested Oct. 22, 2016, after police went to his oceanfront house to answer neighbors’ reports of hearing gunfire. They confiscated a .40-caliber handgun and found five spent shell casings on the backyard patio.
He and a police supervisor, Lt. Steven Wohlfiel, were both on the patio and “obviously intoxicated,” the officers said. Both men denied firing the gun. Officers later determined the seized gun was Wohlfiel’s.
Lucibella resigned as vice mayor the following December. 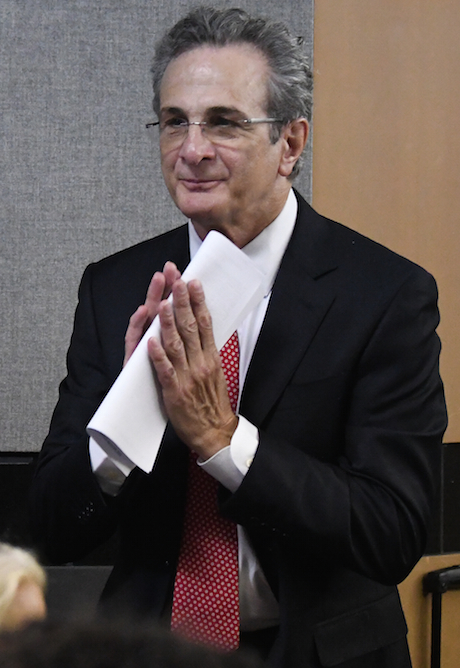 Former Ocean Ridge Vice Mayor, Richard Lucibella turns to thank a group of more than 20 supporters who showed up during a pre-trial hearing Aug. 20. Judge Daliah Weiss asked the prosecution and the defense to negotiate with each other and return Sept. 5 for a status check. Lucibella is charged with battery on a police officer and resisting arrest with violence, both felonies, and a misdemeanor count of firing a weapon in public. He has pleaded not guilty. Jerry Lower/Pool Photo
Tags: evidence, lucibella, postponement, trial
E-mail me when people leave their comments –
Follow