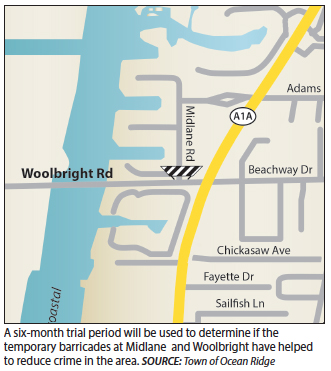 Ocean Ridge commissioners are moving forward with a plan to temporarily close the entrance to Midlane Road at Woolbright Road for six months, in the hope of enhancing crime prevention and safety.
The closing is scheduled to begin on Dec. 2, and Police Chief Hal Hutchins said signs redirecting motorists would go up well before that as part of the town’s outreach to inform residents of the new traffic pattern.
Commissioners unanimously approved spending up to $750 to install plastic barricades at the Midlane entrance. Though the road will be inaccessible at Woolbright, Midlane will remain open throughout the six-month trial period.
Mayor Geoff Pugh said crime statistics compiled by Hutchins and reports from residents suggested that the Midlane neighborhood had a higher rate of burglary attempts than elsewhere in the town. Pugh said it was time for the commission to deal with the problem.
“Not doing anything about Ridge it is what we’ve been doing for the 13 years I’ve been sitting up here (on the commission),” Pugh said. If after six months there’s no improvement, the mayor said, the town will reopen the entrance and take down the signs. He said if residents don’t like the change, the commission is sure to hear about it.
Commissioner Richard Lucibella said the plan is “100 percent reversible” and was worth trying. However, he warned residents they might be sacrificing convenience to improve security.
“Nothing comes for free,” Lucibella said.
Commissioners said they would consider adding speed bumps and traffic calming devices next year, depending on how well the Midlane closing works.

Swaim dispute not over
Developer William Swaim is stirring things up again in the lagoon behind Town Hall.
For the last two years, Swaim has repeatedly petitioned the commission to create an easement around Town Hall to allow him access to lots he owns west of the building. Commissioners have told Swaim he must first get permits from the South Florida Water Management District — which has denied them, saying the land was environmentally sensitive mangrove wetlands. In May, an administrative law judge in Tallahassee sided with the SFWMD and denied Swaim’s appeal.
In October, Swaim’s Waterfront ICW Properties company obtained a warranty deed on property owned by Todd Flato and Diana Fenimore. Swaim maintains the lot stretches into the lagoon underneath the docks at the Wellington Arms Condominiums.
Swaim’s attorney, Alfred LaSorte of West Palm Beach, has accused the condos of trespassing and wants Wellington Arms to take down the docks, or pay the developer $50,000 — and also “retract all objections” to Swaim’s permitting request to SFWMD. The condo group has hired a lawyer and is contesting the matter.
In other business:
• Commissioners welcomed Jamie Titcomb as new town manager at the Nov. 2 meeting, and said so long to Ken Schenck, who completed nine years on the job.
“It was a little different this morning getting up and thinking I didn’t have to go to work,” Schenck told the commission.
Titcomb, 59, worked as town manager of Melbourne Beach since 2014 and is the former executive director of the Palm Beach County League of Cities. He will earn about $105,000.
• The town has scheduled its annual Holiday Celebration from 5:30-7:30 p.m. on Dec. 4. Light snacks and beverages will be served and children can expect a visit from Santa. The celebration is open to all residents. Ú