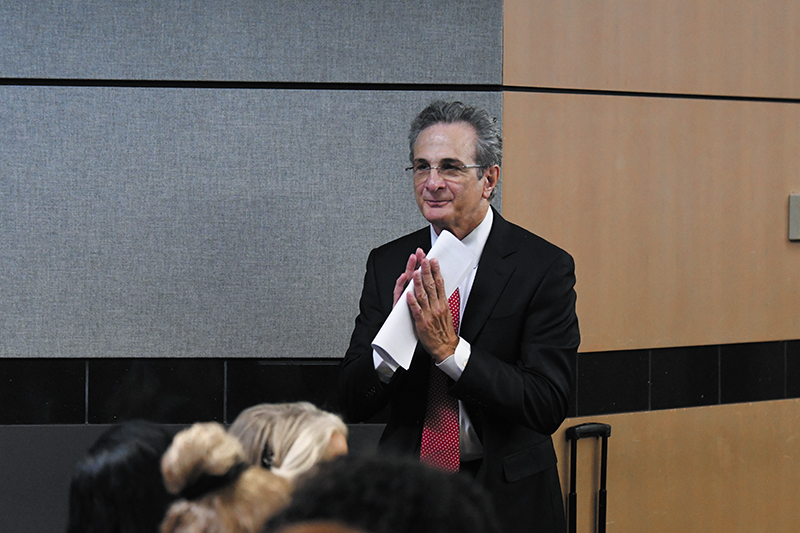 Richard Lucibella gestures to supporters after receiving a postponement in his trial. Jerry Lower/The Coastal Star

Onetime Vice Mayor Richard Lucibella may offer a simple defense to charges he battered an Ocean Ridge police officer and resisted arrest with violence: The officer pushed me first.

A hearing on last-minute motions from prosecutor Danielle Grundt and defense attorney Marc Shiner a half-hour before Lucibella’s trial was set to begin Aug. 20 offered a preview of what jurors may eventually hear.

Shiner said officers Richard Ermeri and Nubia Plesnik and Sgt. William Hallahan had no lawful right to be in Lucibella’s backyard the night of the Oct. 22, 2016, arrest because they were not chasing a suspect or stopping a felony in progress.

The exchange followed a summary Shiner offered of Lucibella’s view of what happened behind his oceanfront house. After police arrived on the patio, Lucibella asked longtime girlfriend Barbara Ceuleers to get him a drink.

“She’s in the doorway with her arm extended with a drink. My client tries to grab it,” Shiner said. “Officer Ermeri, it depends on the witnesses but all the witnesses agree that he pushed him back, everyone but Ermeri agrees to that.

“It’s clear he then pushes him, he even grabs his arm. My client pokes him in the chest and says, ‘Don’t touch me. … You have no legal right to be pushing me or touching me. This is my house. I didn’t do anything wrong.’

“And that’s when the officer takedown is what it’s called, and places him flat on the ground. Hits his head on a side screen, had a couple of cracked ribs. And that’s pretty much the case.”

Shiner also complained that Lucibella was not given a breath test to measure his blood-alcohol level despite repeated requests. Lucibella also faces a misdemeanor charge of using a firearm while intoxicated. He has pleaded not guilty to all charges.

Grundt filed a motion in limine (Latin for at the threshold) Aug. 15 to keep Lucibella and Shiner from, among other things, referring to Lucibella’s age (he was 63 at the time) and suggesting that the case is politically motivated, either of which Grundt said would “inflame the jury.”

She also wants to “wholly exclude and/or substantially limit” what Shiner’s expert witnesses can say on the stand, including whether Lucibella should have been permitted to go into his home while police were questioning him and whether the officers’ actions were excessive based on his age.

On Aug. 16, Shiner filed a motion for a “statement of particulars” from Grundt detailing “when, where and what specific conduct” Lucibella is charged with so he can “properly investigate and prepare a defense.”

The judge scolded him over the maneuver. “Really, the court could take this as the defense not being ready after two demands for speedy trial,” Weiss said.

Shiner withdrew the speedy trial demand and asked that the case be postponed.

“We’d like to try to resolve the motion in itself instead of wasting days of the court’s time,” he said.

Weiss agreed and told Grundt and Shiner to return Sept. 5 for a status check and possible rescheduling of the trial.

After the hearing Lucibella maintained his innocence.

“I will not accept anything less than a complete dismissal of charges. Not yesterday, today or tomorrow,” he said.