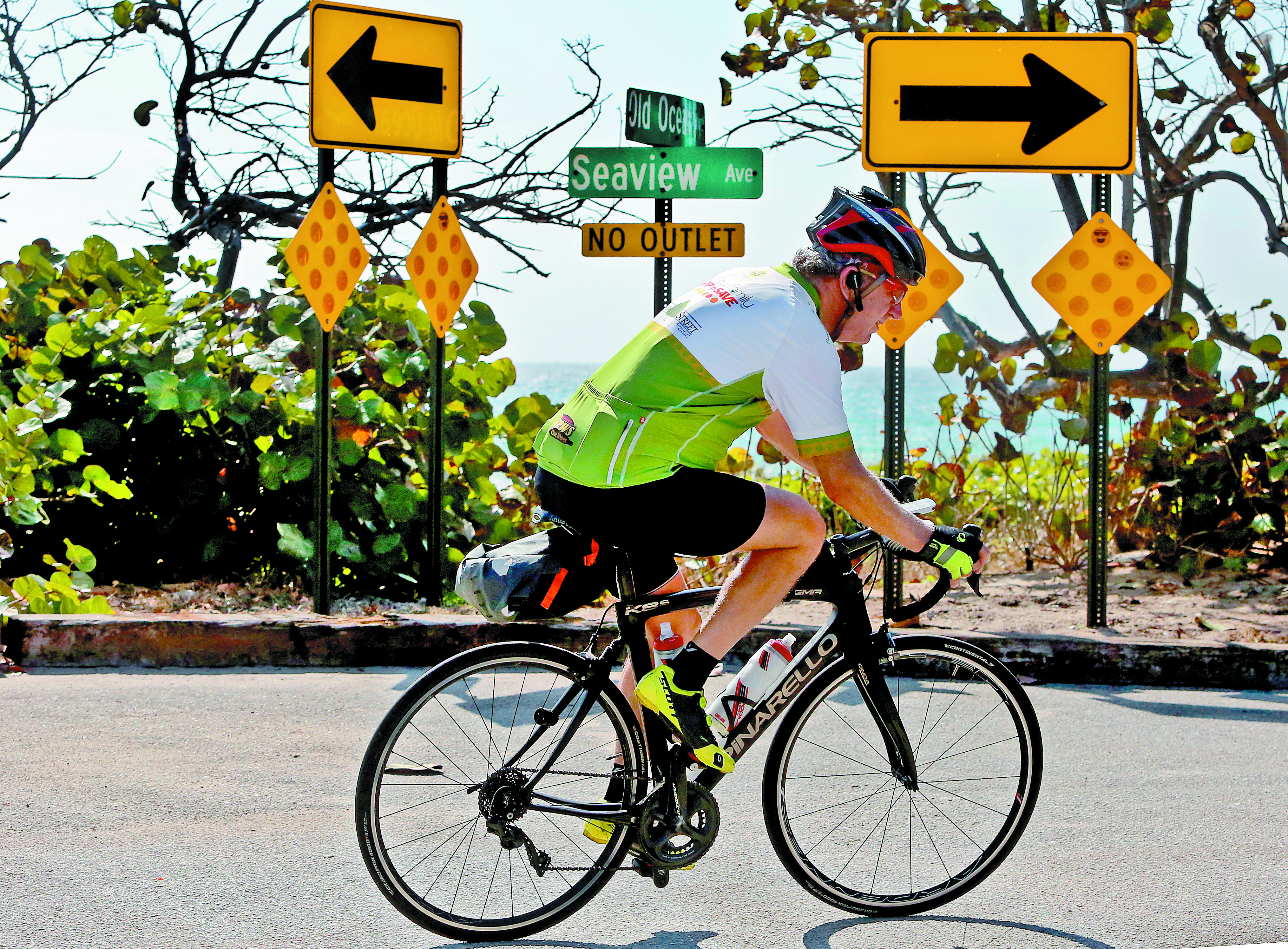 Ray Charley says his wife, Kate, a former triathlete, trained with him and supports him. Photos by Tim Stepien/The Coastal Star 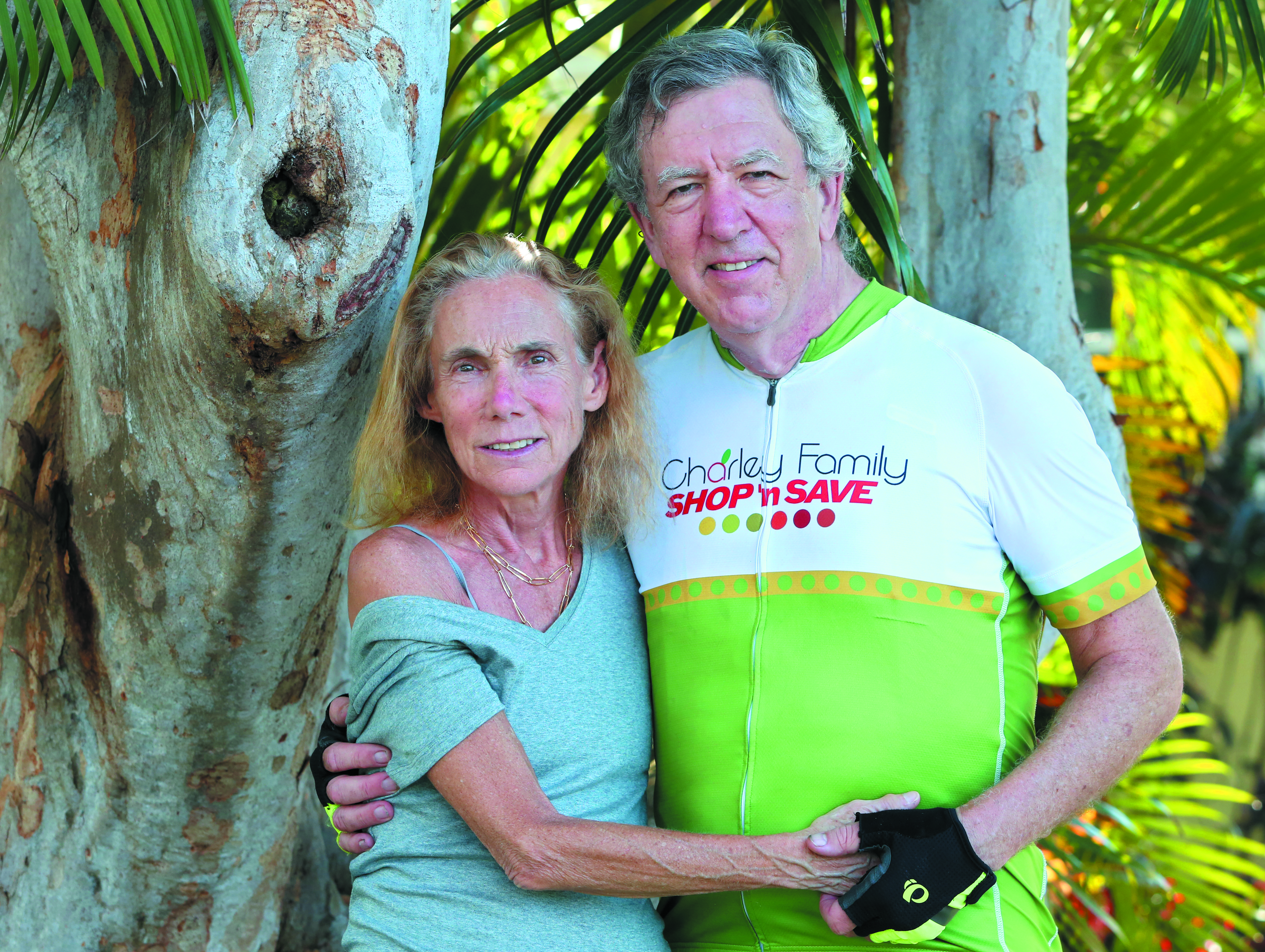 Long-distance cycling is a sport enjoyed by all types of athletes, men and women. Some begin at an early age and continue throughout their lives. Others gradually ease into it in their later years after practicing other athletic endeavors.

But few approach the sport as part-time Ocean Ridge resident Ray Charley did two years ago.

Nothing like diving headfirst into a sport. It was like learning to swim by tackling the English Channel.

But the most amazing aspect of Charley’s baptism into cycling was that it was his first serious attempt at any sport. No organized sports growing up. No JV basketball in high school. No intramurals in college.

“The closest I got to athletics was stocking shelves in a grocery store,” he said. “If the sport required a lot of coordination, it wasn’t for me. I’m really not that athletic. But now I can make the wheels on my bicycle go around.”

On April 1, Charley began Trans-America Cycling’s Ride Across America from San Diego to St. Augustine. He posted on Facebook that he rode his bike through the Pacific Ocean surf to begin the ride. At the end of the day, he posted again, saying, “It was only 33 miles today, but a tough 33 miles with a steep incline. But the sun was shining, it was warm, about 90 degrees.”

Charley was one of 15 riders facing 48 days and 3,050 miles through the hills and deserts of Arizona and Texas and all the small towns along the way.

All the riders are raising money for charities. Charley is riding for professional golf announcer David Feherty’s Troops First Foundation. The foundation helps service men and women who have been injured in Afghanistan and Iraq.

Charley said last month that close to $30,000 was already donated.

Charley’s ties to South Florida date back 40 years when his parents bought a home in Ocean Ridge. When his parents died in 2011, Charley purchased the home.

He owns three Shop ’N Save Supermarket stores in Pennsylvania that his two sons, Mike and Tom, are now running. His daughter, Sarah, is a professor at St. Vincent College in Latrobe, Pa.

So how does a 67-year-old novice train for this king-size challenge?

“My wife,” he said. “She is an athlete and thank God she is here. A few years ago my wife stopped running triathlons and I wanted to tag along with her. I could bike. I can’t really run because I have bad knees.”

Kate Charley, 65, was an accomplished triathlete in races all over the country. In 2016, “she won seven or eight triathlons in her age group,” her husband said. Now she rides with him and trains him.

“I’m more like a training partner,” she said. “We ride together almost every day. He is very strong about this, he can stay on the bike for a long, long time. I think a lot of what he is doing is mental.

“He has a good mindset going in. He is not thinking about a race, he is just going to do his pace. Training like this just takes your life away.”

They started training hard in October. In January, they came to South Florida to get acclimated to the warm weather.

“Well, getting in shape is the most important part of it,” Ray Charley said in mid-March, “and riding and riding and riding. My day consists of getting up and saying what is today going to bring — ride or take a break? Since January, I have been averaging 30-40 miles per day. I have logged 1,912 miles since January.

Ray and Kate are both concerned about the mental and physical struggles this ride holds, but there is one aspect of the training that is almost impossible to address in Florida — hills.

“Training down here he doesn’t get the opportunity to do as many hill climbs,” Kate said. “I suggest that we really do lots of bridge work. If not, it is just going to be a long walk up the hill for him.”

“The hills are still a challenge to be met,” Charley said. “I’m concerned about the hills and climbing the hills. But training on bridges is not comparable to mountains we will encounter.

“There are some gargantuan days coming up. But I’m ready. I know you can’t always have the wind at your back and smooth roads going downhill all the time.”

The Singer Island Bridge provided the best opportunity to hill train, but it is only 65 feet high. In nine of the first 11 days of the ride, the riders’ ascent distance is greater than the descent distance. And in five of those days the discrepancy is more than 1,000 feet. On four riding days, the altitudes will be more than 4,000 feet.

“This ride was of interest because it had a hot shower and a bed every night,” Charley said. “I just don’t see how I could do this with a group that camped. Sounds really cool, but I really wanted to have a shower. Plus, I’m 67. I don’t know how many next times I’ve got left.

The trip schedule calls for 45 days of riding with three rest days. The daily distances range from the shortest of 22 miles on day 5 to be followed by the longest of 96 miles on day 6. The riders will average 67 miles per day.

Trans-America Cycling will have a van and a camper following the riders that will carry luggage, spare bikes, parts, water and snacks.

“Everyone rides at their own pace,” said Larry Love, an executive with Trans-America Cycling, who planned to drive one of the support vehicles. “We have nightly meetings to go over the next day’s ride. We review the map and detail the support stops along the way. We have support stops every 25 miles or so.”

Love said almost all the participants in these events finish the ride. He said the weather is usually the hardest part.

“If it rains, they ride,” Love said. “We have the hotels all reserved and so there is very little room for error. Hardest part of this ride is probably at the beginning. These will be some challenging days with the hills outside San Diego. But the wind is the biggest factor throughout. The wind can make a long, straight road very easy or very difficult depending on which way it blows.”

Another mental aspect Charley will have to overcome is being away from his family for almost two months.

“I’ve never been away from my family, my wife for more than … a meeting somewhere,” he said.

When he gets back he’ll have some family milestones to catch up with.

“Well, I am turning 68 during the ride,” he said. “And my daughter is having a baby during the trip. That was the hardest thing, I really wanted to be there for that.

“I owe a debt of gratitude to my wife for allowing me to do this, my kids for running my business and my daughter for not shooting me because   I’m missing the birth of her child.”

To donate in Ray Charley’s name to the Troops First Foundation, go to

troopsfirstfoundation.org. Click on donate in the top right corner. In the next screen, click on Support Ray’s Ride. The foundation raises money for service men and women who have been injured in Afghanistan and Iraq.