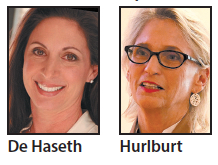 A divided Town Commission appointed Kristine de Haseth to serve a second one-year term as Ocean Ridge’s mayor during a sometimes fractious 31/2-hour meeting on April 5.
The vote was 3-2.
Commissioners Susan Hurlburt and Martin Wiescholek joined de Haseth in endorsing her for the office. Steve Coz and Geoff Pugh both voted for Pugh.
The voting broke down the same way for vice mayor, as the commission chose Hurlburt over Pugh.
The meeting and mayoral appointments affirmed the philosophical differences that shaped the March election. Coz and Pugh have criticized the commission’s direction, saying it passed too many ordinances that burdened individual homeowners and encroached on their property rights.
De Haseth and her two allies have argued that a proactive approach is warranted to manage the robust construction and renovation in the town and preserve its character.
“The town is on a positive track,” de Haseth said. A priority in her second term as mayor, she said, will be advancing the five-year capital improvement plan that includes major upgrades to the town’s stormwater infrastructure.
Pugh, who served as mayor for six years until leaving the commission in 2018, led the four commission candidates in the March 9 election with 440 votes and de Haseth finished second with 364.
Newcomers Carolyn Cassidy had 348 and John Kramer 148.
Wiescholek reminded residents that the election results have no direct bearing on choosing a mayor and often in previous years the candidate with the most votes didn’t get the job.
He appealed for civility and cooperation in the wake of a contentious campaign.
“I was shocked in a town of 2,000 residents to have a political battle going on of that proportion,” Wiescholek said. “What I don’t want to see in our town as a general rule is that we use false or misleading statements to divide and make a political point.”
He said, “We are all neighbors, first and foremost.”
In other business, it’s been two years since commissioners approved a plan for an A1A crosswalk near the Crown Colony Club and Fayette Drive, and three years since homeowners groups started lobbying for action, citing concerns for pedestrian safety.
The project is slowly winding its way through the bureaucracy in Tallahassee, Town Manager Tracey Stevens said. Town staff is addressing Florida Department of Transportation concerns about lighting requirements and removal of trees and hedges from the right of way, Stevens said.
The FDOT rejected the town’s first permit application for the crosswalk, but staff is reapplying and “working to overcome the obstacles,” Stevens said. The town also has reached out to state Rep. Mike Caruso, R-Delray Beach, for assistance. Stevens said she cannot guarantee that the state will approve the plan, but is hopeful the project can move forward.