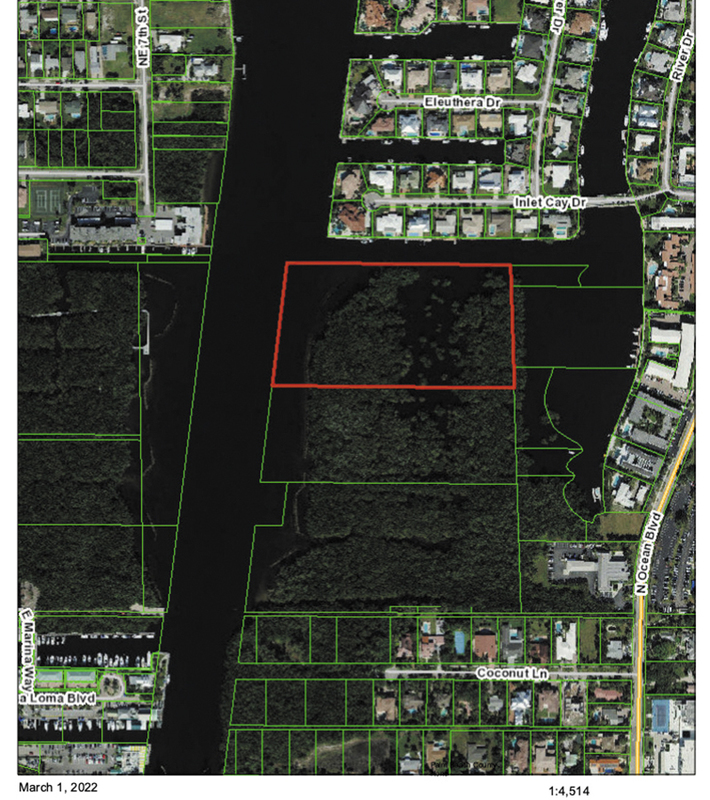 The stand of mangroves (outlined in red) that the town wants to acquire and rezone from residential single-family to preservation/conservation could ensure no residential development would occur in an area that is always flooded. Graphic provided

Ocean Ridge commissioners plan to vote on whether to spend $2 million to acquire roughly 9 acres in a mangrove-filled lagoon north of Town Hall.
If commissioners approve the purchase on April 4, the town plans to rezone the 8.95-acre tract from “residential single-family” to “preservation/conservation’’ as part of a long-term plan to possibly open the area for recreation, Town Manager Tracey Stevens said in a March 7 memo.
Palm Beach County and Spanish Creek LLC have already applied to the town for the same zoning change on land they own immediately south and east of the land the town wants to buy for $1.999 million from the William Priest Family Trust.
Purchasing and rezoning the 8.95 acres would create an expanded area “to preserve the precious mangrove areas and related marine habitats and resources,’’ and offer potential savings to town residents through improved flood ratings, Stevens said.
Her memo doesn’t mention the fact that the acreage borders a 3.3-acre sliver to the east owned by Waterfront ICW Properties, a company that’s been fighting the town and nearby condos in court over its plans to build a road and residential homes in the lagoon.
The town has been under contract with the Priest Family Trust since Feb. 22, with a 60-day due diligence period allowing the town to receive two appraisals, as required by state law.
Stevens said she expected the appraisals to be done before the April 4 Town Commission meeting. If the appraisals come in under the $1.999 million price, the purchase can move forward only with a supermajority vote of the Town Commission. If the appraisals meet or exceed the asking price, a simple majority would be needed to approve the purchase.
Commissioners plan to vote on the purchase April 4 after hearing comments from the public.
“We are delighted to purchase this property and work with the county to make sure the area is completely rezoned for conservation,’’ Mayor Kristine de Haseth said of the potential opportunity. “We would hope that one day in the future that residents might have the ability to access the property for recreation.’’
If the land buy is approved, the commission will need to do a budget amendment April 4 to take the money out of the reserve fund.
According to realtor.com, the same land was relisted for $1,595,000 on July 22, 2021, a month after it had been listed for $1,999,000. The owner raised the asking price to $1,999,000 in a new listing Feb. 4, 2022.
On Feb. 10, the town submitted an offer that met the asking price, but that was rejected because the seller had accepted another offer, which was later withdrawn during the due diligence period, paving the way for the town to submit its offer again, Stevens said.
Although the seller had other “competing offers on the table,’’ the town’s offer was accepted Feb. 22, Stevens said.
Though the 8.95 acres is in a lagoon off the Intracoastal Waterway, research by town staff shows the land has been zoned for residential use since at least 1975, Stevens said.
In other town business:
• The salary ranges for Ocean Ridge police officers and sergeants will rise under a new three-year police union contract approved by the Town Commission on March 7.
The range from officers will change to $54,500 to $94,000 from the previous $54,500 to $86,500. For sergeants, the new range is $72,000 to $104,000, from the previous $67,500 to $97,500.
The new contract goes from Oct. 1, 2021, to Sept. 30, 2024.
• The commission approved $115,000 in improvements at Town Hall: $70,000 to replace the audiovisual system in the commission chambers and $45,000 to paint Town Hall.
• A “Save the Seas” event hosted by the Ocean Ridge Garden Club is scheduled from 8:30 a.m. to 3 p.m. on April 2 at Town Hall and will include a beach cleanup.