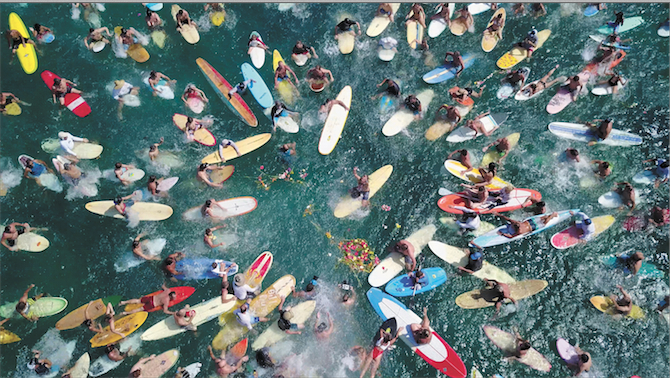 Ryan Heavyside (center) raises his hands amid hundred of surfers who joined together in a paddle-out April 29 to celebrate the life of Ron Heavyside, his father. Mr. Heavyside died April 14 in the 50th anniversary year of his Nomad Surf Shop. Photo provided by James Arena

COUNTY POCKET — When Ron Heavyside opened his store in 1968, he named it the Nomad Surf Shop in a nod to all those wandering riders who travel the oceans in search of a perfect wave.

But for the next 50 years, as the Nomad grew from a modest corner in his father’s TV repair shop to an 8,000-square-foot landmark known throughout much of the surfing world, Mr. Heavyside never ventured far from the County Pocket.
On Sunday afternoon, April 29, several hundred friends and area surfers joined his family on the beach behind the Nomad to give his ashes to the waves on which he rode and made his living.
Mr. Heavyside died at Bethesda Memorial Hospital on April 14 after suffering stomach pains. He was 69.
As loudspeakers filled the beach with the music of Chuck Berry, Jerry Lee Lewis and The Four Tops, friends and surfers young and old, black and white, sipped beer and rum, sharing memories of the man some knew as a friend from their teenage years in the 1960s and others a father figure they had met only recently.
Wrapped in a Nomad T-shirt, the urn containing his ashes waited on the sand before a surfboard adorned with a painting of Mr. Heavyside at work, shaping a board.
Ronald Richard Heavyside was born in Montreal on October 14, 1948. The family moved to Ocean Ridge in 1962, when he was 14, and before long the teenager had discovered surfing.
Tom Warnke, a lifelong friend and fellow surfer, met Mr. Heavyside at Seacrest High School in 1964.
“He was one of the first two students who shocked everyone by wearing their hair ungreased, dry and over their forehead, the same way as the new band, The Beatles,” Warnke recalled.
Still a student, Mr. Heavyside worked at the Caribbean Surfboard Co. in Delray Beach, where he learned to shape and build boards.
In 1967 he and five friends chipped in $250 each, rented a small industrial space on Hypoluxo Road, and Nomad surfboards were born.
A year later, he opened the Nomad Surf Shop in a corner of his father’s TV shop. 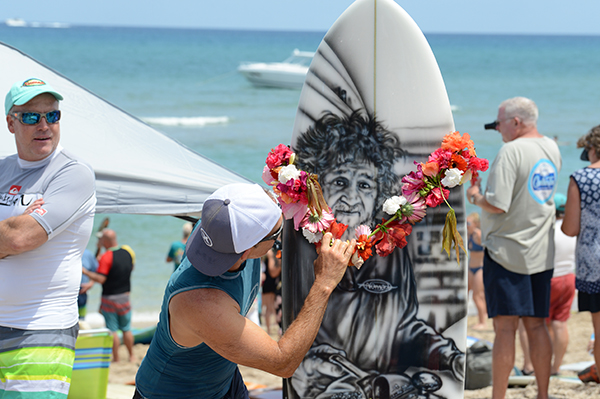 In 1974, Mr. Heavyside married the former Beth Walsh, whose business acumen allowed the shop to expand the inventory into beachwear and attract customers beyond the surfer clientele.
The couple had two sons, Ronnie and Ryan. Mrs. Heavyside died in 1997.
For a time in the 1980s, Mr. Heavyside owned Nomad shops in Delray Beach, Boca Raton and Cocoa and traveled the East Coast selling his boards wholesale. But he always remained more surfer than businessman.
“Ron Heavyside was independent,” said Warnke, now executive director of the Palm Beach County Surfing History Project. “That’s what nomads are. He was unique and did things his own way, when he wanted and how he wanted.
“I remember calling on Ron as a Costa Del Mar Sunglasses sales rep in 1983,” Warnke said. “Sometimes it would take a few appointments to finally write an order, or Ron would get interrupted and disappear.”
In his later years, Mr. Heavyside’s sons took over the daily operation of the business while he remained a friendly presence, riding a golf cart around the neighborhood, visiting the ocean and greeting Nomad friends and customers.
At the memorial service, Ryan Heavyside was clearly moved by the size of the crowd.
“Hey, everybody,” he began, “I just want to say ... wow!”
His father had loved telling stories, Ryan Heavyside said, and so he encouraged people in the crowd to do the same. And they did.
One by one, men and women took the microphone to praise Mr. Heavyside as a father and friend, employer and customer, surfer and maker of surfboards.
The Rev. Wendy Tobias of St. Joseph’s Episcopal Church in Boynton Beach presided over a brief religious service.
“O God,” she prayed, “the waves speak to our hearts. They rise, gain momentum, fall, and draw us into deeper levels of consciousness. Thank you for this place of rhythm and harmony, a resting place for Ron, a place to which we too retreat when life seems confused and overwhelming, a place in which we find joy.”
And then many in the crowd, bearing surfboards, headed for the ocean, to paddle offshore and form a large circle.
Ryan and Ronnie Heavyside joined them, bearing their father’s ashes, and after a brief moment of silence, Ron Heavyside, surfer, was home in the ocean once more.
In addition to his sons, Ronnie and Ryan, he is survived by Ronnie’s wife, Danielle, their son, Reef, and Ryan’s fiancee, Taylor Buczynski.