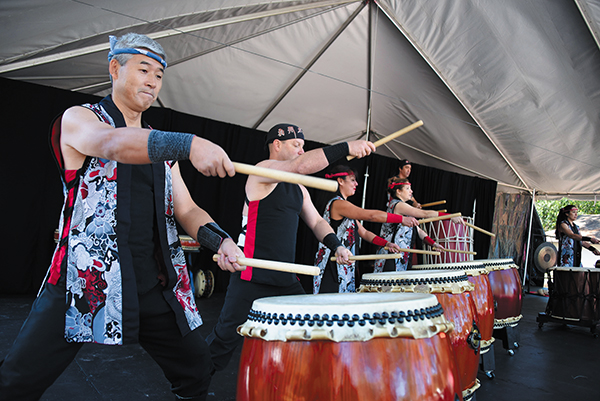 Taiko drummers pound out music for the Japanese New Year at the Morikami Museum. Photo provided

This is the first in an occasional series about traditions that accompany the start of a new year.

Happy 2018, everyone!
New Year’s is our only truly global holiday. Everywhere you go there’s a New Year’s Day, and only a few places on the planet where it passes unnoticed.
Over centuries, the cultures of the world have developed customs, traditions and superstitions surrounding the new year, most designed to bring prosperity and ward off bad luck in the year ahead.
If you lived in Spain or Chile, chances are you ate 12 grapes at the stroke of midnight, one for each chime of the clock. If you lived in Switzerland, maybe you purposely dropped a scoop of Rocky Road on the floor. It’s supposed to signify the abundance you hope for in the coming year. Raising our glasses and toasting the new year as the clock strikes midnight is one of America’s most enduring traditions. Nearly every celebration or party, public or private, culminates in a champagne toast at midnight, often with a backdrop of fireworks. Americans like toasting so much, we make it part of nearly every celebration.

A variety of traditions
Shane Peachey, general manager at the Delray Beach Club, said the New Year’s Eve party is one of members’ favorite celebrations at the club. The annual party is a “not too big” black-tie affair for about 150 people.
The outlook for the new year has been largely positive, Peachey said.
“I would generally say that people are feeling good about the new year. Of course, it’s hinging on the stock market.”
Doesn’t everything? Getting your finances in order — clearing out debts and personal obligations — is an important part of many new year celebrations.
The ancient Romans changed the calendar to begin the year with the month of January, which they named for Janus, the two-faced god who looks both into the future and into the past. January became synonymous with a thorough housecleaning. People in Buenos Aires, Argentina, shred old documents and papers to symbolize leaving the past behind, and around noon on New Year’s Day, they throw the scraps of paper from windows all over the city in a shower of confetti.
Of course, if you’re planning to shred the mortgage, it’s probably a good idea to make sure those documents are free of sensitive information. Confetti thrown during the Macy’s Thanksgiving Day Parade in 2012 contained confidential data from shredded police reports.
Peachey says he, like millions of others, makes the “same old resolutions” (drink less, exercise more) every year. Historians trace that practice back to the Babylonians as early as 2600 B.C. After examining the past, the ancient people would make plans for improvements.
Some traditions aren’t so introspective. In Ireland, to drive out bad luck, the Irish pound the walls and doors with a special Christmas bread.
In Denmark, people save their chipped dishes and plates and smash them on the doorsteps of friends and neighbors. If you’re mad about a big mess, don’t be. The more shards of tableware on your doorstep, the more beloved you are!
Some traditions are literal: A custom in many Latin American countries, including Mexico, Ecuador and Colombia, suggests that if you want to travel in the new year, you carry your suitcase with you everywhere you go on New Year’s Day.

Morikami makes a splash
In Japan, New Year’s is one of the most important holidays. People are off work and travel home to be near family and friends. At the Morikami Museum and Japanese Gardens in Delray Beach, the New Year is celebrated with Oshogatsu, a daylong festival and one of the Morikami’s most popular special events. It’s Jan. 7 this year.
The family-friendly activities reveal many of Japan’s favorite customs, including the rice-pounding ceremony (mochitsuki), Taiko drumming performances and shishimai, the traditional lion dance performed to the sounds of flutes and drums.
“We have activities all day long,” Morikami’s marketing and events coordinator Jillian Kogan said. “Lots of things for kids and families to do.” Mochitsuki, the rice-pounding ceremony, is a rhythmic spectacle, with two people working together to make mochi, little rice cakes. One person mashes a sweetened rice paste with a big hammer called a kine, while the other quickly scrapes up the smooth paste and replaces it with more paste to be pounded. The smooth paste is shaped into mochi and left to cool. The cakes can be eaten as they are or added to a sweet or savory dish.
The simple act is a tradition with deep roots. Mochi cakes have been part of Japanese culture for more than a thousand years.
Oshogatsu will celebrate 2018 as the Year of the Dog, from the Japanese zodiac. People born in the Year of the Dog are trustworthy and loyal friends, humble, dependable and good secret keepers (much like our four-legged pals). People born in 2006, 1994, 1982, 1970, 1958, 1946, 1934 and 1922 were born in the Year of the Dog. In Japan, it’s popular to host “forget the year” parties, and Kogan gets it. “It was a long year, and a lot of things went down,” she said. “But I think everyone is optimistic about the new year.”
Other traditional activities at Oshogatsu include omikuji, or New Year’s fortune-telling, and hanetsuki, a game similar to badminton but played without a net.
For people 21 and older with a taste for sake, Oshogatsu offers a new avenue to explore Japanese culture in its sake-tasting room. This VIP experience offers tastes of rare, high-end sake, plus Japanese beer and sake cocktails. Carrie Becker, a certified advanced sake professional, will hold a few informal talks and will be available throughout the day to answer questions about the fine rice wines. Fireworks or a flaming log
Delray Beach’s nod to the start of 2018, First Night, has already passed.
A relatively new celebration inspired by similar events in Boston and other cities, First Night debuted at Old School Square 20 years ago. It’s a family-friendly evening stretching across Atlantic and Swinton avenues with food trucks, music, dancing, interactive games, performances and fireworks from the top of the Old School Square garage. Fireworks, invented in seventh-century China, have long been a part of New Year’s parties. The sparkly displays were believed to ward off evil spirits. Americans much later picked up the tradition. 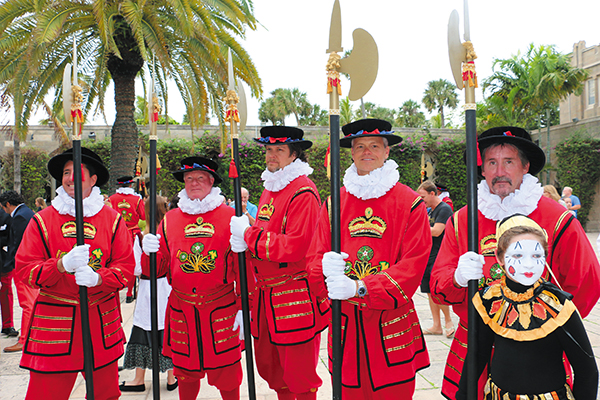 The Episcopal Church of Bethesda-by-the-Sea will host its Boar’s Head and Yule Log Festival on Jan. 6-7. Photo provided

Another highly anticipated local New Year’s celebration is the Episcopal Church of Bethesda-by-the-Sea’s annual Boar’s Head and Yule Log Festival, a tradition on Palm Beach since 1977. The gothic church is a perfect setting for time travel back to England in the 14th century, when wild boars terrorized the countryside and a successful hunt and the subsequent feast were believed to mirror the triumph of good over evil — and the triumph of Christ over the sins of man. The yule log’s lore requires it be robust enough to last for the 12 days of Christmas, and still have enough burn to start the specially chosen yule log the following year.
On Jan. 6 and 7, dozens of cast members of all ages, including the Bethesda Choir, the Palm Beach Pipes and Drums, and other musicians and vocalists, will dress in elaborate period costume as lords and ladies, shepherds and huntsmen, sprites and jesters, to perform Christmas carols, traditional dances, and celebrate the birth of Christ as they did 800 years ago. A live Nativity scene is always a touching part of the event. The festival takes place the Sunday closest to the Epiphany, the 12th day after Christmas, which commemorates the arrival of the Three Kings or wise men in Bethlehem.
For this year, the 40th anniversary of the festival in Palm Beach, a special third performance has been added on Saturday.
This performance was formerly open only to church members and families of the cast and crew. Last year, more than 1,000 people relived the story of the birth of Christ at Bethesda’s Boar’s Head festival, and that doesn’t include 150 cast and crew members who make the show happen each year.
“For a lot of families, it has become a tradition to participate in the performances every year as part of the cast or crew,” said Renée Boger-Cheifet, communications coordinator for Bethesda.
And just like that, a new tradition is born.

Traditions for a New Year

So many customs! Where did they come from?
• Why is it called a toast? The term originated in 16th-century England when floating a piece of fried or toasted spiced bread on top of a drink was a common practice. Naturally, it soon became commonplace for the act of raising a glass to be called a toast. The earliest literary mention may be Shakespeare’s The Merry Wives of Windsor. Americans love a good toast and the longer the better, it seems. Why can’t we just keep it simple with a hearty “Cheers” or “To your health”?
• Why do we toast with Champagne? Most people probably don’t toast with Champagne. They toast with sparkling wine. True Champagne, that is, Champagne with a capital C, is a sparkling wine that comes from the Champagne region of northeastern France.
Bubbly wine from other regions is technically not Champagne, though people tend to use champagne with a small “C” for sparkling wine. Initially, Champagne was just a happy accident that occurred when wine fermented. It was first reserved for nobility, but common folks fell in love with the bubbly beverage, saving it for special occasions such as weddings, parties and New Year’s Eve.
• Why do we sing “Auld Lang Syne”? The song title means “times past.” Beyond that, it’s hard to say. Our resident Robert Burns scholar, FAU’s Dr. Carol McGuirk, once told the Chicago Tribune that the lyrics don’t tell enough of a story to really analyze. McGuirk said it’s the “emotional chord” of the song that we’ve become attached to. By the time most people get around to singing the song, they don’t know what they’re singing anyway. It’s safe to say that Burns would be surprised that his most remembered contribution to modern society is a song no one understands.
• Why does that ball drop? The ball is a time ball, an obsolete time-keeping and signaling device for ships’ navigators. A large, painted wooden or metal ball that dropped at a predetermined time allowed ships offshore to confirm the setting of their marine chronometers, because accurate timekeeping is required for calculating longitude at sea. Only a few such balls still exist, and they’re just tourist attractions now. The Times Square time ball is easily the most famous time ball of all, unless you live in Key West, where the conch shell drop and the drag queen drop duke it out for the most beloved.
— Janis Fontaine