This is one of an occasional series on how various cultures celebrate the new year.

A bird. A bloom. A breeze without an arctic chill.

The signs of spring are a reason to rejoice. In many cultures, the New Year begins not in the dead of winter but in the promise of green buds, longer days and sunshine.

The people of Iran celebrate Nowruz, an ancient festival that coincides with the vernal equinox, the time when the sun shines directly on the equator and day and night are each 12 hours long. Officially, that’s when spring arrives, and many cultures recognize it for its messages of rebirth and renewal. Nowruz, meaning new day, is a happy time, pristine and full of hope.

“Nowruz is a beautiful day,” said Ali Moghani, who lives in Boynton Beach. “It’s not political, and it doesn’t belong to any religion. It recognizes what every man has in common, whether a king or a working person. There’s something special about the equinox, when day and night are equal.”

By tracking the moon and the seasons, agricultural communities knew when to plant and harvest crops, and nomadic cultures knew when to pack up and move on. The rituals and activities of society revolved around the movement of the celestial bodies. It was a constant in a world of uncertainties.

“Ancient Persians believed you had to wait until the moon reached a certain place before the festival could begin,” Moghani explained. He and his community will celebrate Nowruz on March 17 with a party even though the vernal equinox isn’t officially until 12:15 p.m. March 20 in Florida.

Families gather around a table set in a traditional way with a special tablecloth and a colorful display of seven important items, all beginning with the letter S. Each is a symbol of renewal. “Everything has to be there,” Moghani said. “Two weeks before, we plant something so we’ll have green sprouting inside, and there are certain flowers and foods we must have.”

Nowruz dates back at least 3,000 years to the pre-Islamic, Zoroastrian history of Iran.

The origin may be ancient, but the sentiment is timely: “The traditions say that we have to be good to the Earth, to value it and what comes from it. The main idea is to respect the Earth,” Moghani said.

Moghani supports the Iranian Cultural Society of Palm Beach, which hosts a friendly gathering at Okeeheelee Park in West Palm Beach the first Sunday of the month. “Our mission is to keep the traditions strong.”

Nowruz isn’t the only spring festival that commemorates the start of a new year.

Each year, hundreds of Hindus arrive at Loxahatchee Groves Park in western Palm Beach County dressed in white, where they will “greet each other with colors,” Leila Persaud explained.

By the time the revelry is over, everyone, once starkly white, will be colored by bright powder in teal and fuscia, red and yellow, green and gold.

“It’s a very important festival,” said Persaud, of Lake Worth. “It thanks God for the triumph of good over evil.”

“It’s fun for the adults and the kids,” spiritual leader Vishnu Sharma said.     Traditionally, the date of the festival falls on the first full moon in the month of Phalguna in the Vikram Samvat Hindu calendar, which puts it between the end of February and the middle of March on the Gregorian calendar. Celebrating begins the night before with a party called Holika Dahan. Holi, which is the following day, is like New Year’s Day.

Holi celebrates the end of winter, the arrival of spring, the victory of good over evil. It’s a time of rejoicing and singing, frolicking and feasting. But the day also has a serious side: Holi is important for clearing the slate for the new year. People pay off their debts and mend relationships, forgive past wrongs and ask for forgiveness.

The festival is widely celebrated in India and Nepal, and its popularity is spreading through Europe and the United States like colored powder on the white cloth.

Holi food is all vegetarian, Persaud said. With donations from local businesses, the women of the mandir prepare saffron rice and beans, using time-honored Indian recipes and great skill.

Holi doesn’t have any religious rituals to be performed. During Holi, people regardless of their sex, color, caste or creed join together to spread a message of love, unity and peace. There’s a ritual the night before, with a bonfire, but the Holi is all about having fun and enjoying friends and family.

Other celebrations that mark the beginning of spring  include Japan’s Shunbun no Hi, which is celebrated by visiting and cleaning loved ones’ graves and having family reunions.

The Mayan celebration of the Return of the Sun Serpent also took place during the vernal equinox, and a festival still is held at El Castillo pyramid in the Chichen Itza archeological site during both the vernal and autumnal equinoxes. The late afternoon sun casts a shadow that makes it look like a snake is moving down the pyramid.

In Egypt, Iraq, Libya, Sudan and Syria, Mother’s Day is celebrated on the vernal equinox. Egypt was the first to celebrate Mom, beginning in 1956. The other countries followed.

At Stonehenge, the vernal equinox is an important time for New Age followers and Wiccans. At least 100 people show up each year to welcome spring in complete silence.

Who celebrates: Some Nahua communities in Mexico

How they celebrate: Candles, fireworks, drumming and singing are all part of the festivities.

When: March 18, based on the lunisolar Hindu calendar.

Who celebrates: The Maharashtra Hindus. Similar celebrations are held by the Telugu, Konkani and Kannada Hindus.

How they celebrate: The day starts with a spring cleaning, followed by making colorful decorations on the floor and erecting colorful silk scarf-like cloth tied at the top of a long bamboo pole called gudi. Street processions, dancing and meals with traditional foods that always include both sweet and bitter flavors are part of the festival.

Where: Mainly celebrated in Bali, Indonesia

Who celebrates: Hindus celebrate, but others are respectful of the holiday. Non-Hindus observe the customs that prohibit work, and even the airport is closed for the day.

How: Nyepi, a national holiday since 1983, is a day of silence and self-reflection, fasting and meditation. The day before the new year, custom says the Lord of Hell sends out devils that must be cleared out before the new year begins. People make papier-mâché effigies that they parade through town before burning them, which is followed by a feast with music and dancing.

What: Holi, the Hindu New Year, a colorful celebration with food and music 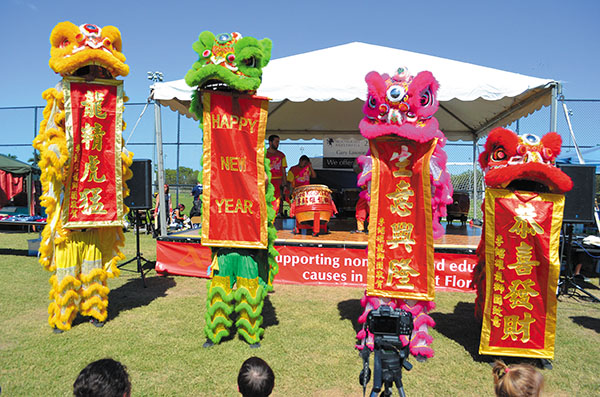 A leftover from last month’s Chinese Festival, the show will have many elements of the Chinese New Year.

There’s also a large food court, yoga demonstrations and henna tattoos, and the kids will enjoy the carnival rides and games. About 15,000 people are expected to attend.