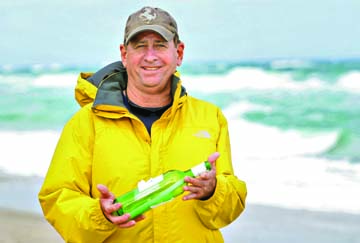 Early on the morning of his mother’s death, Tim Paller went for a walk on the beach.
“I was just watching the sunrise, seeing what had washed up overnight,” he remembers. “I was almost exactly in front of the Gulf Stream Golf Club, just about to leave, when I looked down and there it was in the weeds.”
A green wine bottle.
“I could see the message immediately, so the first thing I did was take a picture on my smartphone.”
This was Thursday, Oct. 31. Halloween. The label was all but washed away, the message neatly folded, the neck plugged with a cork. The time-stamp on the picture says 7:10 a.m.
Paller was not unfamiliar with messages in bottles. A year before, on Aug. 12, 2012, while walking that same stretch of beach, he’d happened on another message in a bottle, set adrift by a Danish family on a passing sailboat.
Paller tossed the new bottle unopened in his Ford van and drove off, intending to read the message later.
And then, shortly after 8:30 a.m., the smartphone rang. His twin sister, Joan Lorne, was calling, and Paller forgot all about that bottle for two days. Their mother had just died in her Boynton Beach home.
Paller and Lorne are familiar with death. Lorne & Sons of Delray Beach, founded by Joan’s father-in-law, has been in the funeral business since 1957. Their mother, Colette Paller, was 84 and had been in failing health. The news was saddening, but not surprising.
Two days later, on Saturday evening, Joan invited Tim; her daughter, Jackie Kingston; and son, Colin Lorne, over to her Delray Beach home for a simple meal. A thoughtful neighbor had dropped off a taco casserole. Tim was relaxing after the meal when he suddenly remembered the message in the bottle and fetched it from the van. 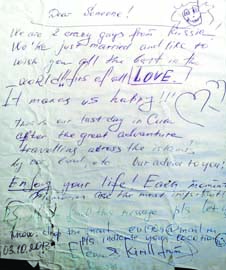 A portion of the letter Elena Ustinova and her husband, Kirill, placed in a bottle and dropped in the ocean from Cuba that made its way to Gulf Stream beach.

The family read it together:
Dear Someone!
We are 2 crazy guys from Russia! We’ve just married and like to wish you all the best in the world!! First of all LOVE. It makes us happy!!!
This is our last day in Cuba after the great adventure travelling across the island’s by car, boat, etc. Our advice to you: Enjoy your life! Each moment. Memories are the most important.
P.S. If you find this msg please let us know. Drop the mail. Pls indicate your location.
Elena & Kirill from Russia.
“I thought it was very moving,” Paller says. “I didn’t want to puddle up in front of my nephew, but I was moved.”
Enjoy your life! Each moment. Found just as their mother was about to die. Memories are the most important.

“We were comforted by it,” Joan Lorne says.
Now they wanted to know whom to thank for the comfort that bottle had brought.
Elena From Russia had included her email address in a margin. The next day, Jackie Kingston responded.
“Hi. We are in South Florida and found your bottle on the day our grandmother died (yesterday). Very very touching, Please write back.”
The day after that, Elena Ustinova wrote back, from Moscow.
“This is great that you found my message!” 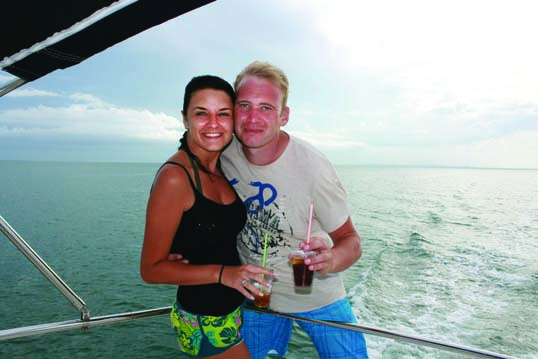 Elena Ustinova and her husband, Kirill, stand on a boat near Varadero, Cuba, where he dropped the bottle in the Gulf of Mexico. Courtesy photo

Elena Ustinova and Kirill Gagin had met in Moscow four years ago and wanted to be married on a sunny beach somewhere far from Russia. Contacted by The Coastal Star, Ustinova elaborated on their adventure.
“We traveled across Cuba almost 10 days by car visiting different places,” she wrote.
“We talked a lot with locals about Cuban history and traditions. People with open hearts and minds. They are proud of their country suffering from poverty and hoping for future changes.”
The couple spent their final week in Varadero, an upscale resort area on Cuba’s northern coast, east of Havana. On Oct. 3, they were married in a luxury hotel there, then went by boat to a small offshore island for a wedding dinner and dancing on the sand.
“Can you imagine how much happy I was at that time?! I desperately wanted to share my feelings with someone who needed it... I took bottle and put there a message.” 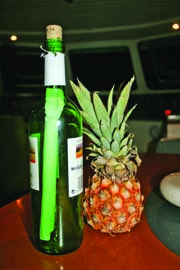 Her new husband tossed it into the sea on their wedding night, and the next morning they flew home to Moscow.
“The main idea in it was that the best in our life are memories. No matter of problems we have we should ‘lock’ moments of happiness in our hearts and keep them through the whole life. When you really love someone even if you have lost him or her you need to enjoy the moments when you were together.”
The message will probably wash ashore somewhere in Mexico, she thought. Instead, the bottle was  caught by the Gulf Stream and carried, 28 days later, to Gulf Stream beach.
“I am very sorry about your grandmother,” she wrote to Jackie Kingston.  “I want to believe that my message was a sign to you that she feels good now and she wants you to enjoy the memories of the time you spent together.”
“The timing was just unbelievable,” Paller says. “It was such a lovely, sweet, beautiful message. I wanted to show it to everyone I met.”
In the weeks since the message arrived and her mother departed, Joan Lorne has sent occasional emails to family and friends, sharing the comforting coincidence.
In the subject line, she writes, “From Russia With Love.”