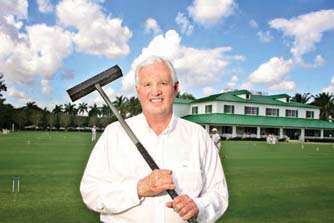 Michael Todorovich can tell you the exact moment he got hooked on competitive croquet.

A big man — 6 feet, 5 inches tall — Todorovich had always been an athlete, playing high school and college basketball and football. He even held the shot put record for his St. Louis high school.

Later came competitive golf, with Todorovich traveling the country to play in amateur tournaments. Earning a 2  handicap, Todorovich played on some of the top courses in the world and had the chance to play with some of golf’s greats, including Jack Nicklaus.

But time took its toll;  bad knees and a bad back transformed the once-competitive golfer into an occasional social golfer.

Then, in 2007, after he had moved to Key Largo, a friend invited Todorovich to play croquet at the courts down the street.

Later the friend invited him to play in a tournament.

Todorovich made it to the finals of the second flight and had a make-it-or-break-it shot that eventually would turn his view of croquet upside down.

“In order to have a chance at winning, I had to hit the ball 25 feet,” he said. “At that moment I felt the exact same emotions I used to feel playing competitive golf.”

With the pressure on, Todorovich made the shot and won the championship for the second flight — all in his first tournament.

Recognizing that he could reignite his competitiveness in a sport his body could handle, Todorovich immersed himself in croquet.

A Highland Beach resident for about a year and a half, the now 67-year-old Todorovich went on to become the U.S. Croquet Association’s 2007 Rookie of the Year.

These days he’s playing in about a tournament a month and is a formidable opponent on the court.

In January, Todorovich ended up winning the Championship Flight singles in the prestigious Beach Club Invitational in Palm Beach, which drew some of the top players from around the country. In that same tournament, he went on to take the top spot in the championship doubles, beating out players with handicaps lower than his 1.5.

While golf is more physically demanding, he says, there are aspects of croquet that make it equally challenging.

“There’s infinitely more nuance and strategy,” he says. “In croquet, strategy is everything.”

That’s not to say that skill isn’t important. Hitting the ball just a fraction of an inch off target can make the difference between a good shot and a poor one.

“In croquet, the physical movements are simplistic but they require absolute precision to be successful,” he said.

A freight broker with an office in Boca Raton, Todorovich says he continues to look forward to the challenges that come with playing competitive croquet.

“It keeps me from being bored,” he said. “I think being bored is the worst thing in the world.”

Q. Where did you grow up and go to school?

A. I was born and raised in St. Louis and went to John Burroughs High School. I then went to Duke University, then Washington University Law School in St. Louis.

Q. What are some highlights of your life?

A. Aside from raising two wonderful children, who are now productive and quality adults, my greatest highlights are that I owned and managed nine companies, of which eight were very successful, giving jobs to hundreds of people and contributing to the economic well-being of our society. I also was an enthusiastic amateur athlete, contributing to football, basketball, baseball, track and field, rugby, golf and now croquet.  I was honored to be selected as Rookie of the Year by the United States Croquet Association in 2007.

Q. How did you choose to make your home in Highland Beach?

A. I found Highland Beach when I moved here to manage a company I have owned in Boca Raton for five years.  My company is an agent for GlobalTranz, a third-party logistics provider based in Phoenix that created an online freight management system and is booming. Highland Beach was nearby, quiet and beautiful, and perfect for me.

Q. What is your favorite part about living in Highland Beach?

A. My favorite part of Highland Beach, is of course, the ocean, which comes to shore about 50 feet from my kitchen and living room and which I view fully from the pillow on my bed. Highland Beach is also eerily and wonderfully quiet as well as neat, tidy, clean and very pretty.

Q. What’s the biggest misconception people have about playing croquet?

A. That it is the same game they played in the backyard as children where you simply hit a ball through a wicket.  Today’s game is more about the subtle nuances of strategy combined with the skill of making the seven basic shots of croquet. The complexity of the strategy coupled with the decision of which shot option to take makes it an intriguing and fascinating contest. Priorities, risk vs. reward, patience, forethought, self-evaluation and judging your opponent all come into play in every game.

Q. If you could change anything in your life, what would it be?

A. My very late ability to separate the pretty lie from the ugly truth. I was naive. In my 40s I finally realized that there is a significant portion of all societies that deal exclusively with the pretty lie and that we must be vigilant for them. They create most of the problems of the world out of their self interests and have no regard for the well-being of others or the natural rights everyone on this planet has to live their life in the manner they wish. If rational people spent more time dealing with the ugly truth and finding ways to manage its complexities, the world would be a better place.

Q. If someone made a movie of your life, who would you like to play you and why?

A. I would like Sean Connery to play the movie version of me because he has accurately portrayed bold men, righting wrongs, handling adversity well while being a gentleman to all and making a significant contribution to his cause.

Q. What do people not know about you that you wish they would?

A. I have a small piece of paper in my wallet that has the five most important things in my life written on it, my five most important goals. Six people know I have this in my wallet. It is there to remind me what I want to do with my actions every day to achieve those goals. I forget frequently so I must refer to it a couple of times a week. I even change it a couple of times a year. No one has ever seen this little piece of paper because if I let them see it, they will have an opinion, and I do not want to hear their opinion. I make all my decisions based upon these five goals. If my actions lead to them, I do it. If my actions lead me away from them, I do not.

A. The most compelling mentor I have had was the writer Ayn Rand, author of The Fountainhead and Atlas Shrugged. The message I heard from these powerful books, and all her other writings, is that we all must strive to become the best person we can within the path we have chosen. It is our job, our responsibility, to make ourselves better in every way, every day for our entire life.