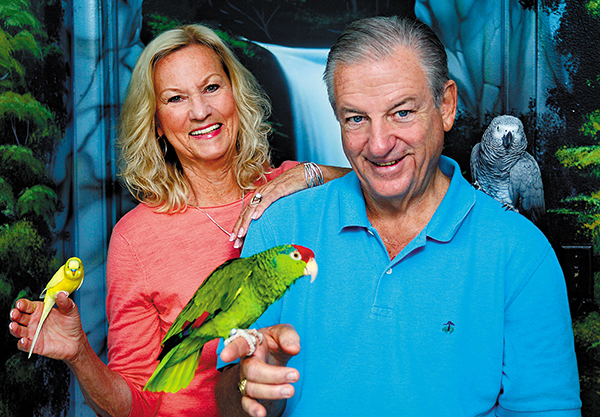 Dr. Greg Harrison’s cellphone doesn’t just ring. It also quacks.
And that’s fitting for Harrison, who for more than 40 years was known as South Florida’s bird doctor, a veterinarian whose avian specialty made him the person to see if your parrot, cockatiel or macaw was under the weather.
Through the years, Harrison’s wife of more than 54 years, Linda, has been by his side, working in their clinic and writing brochures and other materials. The two also worked together on several books.
“We were partners the entire time,” Linda Harrison says.
Now retired and living in South Palm Beach, the Harrisons no longer spend time looking after sick pet birds or helping healthy ones stay well.
They do, however, help  those who are still practicing avian medicine, with Greg serving as a mentor, a monitor for two Facebook groups and being available online to answer questions.
The two also travel often and continue to own Harrison’s Bird Foods, a company that makes organic, non-GMO food and is now run by their daughter.
A true scientist, Harrison was one of the first to focus on avian wellness, looking at ways to prevent health problems through proper nutrition.
With 160 acres of farmland in Nebraska, Greg Harrison also is experimenting with new techniques to make farming more organic and sustainable.
Both from small towns in Iowa, Linda, 76, and Greg, 75, met while in the Iowa State University Singers choral group. While Greg was in veterinary school, Linda went into education, teaching home economics.
She later founded her own company, Zoological Education Network, producing educational materials for veterinarians as well as hosting seminars.
Greg Harrison first developed an interest in birds while growing up in rural Iowa.
“It was common for people to have an outdoor garden, and we became familiar with the birds,” he said, adding that his father built birdhouses. “We’d spend hours out there watching the birds.”
As a young man, Harrison would take care of baby and injured birds.
“Holding a bird in my hand got to be a passion,” he said.
A parakeet that Harrison got as a pet while in high school sealed the deal and set him on his future path.
After he graduated with a degree in veterinary medicine, Harrison came to South Florida and soon set up a general veterinary practice near Lake Worth, with a farm nearby that included cows, pigs, horses and, of course, birds.
Birds evolved into a specialty as they grew in popularity as pets and as Harrison helped introduce an endoscopic process for determining gender.
Early on, the Harrisons started raising birds and at one point had 200 parrots on the property that were cared for partly by Linda.
Harrison became internationally known for his innovation and expertise in caring for pet birds and in 1980 was called upon to serve as the first president of the Association of Avian Veterinarians. Linda also played an active role in the international organization.
— Rich Pollack

Q. Where did you grow up and go to school? How do you think that has influenced you?
A. Both Linda and I grew up in small farming communities in Iowa (fewer than 3,500 people each) and attended an agricultural college, Iowa State University. Because of this, I think I have a better understanding of mega-agriculture and the effects of pesticides and other additives on plants, animals and the way farmland has been diminished.

Q. What professions have you worked in? What professional accomplishments are you most proud of?
A. Because I was certain when I was 9 years old that I was going to be a veterinarian, I tended to seek jobs working with veterinary clinics, although I had my time as janitor, dishwasher, warehouse operator, and milk- and paper-delivery jobs during college.
I am most proud of being instrumental in starting the Association of Avian Veterinarians, which still exists today, and of developing Harrison’s Bird Foods.

Q. What advice do you have for a young person selecting a career today?
A. The world is changing rapidly, and it is hard to know what the future of veterinary medicine or any career holds. Besides technological advancements, I would think anything to do with food and water — how it can be grown, marketed, packaged and delivered sustainably — would be beneficial to all mankind.

Q. How did you choose to make your home in South Palm Beach and what is your favorite part about living there?
A. We spent a lot of time at Lake Worth public beach when we first moved to this area, and the desire to live on the beach became part of our bucket list. Our apartment in South Palm Beach overlooks the ocean, so we are very appreciative of it for surfing, paddle boarding, swimming, snorkeling, walking and viewing turtle crawls.

Q. What book are you reading now?
A. On Tyranny, by Leo Strauss, and Iron John, by Robert Bly.

Q. Do you have a favorite quote that inspires you?
A. “In the land of the blind, the one-eyed man is king.” This proverb seemed to describe my early professional life in working with pet birds, because there were very few people who had the same interest at that time, and I was just “winging it.”

Q. If your life story were made into a movie, who would you want to play you?
A. Harrison Ford.

Q. Have you had mentors in your life? Individuals who have inspired your life decisions?
A. In Iowa growing up, I started working with the local veterinarian as a junior high student. I admired his hard work, honesty and his commitment to his family, his clients and the town.

Q. What are some of the honors you recently received?
A. In 2016, I was asked to lecture in Vienna, where I received an award from the Austrian Small Animal Veterinary Association for my work in avian medicine. Linda and I were recently in Washington, D.C., where we worked with the Avian and Wildlife Lab at the University of Miami in co-sponsoring a screening of the movie Racing Extinction to the Association of Avian Veterinarians.

Q. Do you have a favorite bird?
A. Ospreys go fishing right outside our balcony, so I love to watch them.