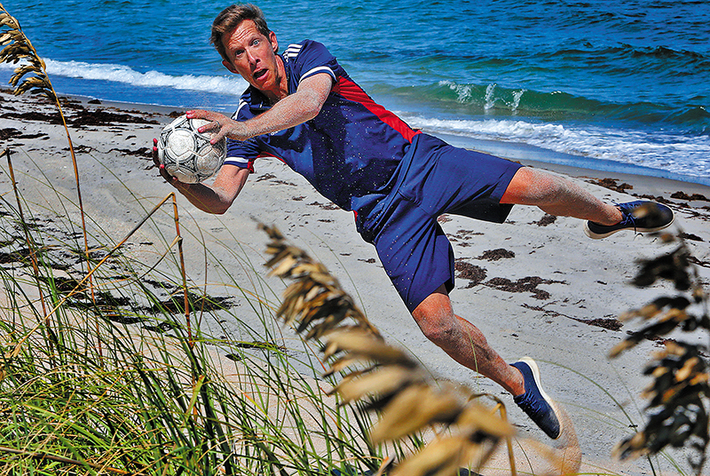 Eric Brief, a financial adviser from Ocean Ridge, will be a player coach for a U.S. masters soccer team in the Maccabiah Games in Israel, scheduled for July 2022. Brief, 59, expects to do more coaching than goalkeeping. Tim Stepien/The Coastal Star

Eric Brief is going for the gold.
A soccer player since he was a third-grader in Maplewood, New Jersey, the 59-year-old Ocean Ridge resident has been a steady competitor in the Maccabiah Games — often called the Jewish Olympics — and has been adorned with medals twice.
At the ripe age of 43, he was a member of the U.S. masters team that went to Israel thinking it would get crushed and instead came home with silver.
Then, just two years ago at age 57, Brief served as player coach for a 55-and-over team that played five games in nine days at an 8,000-foot altitude in Mexico in the Maccabiah-sponsored Pan Am Games, bringing back a bronze medal.
His medal collection, however, is still missing one and he’s hoping to fill that void when he leads 22 aging soccer players on to the field in Israel for the 21st Maccabiah Games, scheduled for July 2022.
“I have a silver and a bronze and I really want that gold,” he says.
A financial adviser who has lived in Ocean Ridge for 30 years, Brief will once again be player coach of a masters 55-and-older team. But he likely will spend more time on the sideline than playing goalkeeper, his traditional spot.
Given his experience — this will be his fifth Maccabiah Games competition — Brief knows the gold medal will be hard to capture. The competition is tough, with teams from around the world — including soccer powerhouses such as Brazil and Great Britain — also setting their sights on winning.
Still, the team he is pulling together from throughout the U.S. is gearing up for the challenge.
“Winning is everything,” he says.
If the American team will have an advantage, it is likely to be that many members have played together for decades. In fact, five of the players expected to go with Brief to games in Israel played with him on a high school team that some considered the best in the country at the time.
That team had one loss in 50 games and was New Jersey state champion two years in a row.
“Four or five of the players on that team are college coaches,” Brief said. “We’re all still pretty close.”
Although some hoping to make the team have been working for months to get back into competitive form, most are just looking forward to being a part of the competition.
Considered the third-largest sporting event in the world, the Maccabiah Games in Israel draw 10,000 athletes competing in a multitude of sports, and a crowd of 45,000 packs into a stadium for opening ceremonies.
“This is fantasy camp and World Cup combined,” Brief says.
Competing is not just about the sports, he says. It’s also about a shared culture and experiences that see no international boundaries.
“Growing up, you don’t have a lot of Jewish athletes to look up to,” Brief says. “To see a group of guys who share your culture and seeing how good these guys are, it’s inspiring. When we all meet, it’s instant family and friendship.”
Brief said the games also provide his players with an opportunity to watch athletes compete in other sports and give them a chance to stay longer and take tours of Israel. During the 2022 games, Brief’s wife, Jane, plans to join him to take in the sights.
The father of two adult sons, Spencer, 25, and Davis, 23, Brief says he and his teammates often feel their age during practice and in competition, but are able to forget how old they really are — at least for a moment — when the games begin.
“Walking into the opening ceremonies with 45,000 screaming people you feel 19 again,” he said. “It’s unbelievable.”

Q. Where did you grow up and go to school? How do you think that has influenced you?
A. Maplewood, New Jersey. The town was one big ballfield for me and my friends. The only rule was, be home for dinner before dark.

Q. What professions have you worked in? What professional accomplishments are you most proud of?
A. I have been a financial adviser for 30 years and helped open an office in West Palm Beach for a major New York firm and was named one of the youngest partners at the time. I am now proud to say I am a managing director of investments and a private wealth financial adviser for Wells Fargo Advisors in Boca.

Q. What advice do you have for a young person seeking a career today?
A. Show up. Drop your résumé off in person to the person that will do the hiring. Be persistent and hand write a thank-you note.

Q. How did you choose to make your home in Ocean Ridge?
A. My wife, Jane, found Ocean Ridge and we instantly felt at home. It felt a bit like Long Beach Island on the Jersey shore.

Q. What is your favorite part about living in Ocean Ridge?
A. There are so many great things about this town. Being able to walk to the beach, walking the dog on old A1A and seeing so many friends and neighbors. The location is amazing, being so close to Delray Beach and I-95 and halfway between Boca and Palm Beach and two airports.

Q. What book are you reading now?
A. I am a news junkie and spend a lot of time reading many different publications on business.

Q. What music do you listen to when you want to relax? When you want to be inspired?
A. I like classic rock, ranging from Crosby, Stills & Nash to The Who.

Q. Have you had mentors in your life? Individuals who have inspired your life decisions?
A. I am extremely fortunate to have a terrific father who has been a mentor and a friend. He is the most honest and honorable man I know. He served in Vietnam and spent his life as a doctor saving lives. I was also lucky to have a terrific business mentor in fellow Ocean Ridge resident Ralph Heckert. Ralph was my boss when we opened our Florida office and he moved to Florida after me. I encouraged him to move to Ocean Ridge and he moved in next door. It was a terrific decision for both of us and he still lives in Ocean Ridge as well.

Q. If your life story were to be made into a movie, who would play you?
A. My wife’s favorite movie is Sweet Home Alabama, so I would have to say Josh Lucas.

Q. Who/what makes you laugh?
A. I have a great group of friends going back over 45 years. Ten of us are going to Moab biking. We will have a lot of laughs, sitting around a campfire telling stories about the old days as well as recent events.