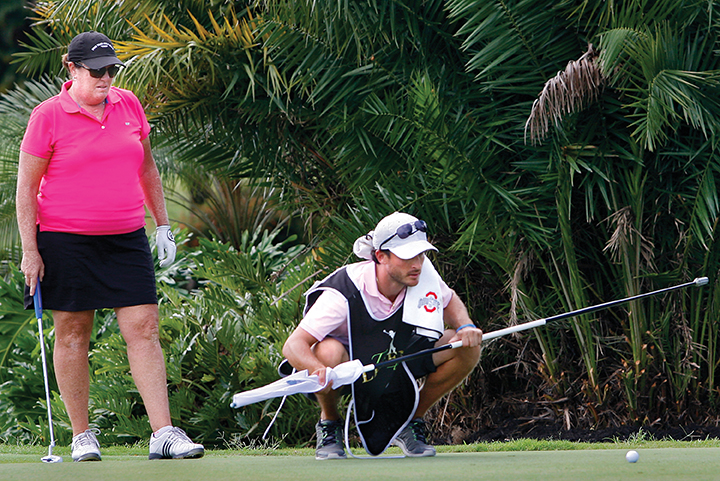 at the Seagate Golf Club in Delray Beach in early November. Mallon, of Delray Beach, made an attempt

to defend her title at the Legends Tour event.

The countless rounds former PGA Tour player Steve LeBrun has played with Ocean Ridge pro Jimmy Lytle has left him with no doubt Lytle has what it takes to reach the game’s highest level.
“He’s a good enough player,” said LeBrun, who played on the Tour in 2013 and is in the process of working his way back. “He’s got a great short game, and his long game is fine. He’s probably one of the best chippers and putters I’ve played with.
“He’s just got to get himself right from the mental side, to believe he can shoot those scores when the lights are shining brightest.”
Lytle, 29, has spent a lifetime proving himself on the links, from knocking it around with top junior players at Delray Beach Golf Course in his formative years to Pope John Paul (now St. John Paul Academy) in Boca Raton to Elon University in North Carolina to Pine Tree and Quail Ridge in Boynton Beach.
Along the way he’s met some of the biggest names in the game, from former LPGA star Meg Mallon, for whom he caddied in the recent LPGA Legends event at Seagate Country Club in Delray Beach, to Hall of Fame teacher Bob Toski, with whom he’s worked in recent years. In eight years as a pro,  he’s won 50 events — the vast majority on the Palm Beach County-based Minor League Tour. But ask Lytle to name the highlight of his career so far and he replies, “I don’t think it’s happened yet.”
He has had his moments. In 2011, he made it through the first two rounds of Web.com qualifying to reach the pressure-packed Q School, but didn’t fare well enough there to get a full-time playing card. The same year he shot 63 to win a  Web.com qualifier at Jacaranda in west Broward, then was in the top 15 after two rounds before fading.
“That was good; most people miss the cut in their first tournament,” he said. “And I’ve finished second in pretty much every state’s Open in the Northeast. So a lot of top finishes, but my best is ahead of me for sure.”
History says time is still on his side. LeBrun, of West Palm Beach, didn’t reach the Tour until he was 34 in 2013, when he played in 21 events and earned more than $330,000. Justin Hicks of Royal Palm Beach spent years working as a bag boy at PGA National before his break came in 2011 at age 36; he’s since earned more than $2.6 million.
After failing to get past the first stage of Web.com qualifying this year — the top 25 players from that tour move up to the PGA Tour every year — Lytle plans to go back to basics for 2016.
“I’ve tried to do too much the last couple years,” he said. “I’m going to throw out the window what happened this year, and maybe last year, and just go back to something I know I had success with.”
LeBrun said that what Lytle needs more than anything else is the belief that he can produce under pressure — and then go out and do it.
“The Minor League Tour, the mini-tour events, all that’s fine, but that’s not really golf,” LeBrun said. “Q School, the PGA Tour, that’s golf. Your body feels totally different than playing those other events. Maybe you’re a little nervous, but it boils down to if you can shoot good scores when your body doesn’t even feel like your body, that’s when you can go and get through this thing.
“He needs to go to Q School with the attitude of ‘I can beat anybody here,’ because he has done that. He gets and keeps that mindset, then we’ll see what he can do.”