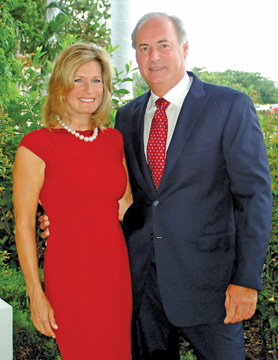 As chairs of the 57th Annual Bethesda Ball, Deborah and Harry Sargeant III of Gulf Stream are excited to be raising money for the hospital’s Minimally Invasive Robotic Surgery equipment and training.
“This equipment can see three-dimensionally inside the human body,” Deborah says. “Robotic surgery makes the doctor’s job so much easier, it dramatically reduces recovery time, and there’s less chance of complications arising compared to traditional surgical procedures.”
Deborah and husband Harry, who works in the oil and asphalt shipping business, would like to see more of the community get behind Bethesda Memorial Hospital. “It’s an amazing resource right in our backyard,” says Deborah, who serves on the executive committee of the foundation board of directors and is a past co-chairwoman of the hospital’s Women of Grace Luncheon.
“We thought it might be a nice change to do a ‘destination ball’ this year, incorporating a golf tournament the day before,” Deborah says. “We’re hoping that brings in more people from out of town and raises awareness of the ball among a broader demographic.” 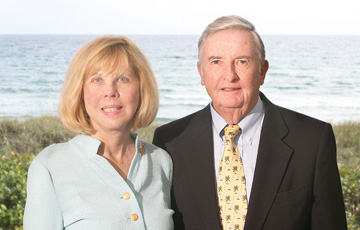 Betty and Fred Devitt Jr. of coastal Delray Beach began attending the annual Bethesda Ball in the 1960s. More import-antly, though, they have devoted years of their free time to Bethesda Hospital itself.
Fred Devitt, an attorney with Devitt, Thistle & Devitt, is vice chairman of the Bethesda Health Care System Board of Trustees and has been a member of the hospital board of trustees since the early 1990s. Also in the early ’90s, Betty Devitt, a real estate agent for The Corcoran Group, served on the board of the Bethesda Hospital Association (later renamed the Foundation).
Those years of service are being recognized this year by the selection of the Devitts as honorary chairs of the 57th Annual Bethesda Ball.
“Bethesda always tries to stay current with medical technology, and we need to keep doing that,” Betty Devitt says, underlining the importance of the foundation and its fundraising events.