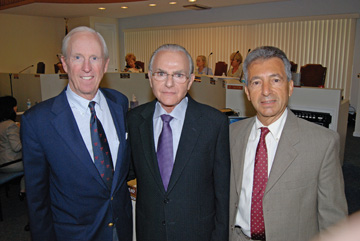 Incumbent Robert Evans (left), who ran unopposed, is joined by new commissioners Howard Roder and Louis DeStefano. In Manalapan, 209 voters of a total of 353 registered voters, or 59.2 percent turned out for the March elections. Photo by Jerry Lower

Manalapan commissioners agreed to pay a company about $13,000 to locate and map utilities throughout the town, paving the way for a plan that guides residents in landscaping swales while protecting utilities.

With the utility mapping progressing, commissioners will also trek to Lighthouse Point to view the work of a landscape consultant whom they are considering contracting to provide expertise on plantings.

Tomas Fernandez of High Tech Locating was contracted after the town struggled for nearly two months in its internal attempt to locate and map water pipes alone, devoting about $5,300 in salaries to the task. Fernandez’s work may take up to 60 days.

The commission also generally agreed it was interested in hiring landscape consultant Roy Rogers of Southeastern Consulting Group for up to $1,000 to provide expertise on plantings. The panel thought it premature, however, pending completion of utility mapping and their tour of Lighthouse Point in Broward County.

In separate action, commissioners passed on first reading an ordinance that gives them hometown rule on turtle protection in the face of increasingly strict county restrictions, according to Mayor Tom Gerrard. The ordinance still restricts lighting that can be seen from the beach, because it interferes with turtle nesting. But the ordinance focuses on lighting that can be seen from a height of 36 inches, rather than from the six feet the county requires.

Commissioners sent a sign ordinance to the zoning board to review after residents and the real estate community complained that it forced them to place real estate sale signs behind hedges and walls where they couldn’t be seen from the street. The commissioners suspended enforcement concerning those signs pending the review.

The process of hiring a town manager was progressing: Commissioner William Bernstein was authorized to negotiate a contract in a pay range of $80,000 to $120,000 with the No. 1 candidate for the job, who was interviewed along with two other candidates in March. Commissioners ranked the candidates at the regular March 23 meeting and plan a discussion during an April 6 special meeting.

Finance Director Linda Stumpf updated commissioners on the progress of a fundraising drive to refurbish the town’s library. By March 23, resident contributions had reached $47,769.67. The library committee is working on bids to replace the ceiling.

“It’s very heartening that the community has responded as it has,” Mayor Gerrard said. “I commend everyone who’s helped.”