Manalapan is no longer playing second fiddle to the town of Palm Beach — or any other Florida location, for that matter — when it comes to pricey residential properties. 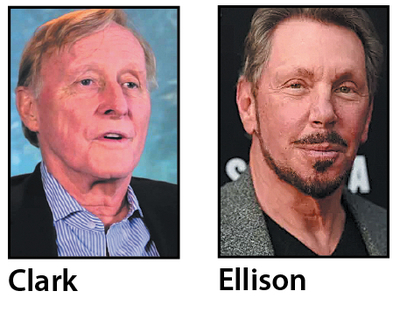 The town became home to Florida’s most expensive estate in June when Netscape co-founder James Clark sold his ocean-to-Intracoastal Waterway property to a fellow billionaire (one who has many, many more billions), Oracle co-founder Larry Ellison, for $173 million.
Clark ended up being a short-term resident. He owned the property at 2000 S. Ocean Blvd. for just 15 months, but he got his money’s worth when the final sale came through.
Clark turned a $79 million profit — an increase of 84% — on the estate that cost him $94 million, the priciest sale in town until he decided to sell it in an off-market transaction. The sale was handled by Lawrence Moens of Lawrence A. Moens Associates, who brokered both sides of the deal. Moens had also handled Clark’s earlier purchase.
The buyer was listed as Florida Realty LLC, a Delaware corporation with a California address that is the same as the one for the Larry Ellison Foundation. Besides the 15.65-acre main property, Ellison took ownership of an approximately 7-acre wildlife sanctuary space on Bird Island.

Forbes ranks Ellison as No. 8 on this year’s list of the world’s wealthiest people. His reported net worth was hovering around $93 billion at the end of June, while Clark, ranked by Forbes around No. 950, was worth about $2.9 billion.
Last year, Ellison paid $80 million for an oceanfront North Palm Beach estate. He also owns almost all of the Hawaiian island of Lanai, plunking down $300 million for it back in 2012. Other people still live on Lanai, and Ellison’s deal included a couple of Four Seasons resorts that attract the rich and famous to stay there.
His foray into Manalapan — a small town known for its expensive homes and quietly wealthy residents — had eyes popping over the purchase price.
“It’s an amazing number,” said Manalapan Vice Mayor Stewart Satter, a developer who recorded a $40 million sale of his own in March for a vacant ocean-to-Intracoastal lot. “It’s kind of hard for me to believe someone is spending that kind of money.”
Some residents may be concerned about what plans Ellison has for the town’s premier property, but Satter doesn’t think Ellison is looking to develop what he calls a “very, very, special property.” The main house is two stories and faces the ocean. Photos provided by Realtor.com

It includes a 33-bedroom, 38-bathroom main house that sits on both sides of State Road A1A, with the larger portion on the ocean side.
“He’s decided he wants some super-unique property,” Satter said. “No one is spending $200 million to develop it.”
While Satter himself was interested in the property before Clark bought it last year, he said the value in redeveloping it is overstated. The town can allow construction east of A1A in the area, which is what developers want, but Satter said the “final say” goes to the Florida Department of Environmental Protection.
“They made the requirements so strict, you effectively can’t build on the east side of the road,” Satter said of state regulators. “The requirements are so strict, you can only build a small house.”
In 2020, the town gave the previous owners, heirs of media pioneer William B. Ziff Jr., the ability to subdivide the property that they had been trying to sell since 2016, but those rights went away when Clark bought it in 2021. Clark’s purchase price was far below the $195 million the Ziffs originally sought. A seating area with cut-coral walls, pecky cypress ceilings and a wall of live orchids.

The Shutts & Bowen law firm, representing Ellison’s corporation, has requested town records of zoning and development approvals granted for 2000 S. Ocean Blvd., as well as any approvals for items such as variances, site plans or permits. The request is also for 3040 S. Ocean Blvd., which is part of the property.
How unusual is the property? Descriptions mention three tunnels that go under A1A to connect the east and west portions of the property.
One of those tunnels — “if you want to call it a tunnel,” Mayor Keith Waters says — connects the two portions of the house and includes works of art and other extravagant furnishings. “To say it’s magnificent would be an understatement,” Waters said of the underground connector.
Previously known as the Ziff estate and before that as Gemini, the property has 1,200 linear feet of ocean frontage and another 1,300 feet along the Intracoastal. Besides the main house, it has a guest house, manager’s house, two ocean cottages, tennis courts, swimming pool, regulation golf practice area, a miniature golf course and a botanic garden with 1,500 species of tropical trees and plants.
For a time decades ago, it was considered the most expensive residence in the country. It now at least holds the state title.
The previous top sale in the state was $129.6 million for a four-parcel purchase on Blossom Way in the town of Palm Beach in 2012 by hedge-fund manager Ken Griffin, said Jonathan Miller, president of Miller Samuel Inc., a real estate appraisal and consultant firm. The most expensive single parcel before last month’s purchase was at 535 N. County Road in Palm Beach, which sold for $122.7 million last year, Miller said.
“If you look at what’s available in the properties, it’s an age-old saying: There’s only so much dirt on the ocean like that,” Waters said. “Palm Beach is a big, shiny object, and Manalapan is a quiet, subtle, and in my opinion, better version.”