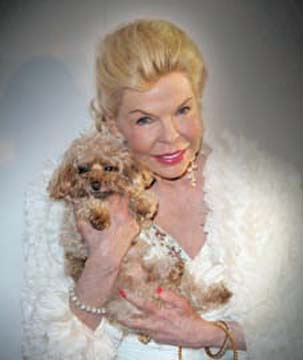 It’s a Thursday, just a little past midmorning, and Lois Pope is watching the NASDAQ on a flat-screen TV hanging in her office. The television’s small, and clearly she could afford something bigger.
But news is news.
The market’s down, slightly, but nothing alarming.
“I’ve always been interested in topical events,” says Pope, a major philanthropist who recently moved from western Delray Beach back to her beloved Manalapan. “I’m a reader. Always have been.”
She’s also a visionary, an athlete, an art lover, a onetime Broadway performer, a mother, a grandmother, a widow, a dog lover, a Philly girl, and — if you do things right — one fantastic boss.
Pope’s office assistant, Karen Fleming, has been with her 17 years. They found each other through a newspaper help-wanted ad.
At 81, Pope is one of the country’s most dedicated benefactors of causes she deems important, large and small, and it’s no short list. Her nonprofit charity, the Leaders in Furthering Education Foundation, for years sent thousands of poor children to camp over the course of a summer, allowing them the cultural and social experiences they otherwise might have done without.
She loves animals, so humane societies often benefit from her generosity.
In 1996, she gave $10 million to the University of Miami Miller School of Medicine’s neuroscience research programs. 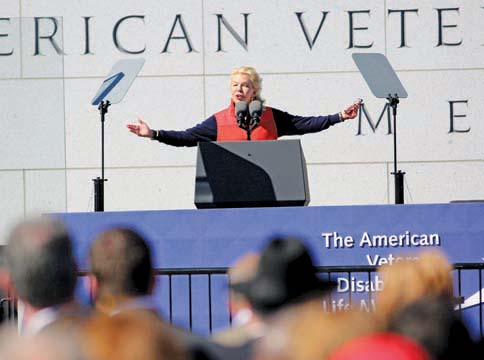 And just two years after that, acting on her longstanding obsession with the country’s propensity to ignore wounded service members once they’re back home, she started the Disabled Veterans Life Memorial Foundation. The memorial was dedicated just last month in Washington, D.C., and there she was — Palm Beach County’s very own Lois Pope — getting kudos from the president.
Next up? “Well, we have to get a Disabled Veteran’s Day,” she says, enthusiastically. “There’s a day for everything else.”
Talking with The Coastal Star at the $16.2 million Manalapan mansion she bought last spring, Pope looks relaxed and happy, and rather anxious to get on with her workday.
She absolutely will not allow a photograph. “I just went through that,” says Pope, who is almost always photographed wearing evening dresses or designer suits.
But today, the TV blaring business news, she’s wearing gym shoes, gym shorts and a LIFE T-shirt. Her hair is pulled back in her signature chignon. And while she says she’s not even wearing a smidgeon of lipstick, the onetime marathon runner looks absolutely fantastic.
Staying busy is crucial for her health, she says. The only pills she takes in the morning are her seven vitamins.
“I don’t stop,” Pope says.

She was born Lois Berrodin to middle-class parents outside Philadelphia. She has one brother, six years her elder, who is still involved in the family business, auto parts. Her mother was an elementary school teacher, and Pope credits her mom with “taking the time and the patience” to help her learn to read. Pope has fought dyslexia since she was a girl, although “then, there wasn’t even a word for it,” she says.
Pope’s mother played the piano, and encouraged her young daughter to sing along — eventually paving the way for Pope to land vocal lessons with Estelle Liebling, a renowned vocal coach who agreed to take on the young girl for just $5 a lesson. “That’s all we could afford,” she says now.
Lois Berrodin began college courses, but was eventually lured to the lights of Broadway, where she made for herself a short but memorable singing career. Once, while performing for wounded soldiers at a New York City hospital, she had an experience that changed her life. No cliché.
She reached out to a soldier, encouraging him to take her hand as she sang, but he couldn’t. He had lost his arms.
“That is something you never forget,” she says.
In 1958, Pope — who wasn’t even Lois Pope yet — married a talent agent, and they had two children. When that marriage ended, Pope met Generoso Pope, who famously turned his family business into the National Enquirer and brought the headquarters to Lantana.
Generoso Pope was only 61 when he died of a heart attack in 1988, and Lois Pope inherited his millions.
In those early years, when Generoso Pope was still building the National Enquirer into an empire — an empire that would end up financing Lois Pope’s philanthropy today — the couple and the two children they had together made their home in Manalapan.
Pope says she fell in love with the quaint neighborhoods in the late 1960s, the minute they drove into town.
But more than a dozen years ago, Lois Pope moved away from the island, living in a gated community in Delray Beach. “It was time to come back,” says Pope, who bought her new estate from Richard DeVos, co-founder of Amway and owner of the Orlando Magic basketball team.
Pope wanted to be back on the island, she says, close to the people who support her causes. Her big gala, the annual Lady in Red Gala, is Dec. 6 at Mar-a-Lago. Comedian Martin Short will perform.
In the meantime, amid all the hubbub that a successful Palm Beach charity event demands, there are home improvement projects of all manner flying around her new place. The first thing she did was turn DeVos’ gym into her office. He might have used the private elevator from the master bedroom to the first-floor workout rooms, but she takes the staircase to work.
There, sitting at her desk that faces the Intracoastal, she spends most days, unless she’s traveling. Networking. Planning. Thinking about her animals and her devotion to the arts and her love for children.
“I really try to answer every phone call,” says Pope, about her charity work. “You just never know when people might need help.”