Lots of people in Palm Beach County and beyond know Lois Pope as a wealthy philanthropist who has given generously to organizations that help disabled veterans, animal welfare groups and disadvantaged kids, as well as many others.

Fewer are aware, however, that Pope was a stage actress when she was young. Now, decades later, she’s dusting off her thespian skills for a role in the musical Gigi, with three performances March 14-15 at the Keith C. and Elaine Johnson Wold Performing Arts Center on the Lynn University campus. Pope plays the character Aunt Alicia.

The play — backed by the Lynn Philharmonia — is being produced and directed by Jan McArt, director of theater arts program development at Lynn, where she presents shows ranging from cabaret to new play readings.

She and Pope go way back.

“We met as Young Turks and were assigned to the same agency,” McArt said. Both were represented by the William Morris Agency in New York, the venerable entertainment and literary firm.

“There were a lot of good-looking girls,” including Florence Henderson and Shirley Jones, McArt recalled. “Lois looked like Grace Kelly and sang like a bird. We didn’t exactly love her for that.” This assessment from somebody who sang opera professionally and bore a more-than-passing resemblance to Elizabeth Taylor. 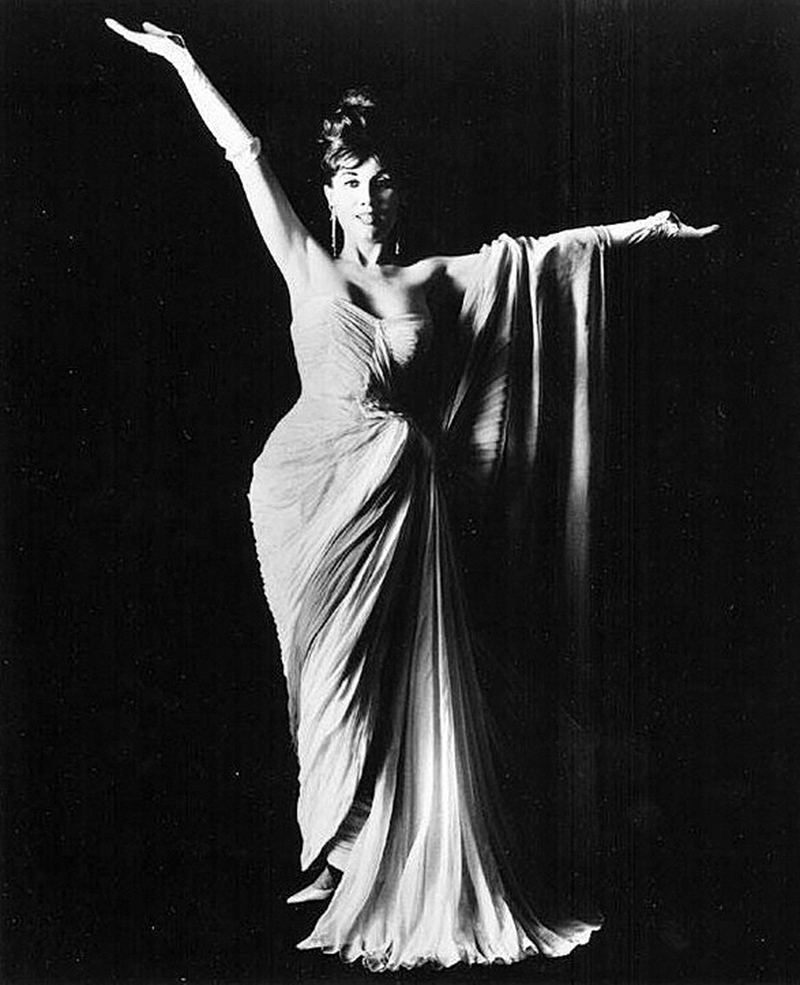 Jan McArt as she appeared in the 1960s, when she was the star of the Maisonette Room at the St. Regis Hotel in New York.

McArt’s long and varied career includes performing on Broadway and in concert venues abroad. She was even a guest on The Tonight Show Starring Johnny Carson. She ran the Royal Palm Dinner Theatre before it closed in 2001 as well as Jan’s Rooftop Cabaret Theatre and the Little Palm Children’s Theater, all in Boca Raton.

Pope was a stage actress for about a dozen years. She was Henderson’s understudy in the lead role of Laurey in a national tour of Oklahoma! in the 1950s. Henderson would later become best known as the mom on The Brady Bunch. 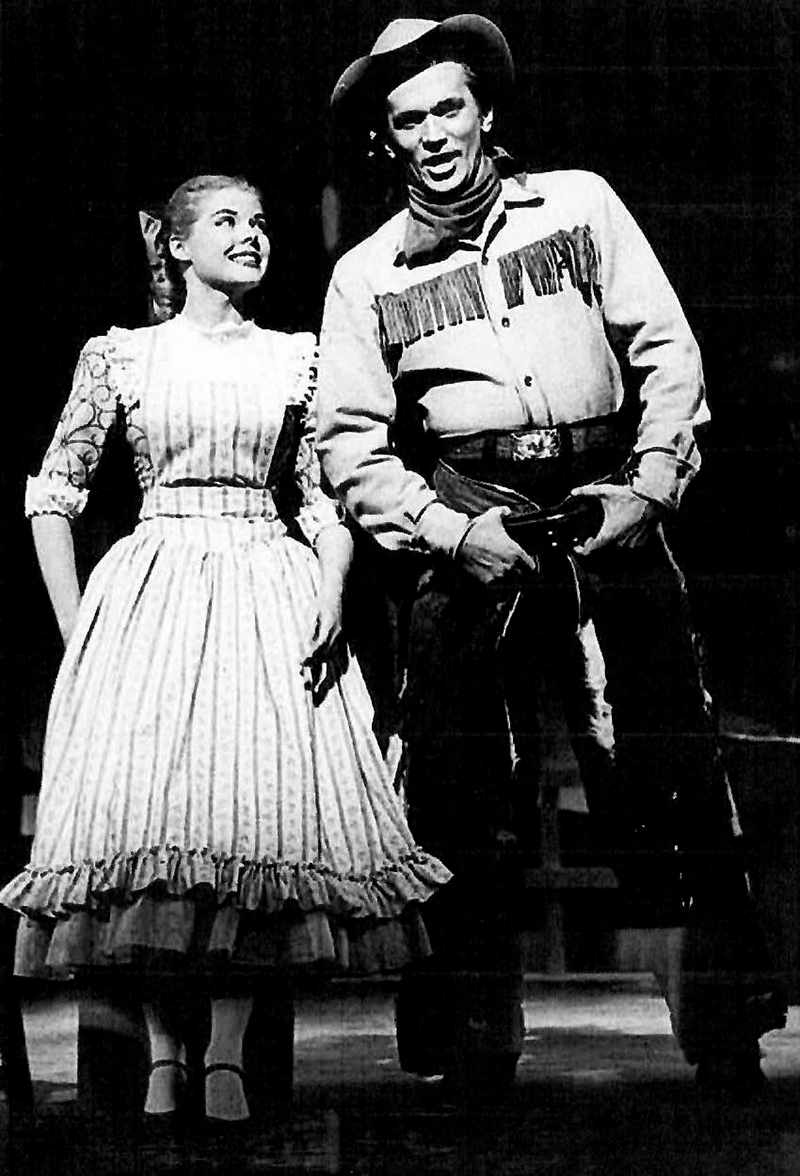 Pope stars in Oklahoma! in the 1950s at the City Center in New York. She remembers it mostly because Richard Rodgers conducted the overture. ‘What a thrill!’ she said. Pope’s stage name was Lois O’Brien. Photo provided

Pope — whose stage name was Lois O’Brien — eventually succeeded Henderson in the Oklahoma! role. She also performed in other Broadway and regional play productions. She co-starred with Phyllis Diller in Wonderful Town in Chicago in the early 1960s, did some modeling and made television commercials for products ranging from cigarettes to laundry detergent. “I made every commercial except for laxatives and tampons,” she said. “The pay was fantastic, and I was able to support myself.”

Pope’s life shifted in another direction after she married George Wood, a prominent agent at William Morris, whose clients included Frank Sinatra and Sammy Davis Jr. He died a few years later, and she later married Generoso Pope Jr., who founded the National Enquirer. He died in 1988 and she sold the tabloid for $412.5 million.

Since then, Pope has been renowned for her philanthropy, which includes $12 million to the Bascom Palmer Eye Institute in Palm Beach Gardens for research into retinal and macular degeneration.

Pope, who lives in Manalapan, seems most proud of devoting 16 years to spearheading and helping finance construction of the American Veterans Disabled for Life Memorial in Washington, D.C., dedicated in 2014.

The movie Gigi was released in 1958. It was directed by Vincente Minnelli and starred Leslie Caron in the title role. It made its Broadway debut in 1973. The story takes place in turn-of-the-20th-century Paris, where a young woman, Gigi, is groomed by her Aunt Alicia to learn etiquette and charm and become a courtesan.

A playboy member of high society named Gaston is Gigi’s friend, but his interest in her turns romantic.

And what is a courtesan? “A courtesan is a woman who has been trained for a certain skill and luxury and style of life, always supported with a man’s money,” McArt explained tactfully.

Pope didn’t mince words. “A whore. They were high-class prostitutes. But only one man at a time.”

The movie role of Aunt Alicia was played by British actress Isabel Jeans, who happened to be the first of the six wives of actor Claude Rains, the hilariously corrupt Capt. Louis Renault (“Round up the usual suspects”) in the film classic Casablanca.

Agnes Moorehead played Aunt Alicia in the Broadway debut of Gigi in 1973. She died of cancer the following year and was replaced by Arlene Francis, best known as a regular panelist on the What’s My Line? game show for 25 years. (McArt and Francis were both guests on the same episode of The Merv Griffin Show in 1962). 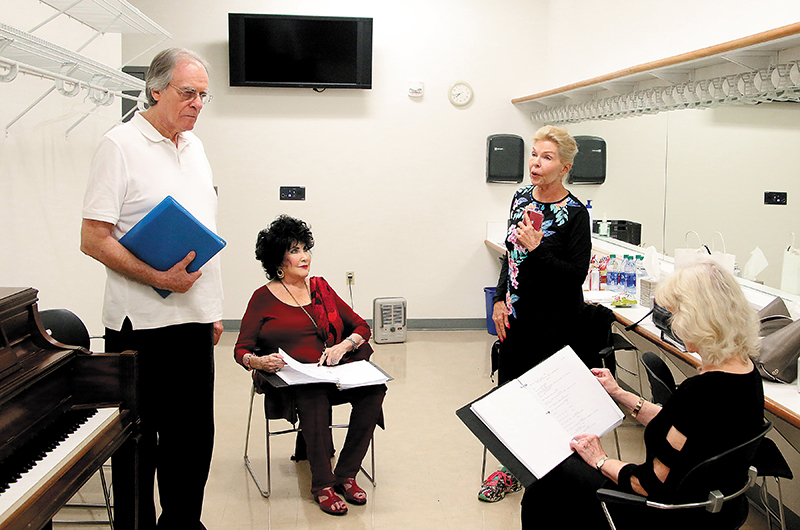 Back on the boards

Once McArt decided to produce Gigi, “I thought there was one person who would be absolutely perfect for this role,” she said. Her friend Lois Pope.

“I knew she might be interested because it’s such a wonderful part. She’s the right age. She’s the right style. She’s got a great figure for those clothes. And, she’s a hell of an actress.”

Pope said, “I like the part. I’m getting into her mind. She can be very nasty at times. She’s egotistical. But she’s knowledgeable about a lot of things, too. She’s also very good-hearted. Her goal is to make [Gigi] happy.”

Any doubts about acting after so long?

“I don’t do anything without giving it thought,” Pope said. “When I walk out on that stage, I want to give my fellow actors the very best that I can do. I’m nervous. But you know what? If you’re not nervous, you’re not any good. I work hard to be prepared.”
That she is, McArt said. “There was no hesitancy. She came into her first rehearsal and she knew all her lines. I cannot say that about many actresses.”

Pope clearly is enjoying herself. “I’m totally happy when I’m in this environment. There’s something about show people. There are no words for me to describe it.”

Is a reprise on Broadway on tap for the octogenarian?

“This is Broadway, as far as I’m concerned,” Pope said. “Broadway in Boca Raton.”

Gigi is Lerner and Loewe’s musical comedy about a free-spirited young girl living in Paris at the turn of the 20th century and the wealthy young playboy who falls in love with her as she is transformed into a poised courtesan. It includes songs Thank Heaven for Little Girls, I Remember It Well and The Night They Invented Champagne.