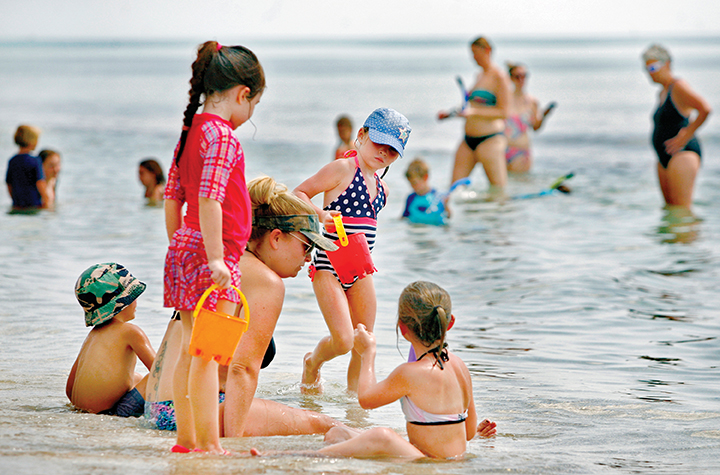 Lantana has a public beach, one of the requirements for under-the-radar beach towns in a nationwide survey by realtor.com. Above, the Ellis family of Lake Worth cools off in the water at the beach. Photos by Tim Stepien/The Coastal Star

Near the end of a Town Council meeting in May, when public comments were given, a longtime Lantana resident marched to the podium to offer her congratulations because Lantana had been named America’s fourth-best under-the-radar (and affordable) beach town by realtor.com.
“I had no idea,” Mayor Dave Stewart says when asked about the designation. He guesses the title followed some sort of polling done during the last year. But he has since learned the criteria, discovering that the honor came both for what Lantana is not as well as what the town offers residents.
For example, Lantana is not a famous beach town. It has a low Google search volume compared with hot spots like Miami Beach and Santa Monica, Calif. And it is small. Only 10,000 people live within its three square miles. Yet there are plenty of good restaurants and residents are offered beach access and oodles of amenities.
Homes are affordable, too. “You could get a condo for $50,000 or a mega-mansion for millions,” Stewart says.
All of those things were considered by realtor.com’s survey, in which Lantana came in after first-place Ocean Park, Wash., second-place Cape Canaveral and third-place Crescent City, Calif.
“We’re a little slice of Old Florida in the middle of the Gold Coast, with the kind of small-town atmosphere that has disappeared from much of this area,” says Chamber of Commerce president Dave Arm. “We have great restaurants, world-class fishing and diving, a new kayak and paddleboard park and fishing pier.” 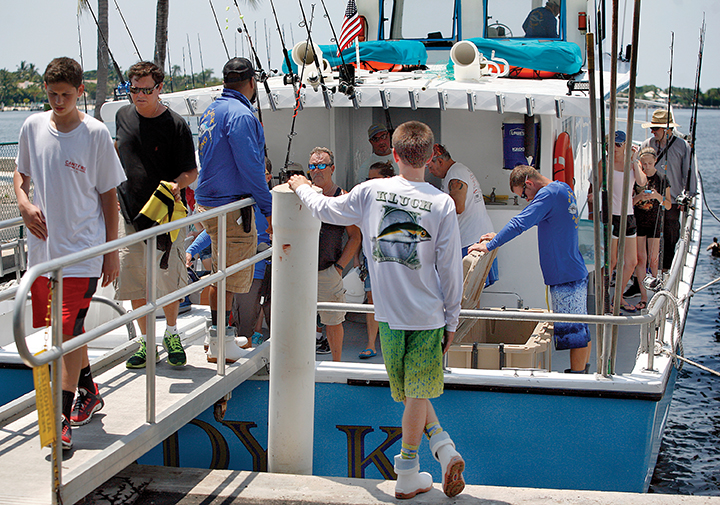 And then there’s the annual fishing fest, a three-day event attended by hundreds of residents and visitors with free family-friendly parties open to all.
“We host 50 underprivileged children at our Kids’ Derby every year, assisted by the Palm Beach Sheriff’s Office and the Lantana Police Department,” Arm says. “We give them each their own rod and reel and tackle box to keep. We take them fishing at the Lantana fishing pier at Bicentennial Park and teach them to bait their hooks, cast and fish.”
The little angler with the biggest fish wins a bicycle. Second- and third-place prizes are given, as well.
Seems the fish weren’t biting much at this year’s derby in May.
“Third-place fish was a crab,” Arm says.
“Most of these children have never been fishing, and we hope we’re kicking off a lifelong appreciation for the sea and our sport,” he says.
Arm and his wife, Renee, own Lantana Fitness.
“We enjoy seeing people of all ages and backgrounds exercising together at a true neighborhood club,” he says. “It’s that kind of community, and why we love Lantana.” 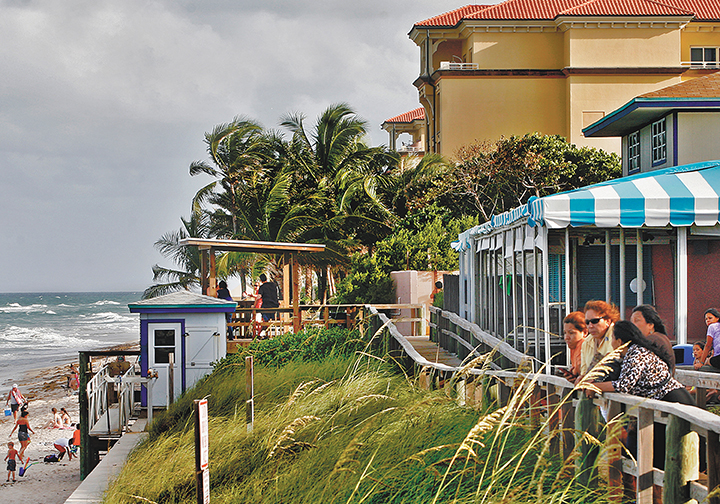 Patrons at the Dune Deck enjoy the view and breeze at the beach.

Mary Smith loves Lantana, too. A regular at Town Council meetings (she is the one who spoke about the realtor.com designation after she saw it on Facebook), Smith has lived in the town for 47 years.
“From the moment I moved here from a suburb of Buffalo, N.Y., I have loved the fact that Lantana was a small town where I could — and do — walk everywhere.
“Lantana has the best beach around, as far as I’m concerned. It is a family-friendly place and I went to it every day when I moved here. When I started a family, I took them every afternoon, as well. I still go often. Because the warm waters of the Gulf Stream come close to the beach, the water is always warm.”
The beach, with 745 feet of ocean frontage, isn’t anywhere near as wide as it was in the ’70s and ’80s and British journalists, in town for tryouts at The National Enquirer (based in Lantana then), played cricket on the shoreline. But the beach still has its charm with picnic areas, an oceanfront pavilion, lifeguard station, playground and the Dune Deck, a seaside restaurant known to locals and travelers from around the globe. 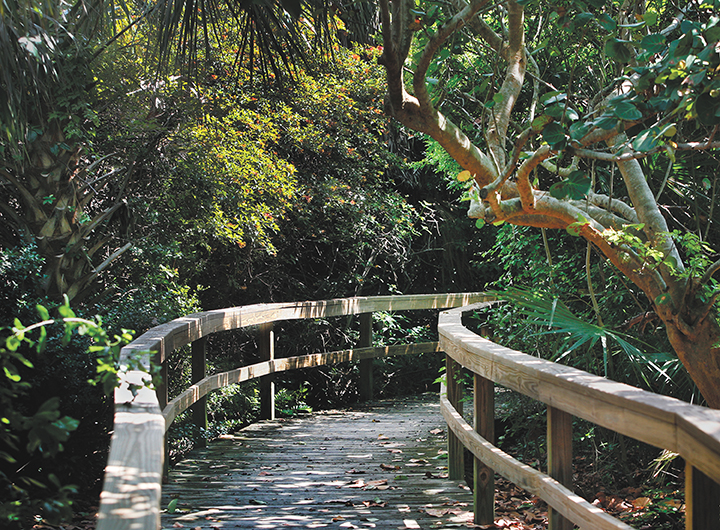 A path winds inside the Lantana Nature Preserve. The coastal hammock, often used for ecological education, was previously a garbage dump.

But Lantana’s allure extends well beyond the beach and its newly paved parking lot. One of the town’s proudest assets is the Lantana Nature Preserve, a coastal hammock between the Carlisle senior living facility on East Ocean Avenue and the Intracoastal Waterway — and simply a lovely place to take a short hike.
Other town amenities include a sports complex with baseball and soccer fields, a recreation center with tennis courts, shuffleboard courts and a barbecue pavilion and a two-acre boat launching facility. 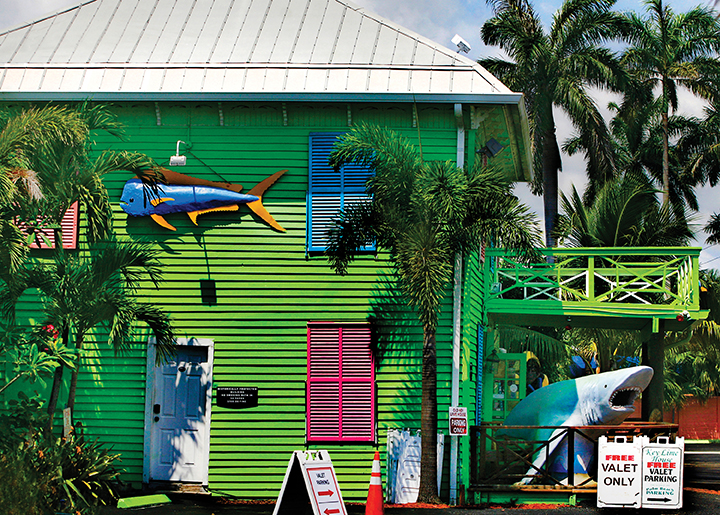 The house that is home to the Old Key Lime House restaurant, built in 1889, is one of the oldest existing structures in Palm Beach County.

Shops and restaurants along Ocean Avenue, including the iconic Old Key Lime House (one of state’s oldest waterside eateries), are thriving again since the Ocean Avenue bridge was rebuilt three years ago. 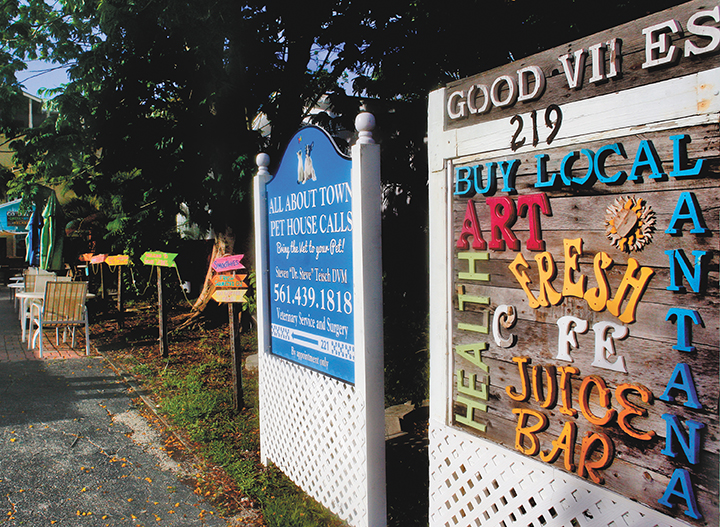 “I love the relaxed atmosphere of all our functions,” says Stewart, who exemplifies the laid-back beach town/fishing village vibe by wearing Hawaiian shirts (and often shorts) as he presides over Town Council meetings.
The town’s Fourth of July fireworks celebration is among the best around and always draws a big crowd to Bicentennial Park.
“We have movies at the beach, a dog park, a Halloween party for kids at the Nature Preserve, an all-volunteer library (except for the director), and all kinds of free events for families,” Stewart says.
“At Christmastime, our Kiwanis Club gives away 50 to 90 bikes to kids and on Thanksgiving they deliver 600 to 700 meals to people who otherwise wouldn’t have a turkey dinner,” the mayor says.
“We have our problems like any municiaplity, but it’s all those little things that make a difference,” Stewart says.
Until a few years ago, retired town Councilman Lou Canter emerged from the sea on Groundhog Day as Lantana Lou, the town’s answer to Punxsutawney Phil. With trident and stuffed fish in hand, Lou would proclaim “12 months of beautiful weather and eight more weeks of our good friends the snowbirds.”
In 2009, Lantana residents mailed hundreds of coconuts to Postmaster General John E. Potter in an effort to save their post office. And it worked, raising awareness in a nutty beach town way.
Lantana is a friendly small town, for sure.
“If you go to the Ace Hardware store, people will know you and you will know them,” Stewart says. “It’s that kind of town.”
The mayor remembers when he and his wife were house hunting in 1989, the year his son was born. They scoped out houses between Port St. Lucie and Boca Raton, looking for a place on the water.
“We wanted a place we could dock our boat and be able to get on a bicycle and ride to the beach,” he says. The search landed the Stewarts in Lantana, on Hypoluxo Island.
“The only place that came close was Sewall’s Point,” he says. “The house we liked there was on the market for $1.4 million and ours was $350,000 at the time.”
They have no plans to leave.