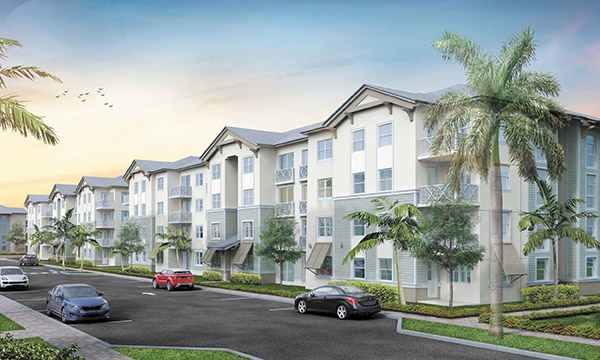 A rendering of part of the apartment complex. The developers have asked for a variance

to lower the parking allotment to two spaces per unit.

Developers for Water Tower Commons gave the Lantana Town Council a first look at what the residential portion of the project would look like, but were unable to drive home a request to reduce the required number of parking spaces.
Ken Tuma, representing Lantana Development — a partnership between Southeast Legacy and Wexford Capital — said the first phase of the luxury residential development would include a pool, dog-walking area and 360 apartments in nine multifamily buildings.
“A high percentage (46 percent) of the units would be one-bedroom apartments,” he said at the April 24 council meeting. “The three-story buildings would have entrances with breezeways to make it look special and inviting.
“Four-story buildings would have elevators. The clubhouse, the heart of the community, will be one story with two-story character and will have a game lounge and coffee bar with Wi-Fi.
“We’re going after millennials and we’re asking for some relief with parking,” Tuma said.
Town code requires 2½ parking spaces per unit, and developers asked to have a variance so that two spaces per apartment would be acceptable.
Rents for the apartments would range from $1,200 to $2,000 per month.
Tuma said the apartments would be owned, maintained and managed by the Richman Group, the country’s seventh-largest rental apartment owner.
Landscaping plans call for a variety of trees, such as live oaks, gumbo limbo and royal palms.
“We’re going to have 1.4 acres of green space,” Tuma said, that is, if the requested parking variance were to be accepted.
“These people are experts,” he said of the Richman Group. “They have done their research and from their experience this is what is needed. They have to make sure this is right.”
Representatives from the Richman Group said two spaces per apartment would be ample and that they would never skimp on parking.
But Lantana council members are sticklers for parking space requirements, as they proved a year ago when Aura Seaside, a development of waterfront property previously owned by the Cenacle Sisters, sought and was denied a reduction in the town’s parking space requirement.
“I like our code on parking spots,” said council member Phil Aridas. “I’m sticking with it.”
Mayor Dave Stewart offered a compromise, 2.15 places per unit, which the council, including Aridas, did approve.
Another motion — made and seconded after representatives from the Richman Group argued that the 2.15 proposal would throw off the entire formula, send designers back to the drawing board and likely mean a reduction in green space — made another plea for the two spaces per unit.
That motion failed by a 3-2 vote and developers were given a recess to discuss the matter. When they returned, Tuma asked for, and was granted, a postponement on further action on the project until the council’s May 22 meeting.
Water Tower Commons is a 72-acre retail and residential project being built on the site of the state-owned A.G. Holley tuberculosis hospital, east of Interstate 95 on Lantana Road. The development is expected to create 700 new, permanent jobs and generate $13 million in new tax revenue for Lantana during the next 20 years.
A.G. Holley hospital was built in the early 1950s on state-owned land and sold in 2014 for $15.6 million to Lantana Development.
The town previously approved the commercial portion of Water Tower Commons, including a grocery store, a fitness center, pharmacy, restaurants and more than 120,000 square feet of retail. Last month, the town learned that the first announced store in the development is a Wal-Mart Neighborhood Market.