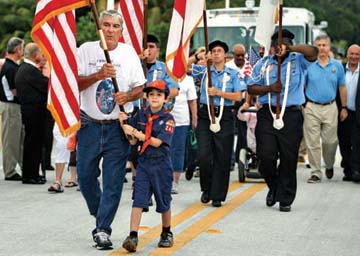 Roland Wood carries on a tradition he started in 1950 as a 13-year-old Boy Scout, when he was the first person over the then-new bridge at its dedication ceremony. Wood also was the last person over that same bridge when it closed in March 2012. Carrying the flag with him is Ramon Torres, 7, of Lantana, a Scout in Troop 241. Revelers gathered along the new Lantana Bridge to celebrate its Nov. 16 opening. The event included a
‘First ______ Over the Bridge’ parade, followed by a party in Bicentennial Park and capped off with fireworks. 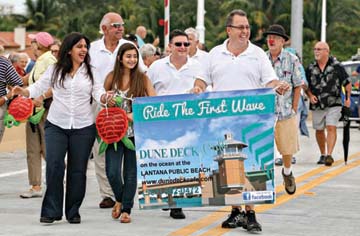 The owners of the Dune Deck Cafe march across the Lantana Bridge during its official opening Nov. 16. They were among the roughly 1,000 people who joined the walk. Tim Stepien/The Coastal Star 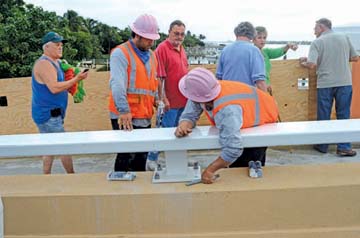 When Lantana hosted a bridge reopening bash, the town did it in fishing-village style. The celebration started with a parade over the Ocean Avenue bridge and ended with a flourish of fireworks that left spectators exclaiming, “Best finale ever!”

About 1,000 people and their pets marched across the bridge, while another 1,500 or so watched during the celebration.

Lantana Mayor Dave Stewart boasted that the bridge was finished four months early and cost about $32 million. “We saved the county taxpayers $18 million by not building a temporary bridge and about three years (of aggravation).”

The new Ocean Avenue Bridge allows easy access to the surrounding communities. The Lake Worth Bridge to the north or Ocean Avenue bridge in Boynton Beach to the south were common detour routes.

The bridge tender’s tower sports a dolphin as a weather vane, another salute to the town’s roots.

“We wanted this bridge to be more of fishing village (style) than the Disney style of the Boynton Ocean Avenue bridge,” said Mike Bornstein, then-Lantana town manager and now Lake Worth city manager.

It’s a great addition to the community because it is pedestrian and cyclist friendly, Stewart said. At 21 feet taller than the old bridge, it will have 40 percent fewer openings, making the bridge motorist friendly, too.

Since it opened, the bridge had to close overnight for two nights for painting, according to Lantana Town Manager Deborah Manzo.