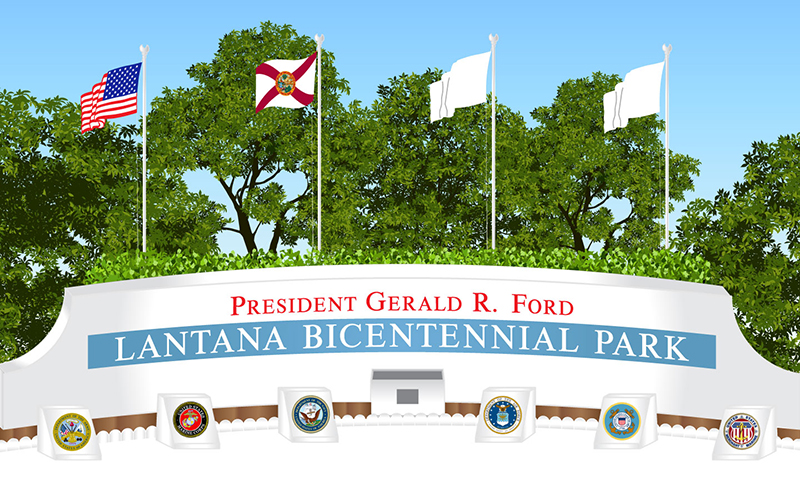 The six armed forces monuments will go in front of the Bicentennial Park marker. Rendering provided

Monuments recognizing the U.S. armed forces are in the works at Lantana’s Bicentennial Park on East Ocean Avenue. Individual markers about 20 inches high will honor the Air Force, Army, Coast Guard, Marine Corps, Navy and Merchant Marine.
The town approved the plan at its Dec. 9 meeting after hearing details of the proposal from council member Ed Shropshire, who first pitched the plan in June. Shropshire has worked with community leaders to secure funding.
Last January, when the Dollar Tree was seeking approval for its site plan, the Town Council requested the business erect artwork in the town, preferably on its site. In lieu of the artwork, the developer, Steve Dworkin, agreed to pay for the veterans monuments, including installation.
Shropshire said the town has “a bit of a dedication to our veterans” at the Recreation Center on South Dixie Highway, “but I felt we needed something more.”
“Walking through Bicentennial Park, I realized what a perfect location for something like this. I talked to Mr. Dworkin and he said he’d love to be able to donate funding for the entire project.”
Shropshire said people had asked him why he included the Merchant Marine. “People don’t realize that during World War II and Vietnam and Korea, they did serve as part of the American armed forces moving men and materials.”
While all council members said they liked the idea of honoring veterans, Mayor Dave Stewart had concerns about both the location and the funding source. He said the Recreation Center, where a large mural honors veterans, would be a more suitable location for the monuments.
“I’m not saying this is a bad project,” Stewart said, “but it’s taking money that was supposed to be used for another reason: art. I think back to 2003 when we did the memorial at the end of the rec center. Stanley Gundlach (of Gundlach’s Marina) and myself went out and secured about $10,000 in donations to have that painting done.”
The mayor said he has learned from the Cultural Council and other towns that art increases the value of a municipality, and he wants that for Lantana.
“That was the purpose of requesting it for Water Tower Commons, the 7-Eleven and certain areas that have art, and I would like to make sure we still have art going,” he said.
Shropshire said he and Dworkin had talked about art, and Dworkin and his people came up with a dead end. “One afternoon, I brought up the idea of the monument and he said he would like to do that with this money,” Shropshire said.
As far as getting new development sources to put up public art, Shropshire said: “We requested, we didn’t demand it. He just more or less volunteered for the art in public places and he and I think that this would be a good substitute because it is artwork in a sense and will honor the brave men and women of this town and provide a beautiful backdrop and be another addition to a downtown waterfront area.”
Council member Lynn Moorhouse said he thought adding monuments at Bicentennial was a nice idea.
“I frankly would rather see the six services recognized than a big butterfly at the end of the Dollar Tree or something,” Moorhouse said.
When the vote was taken, the mayor voted to approve as did the others. Council member Phil Aridas was absent. Ú