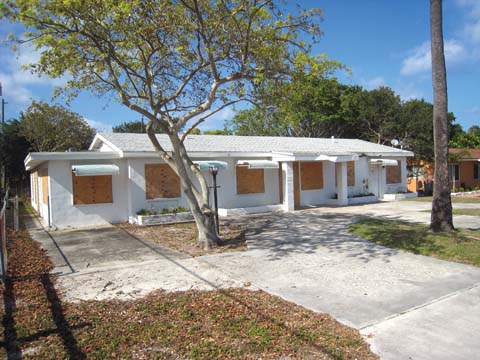 A town-owned triplex on Prospect Road could become the new home for the Lantana Historical Society.
The house at 111 Prospect Road, deeded to the town from the county last year after acquiring it from tax debt, appeared to be doomed to a wrecking ball until town officials had another idea.
“The Historical Society has been burdened with no place,” said Mayor Dave Stewart. “This could be a great opportunity for the town to have a more vibrant Historical Society.”
Despite the fact that the abandoned 2,074-square-foot house would need costly repairs and renovations, inspections revealed the 1956 building to be structurally sound.
Stewart said he was not in favor of the town doing the renovations. However, if the Historical Society wanted to tackle the project, he said the town could consider leasing the building for a $1 a year, much like the arrangement the Chamber of Commerce has for its town-owned headquarters at 212 Iris Ave.
The discussion will come up again at the council’s June 10 meeting, when the Historical Society is expected to put forth its plan for fixing up the dilapidated house.
Historical Society president Rosemary Mouring said she had visited the property with a general contractor and was “very much interested.” She said the organization would need to draw up plans and project costs to see if it could manage the undertaking.
“It’s got a lot of potential,” she said.
Some council members questioned whether the Historical Society had the financial means to handle the project.
“Roof repairs are needed, bathrooms need to be remodeled, there’s mold throughout the house, a termite problem and electrical repairs that need to be made,” said council member Phil Aridas. “Do you have $40,000 to fix up a $30,000 home?” he asked Mouring. “I think we should tear it down and sell it (the property) and put it back into the town.”
Mouring was reluctant to reveal how much money was in the Historical Society’s coffers but said “we should at least have a chance.”
Jack Carpenter, a founding member of the Historical Society, said the group had several Lantana antiques, including two 1893 desks, it would like to keep in a museum of its own. “Give us a fighting chance,” he said.
Stewart said he didn’t expect the Historical Society to do extensive work right away, but hoped that outdoor improvements, such as taking plywood off windows and securing the house, would be made during the first year.
Vice Mayor Lynn Moorhouse said he wasn’t in favor of hiring a contractor, but suggested a grass roots plan to spruce up the property.
“We’re not looking at a lot of money if you get some volunteers out,” he said.
And, in the interest of raising money for the Historical Society, Wayne Cordero, owner of the Old Key Lime House (the second oldest house in Lantana), offered to sponsor a fundraiser, which he suggested could net $25,000 for the effort.