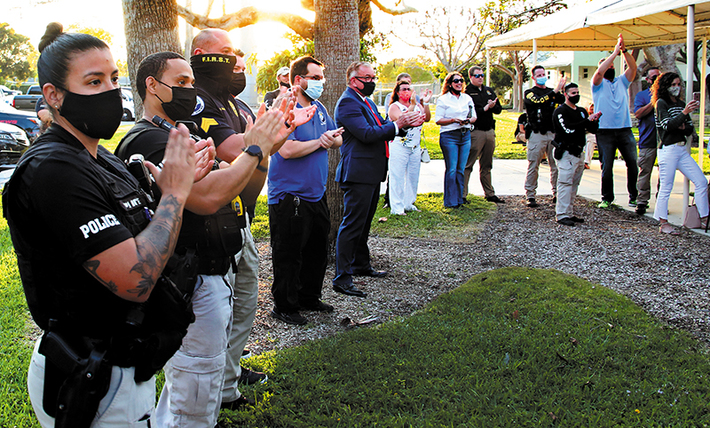 Lantana police and others applaud while listening outside the council chambers March 22 as Robert Hagerty is sworn in as mayor. Photos by Tim Stepien/The Coastal Star 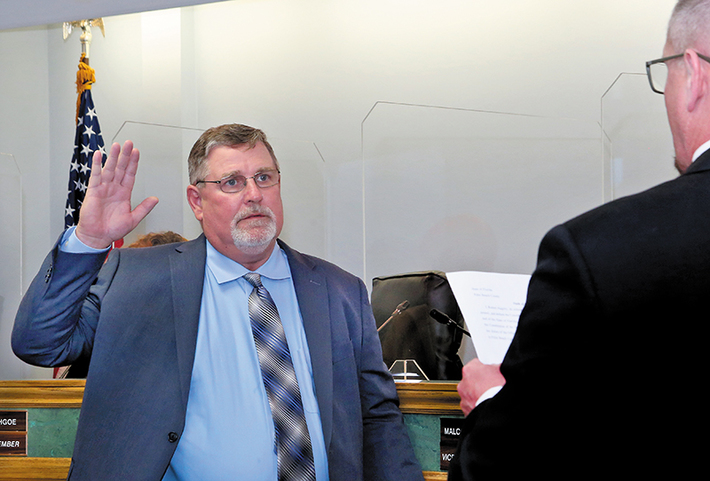 Former police commander Robert Hagerty ousted incumbent Mayor David Stewart, who has held the office for 21 years.
Voter turnout was low. Only 1,439 of Lantana’s 7,362 registered voters cast ballots in the March 9 election. Hagerty brought in 59.76% (860) of the total votes compared to Stewart’s 40.24% (579).
Awaiting the final results with supporters at Lantana Pizza on election night, Hagerty said he didn’t want to comment until the votes were certified. Reached by phone days later, Hagerty said that “based on the outcome of the election, people were certainly in favor of a change.” He said he could not speculate on whether any one thing led him to victory.
“I’m still kind of in shock that I was able to unseat a 21-year incumbent, but I’m looking forward to serving the people of Lantana and moving forward in a positive manner.”
Stewart kept his remarks short. “Congratulations to Mr. Hagerty,” he said after the election. But Stewart threw what he called a “celebration of appreciation party” for devoted supporters on March 13 at the Dune Deck.
“These were people who believed in me and supported me for 21 years,” Stewart said. “I felt so good. It almost made me want to cry with all the support they gave me.”
Hagerty, 56, a Lantana resident for 24 years, said during the campaign that it was time for a change in the mayor’s office. He promised to bring “more effective and compassionate leadership, a stronger focus on public safety, realistic visioning and appropriate beautification efforts.”
Stewart, 67, an air-conditioning consultant, campaigned on his record of fiscal responsibility, building up the town’s reserves, his institutional knowledge, relationship-building skills and having served as president and an active member of the Palm Beach County League of Cities for two decades.
He said he kept taxes low and services high.
Stewart has lived in Lantana for 43 years.