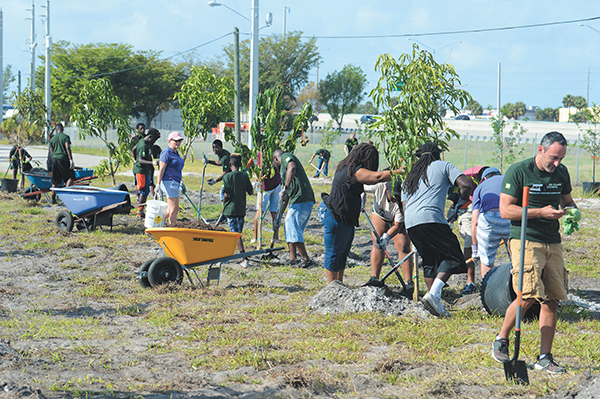 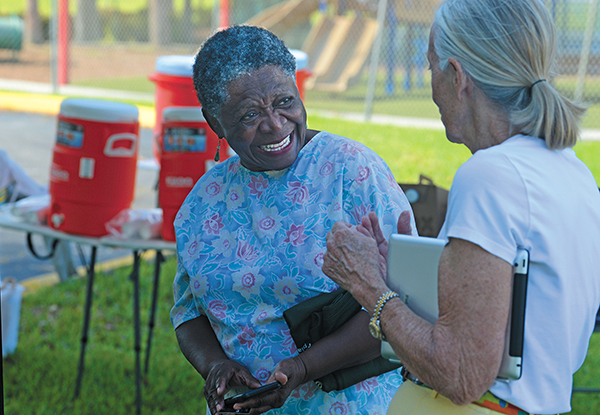 chat during the planting in the Southwest community. The garden club helped fund the project

for the nonprofit Community Greening.

To celebrate Arbor Day in late April, Mark Cassini and Matt Shipley, with more than 100 volunteers, turned a weedy, rocky field at Catherine Strong Park into a young orchard of leafy fruit trees.
As the co-founders of Community Greening, a Delray Beach nonprofit that builds community through planting trees, the two have been responsible for adding more than 300 trees to the city’s canopy since October. With their most recent project, they are turning back time for residents of the Southwest community. 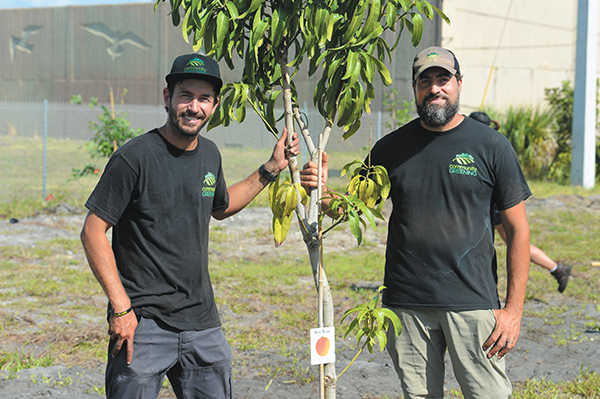 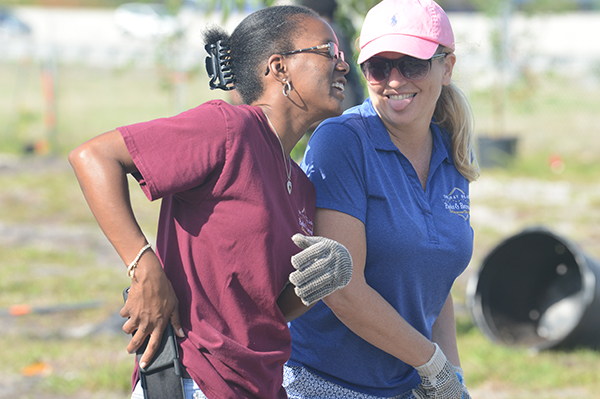 “Fruit trees have always had a cultural and historical importance to this neighborhood,” said Cassini, 37. Many of the older residents fondly remember when the “Ponderosa” was available for picking. It was a grove of fruit trees — mostly guavas — that grew untended near what today is the park.
But with development and the building of Interstate 95, the trees disappeared. Now they have been replaced by 75 large fruit and native trees on this acre that was once a drag strip and later a makeshift garbage dump.
As the trees mature, the community will be welcome to pick the fruits of their labors, including mangoes, sugar apples, avocados and guavas. And there could be other benefits, Cassini said.
Data from across the country show that more tree canopy correlates with higher incomes, increased home values, better storm water retention, cleaner air, increased carbon capture and better mental health.
Given their upbringings, it’s no wonder that these young men have taken such an interest in the well-being of those living in Delray’s Southwest community and adding to the natural beauty of the area. Cassini remembers growing up along a creek in Indiana from which he filled his bedroom with tanks and cages of snakes, turtles, fish and frogs. “I was a kid who wanted to be outside all the time,” he said.
Shipley, 30, grew up in Delray Beach, where his father was “Johnny Delray,” a well-known surfer. “He had me surfing since I was able to stand,” said Shipley. “Being out on the ocean was special to me.”
After their schooling, both men traveled. From 2007 to 2008, Cassini helped refugees in Kenya prepare to resettle to the U.S. In Miami, he worked with refugees who were torture survivors. In 2013, he came to Delray Beach to work at the Achievement Centers for Children and Families, which provides quality child care for low-income families.
Meanwhile, Shipley went to college at the University of San Diego, where he saw a time-lapse depiction of just how much garbage an individual produces in a lifetime. “By the end, the garbage covered block after block after block. That woke me up that my impact on the world is serious,” he said.
Because of his desire to help people and have a positive effect on the world, he joined the Peace Corps, which sent him to Paraguay.
“The people there think we are happy because we have things. But I think they are the happiest people on Earth with just shelter, food, water and family,” he said.
When he returned to Delray Beach in 2016, his mother was working alongside Cassini at the Achievement Centers.
“She told me I needed to meet Mark because we share the same values,” said Shipley.
Over a cup of coffee, the two hit it off and the result is Community Greening. Since then, they have organized tree plantings at Church of God Resurrection Life Fellowship in Delray Beach and at people’s homes throughout the Southwest community.
They, along with a host of volunteers, also have planted 100 native trees at Barwick Park, more than 50 natives at Orchard View and more than 30 on Bexley Trail Community Park. Their goal is to plant trees throughout the city, the county and then the state.
“It doesn’t matter your age, race or gender, everybody loves planting a tree,” said Shipley.
The Arbor Day tree-planting event at Catherine Strong Park in Delray Beach was a milestone for Community Greening because it was made possible by a $20,000 grant from TD Bank’s Green Streets program and $6,200 from the Grass River Garden Club of Delray Beach.
To see videos of the planting, visit the Community Greening Facebook page. You can visit the new orchard in Catherine Strong Park at the southwest corner of Southwest 125 Terrace and Southwest Sixth Street in Delray Beach.
To learn more or donate, visit www.communitygreening.org. Or contact founder and CEO Mark Cassini at 305-632-6211, mcassini@communitygreening.org; or co-founder Matt Shipley at 789-2005, mshipley@communitygreening.org.

Deborah S. Hartz-Seeley is a certified master gardener who can be reached at debhartz@att.net.