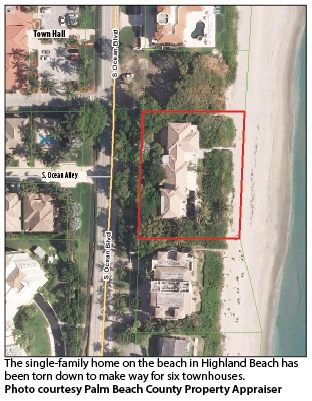 Back in April 2003, a Boca Raton Magazine article reported that the 12,056-square-foot-house sited on 1.05 acres, Casa Bella Riente, had a pre-construction price of a “whopping $15.9 million!” Features included an “oceanside VIP Suite, a second-floor master, a putting green, a huge outdoor loggia and Hawaiian fire pit for pig roasts.”
“It was a beautifully done $18 million house, but the market crumbled, and following court actions and disrepair, it ended up being torn down just a couple of weeks ago as a condition of the sale,” Cohen said.
“Our client (Riverside) bought it in November 2014, the same day the previous owner (3621 South Ocean Blvd. LLC) bought it out of foreclosure for $7.5 million and flipped it for $8.3 million and change,” Jichetti explained. Riverside then listed the property for sale for $12.5 million while working on getting all the approvals.
The property is in a mixed-use zoning area with a high-rise just across the street, and Riverside started developing the property for two buildings with a total of six townhouses, Jichetti said. “We had town approval, council approval, and all the permitting. The new owners bought the whole package from our client already entitled,” he said.
Pressman added, “This is a very high-end premier project. The new townhouses are going to sell $6.5 to $7 million apiece.”
The new owners will continue to work with Delray Beach architect Richard Jones, who drew up the plans. “Each four-story, four-bedroom townhouse will have a roof-top terrace, 5,000 square feet of air-conditioned space, private elevator and splash pool,” Jones said. “They will have a very contemporary design with an open floor plan, and the majority of the rooms will have views of the ocean. Construction is scheduled to start by the beginning of the second quarter in 2016.”
Capital Development Group is connected to contractor Joshua McAlees of North Palm Beach.
Halstatt Real Estate Partners was built upon the legacy of Barron Gift Collier, a key figure in the development of Southwest Florida.
Grafton Street Capital is a Miami- and New York-based real-estate investment firm co-founded by Sean Posner, son of the late real estate investor Steven Posner and grandson of the late corporate raider Victor Posner. Sean Posner co-founded the company with Jed Resnick, previously a senior executive at LeFrak Organization, a New York City-based real-estate development and management firm.