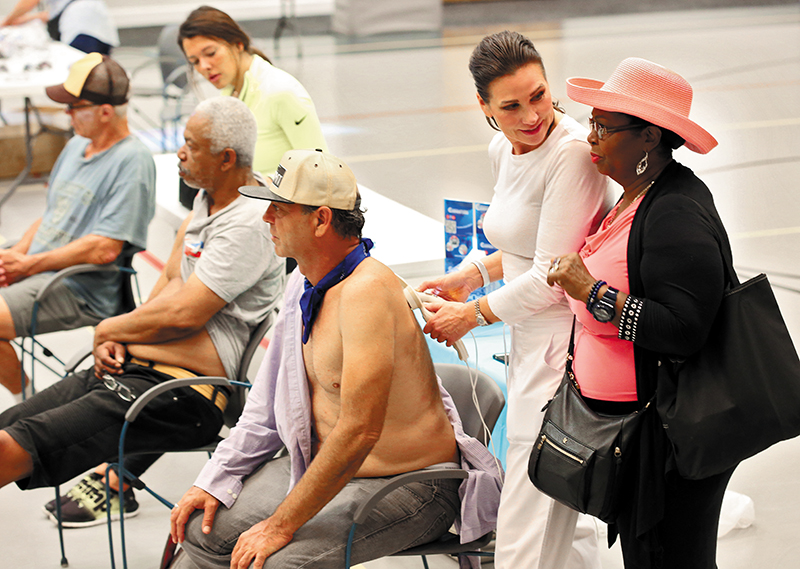 BELOW: Candace Rojas, founder and chairman of Starz Foundation, provides information to an 18-year-old man. 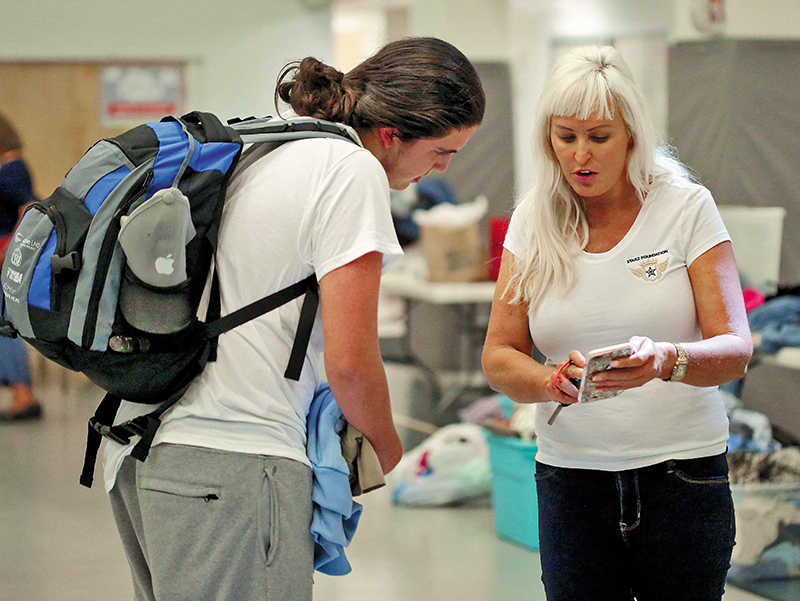 Some people think offering services to homeless people will just make it easier to be homeless, but a new program is making it easier to leave homelessness behind for good.

HOME, which stands for Homeless Outreach, Mentoring and Education, is offering a hand up — not a handout — to homeless people who are trying to get off the streets.

This isn’t just a place to get a sandwich or a hygiene kit, although HOME does those things, too. It is a place to make connections, find a place to live, get a job, access medical services and learn about options for low-cost housing.

Lesly Morales volunteers every Saturday. She said the outreach tries to fulfill basic needs, from food to laundry services to temporary shelter and more. People become homeless for many reasons, she said. Injury and illness, layoffs and bad investments, legal issues like divorce and child custody, and sometimes just bad luck can derail a person whose life seemed to be chugging along.

James Batmasian is the man behind HOME. His company, Investments Limited, is one of the largest private landowners in Boca Raton, and he’s the landlord for hundreds of businesses in dozens of strip malls.

Batmasian moved to Boca Raton from Cambridge, Mass., in 1983 and immediately started buying property — at a rate of about one a month for the first three years — in the underdeveloped coastal towns of South Palm Beach County.

Armed with a degree in economics from the University of North Carolina and an MBA and law degree from Harvard, Batmasian and his wife, Marta, built an empire, but not without scandal. He was found guilty of not paying $250,000 in taxes and spent eight months in federal prison in 2008. He can no longer practice law. Lawsuits by former employees alleging fraud and sexual harassment were dropped in April.

Earlier this year, Batmasian became embroiled in a scandal involving Boca Raton Mayor Susan Haynie. She has been charged with failing to disclose income she and her husband, Neil, received from Batmasian, whose city projects Haynie favored in several City Council votes.

While some may suggest that Batmasian is just trying to rebuild his image, he is a deeply religious man known for his generous philanthropy. He says that 15 years ago God spoke to him: “God told me to go to Dixie Manor. I was scared, but I went.”

Visiting Dixie Manor, a notorious pocket of poverty in central Boca Raton, was the impetus for PROPEL — People Reaching Out to Provide Education and Leadership — which Batmasian founded in 2004 with other Boca Raton businessmen and community leaders. Its goal was to improve educational achievement and bring leadership development to youths living in poverty. Through PROPEL, kids found jobs, went to college on scholarships and conquered poverty.

Now Batmasian has turned his attention to another struggling sector of society — homeless people. HOME is in its second year and grew from other organizations at the church. 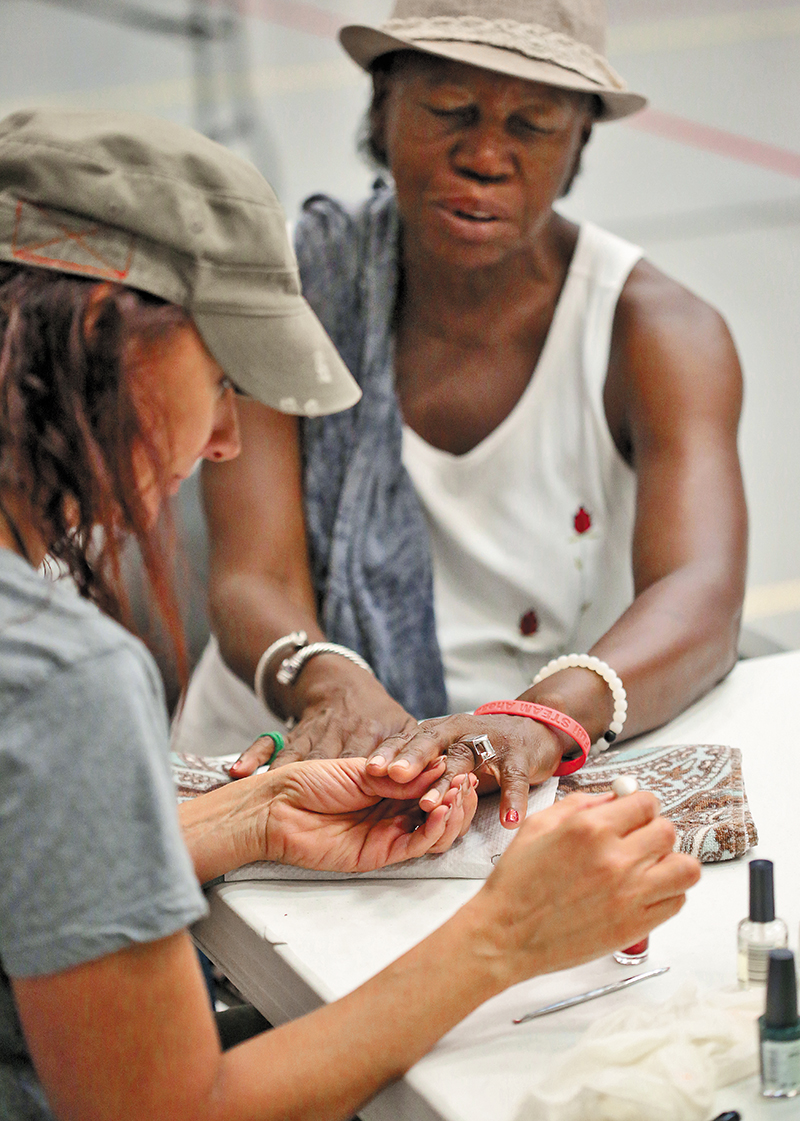 HOME volunteer Sheri Gunther, a mortgage specialist during the week, paints the nails of a woman at First United Methodist Church in Boca Raton.

Homeless people arrive at First United Methodist Church at 9 a.m. They stop at the intake desk, where they meet Sue Keith. They sign in and answer basic questions.

Keith came to Boca Raton from New Hampshire in January for another job that didn’t work out. In New England, she’d been working to get homeless veterans off the street. She met Batmasian and he immediately recognized her knowledge and people skills and recruited her. In a looseleaf notebook, Keith has names and numbers, resources and referral forms. She knows the complicated passageways through the bureaucracy and navigates them with skill.

Right away, Keith begins to assess the person. “We have to get them mentally and medically stable first,” she said. “Otherwise, we’re setting them up to fail.”

For a lot of homeless people, the first and biggest problem is not having a driver’s license or state ID. A lack of personal identification prevents people from accessing services, so Keith starts there.

With an affidavit of homeless status, a person can get a copy of his or her birth certificate and can save the processing fee. With homeless declarations, people can use the church as their address to receive mail.

The next step is getting a copy of the person’s Social Security card. Now the person can get a bus pass, health care district insurance, food stamps and apply for a job.

Before she worked with the homeless, Keith spent two decades working in mental health. 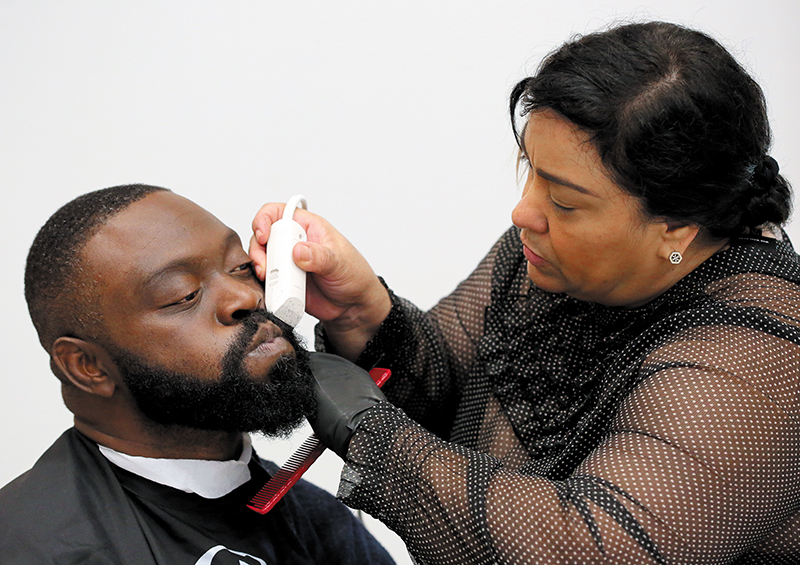 One client, who didn’t want to reveal her name, said, “If I had cancer, people would sympathize with me, but I’m bipolar. Mental illness isn’t a crime. We need to talk about it.”

A homeless mindset exists that takes some work to break down. “The hardest thing is getting them to believe they’re worth it,” Keith said.

But mental illness and addiction aren’t the only reasons people end up at HOME looking for help. Jack D’Ambrosio, 46, with neatly trimmed salt-and-pepper hair and a winning smile, is dressed in a football jersey and cargo shorts. He’s carrying a backpack and says he’s on his way to work a security job Batmasian got him. He’s also homeless.

D’Ambrosio lost his job and got behind on child support. When he started working again, the government garnished his wages. He takes home about $225 a week, not nearly enough to afford an apartment or even a room. For now, his car is home.

He doesn’t dispute owing the money or begrudge his family for wanting the court-ordered funds. “I just keep going, keep trying,” he says. The emotional support he gets from Keith and Batmasian helps.

Jan Kory was living with a few roommates and making it on her small monthly check until her roommate’s drug use spiraled out of control. “It was deplorable,” Kory said. “I was afraid. I talked to Sue and we decided I would be better off homeless than in that environment. When your options are limited you have to make tough choices.”

Kory left with the few possessions she could fit in her car and was scouring a list of low-cost housing that HOME compiles and updates each week, along with info on hot meal sites, job listings, sources of medical and dental care, drug and alcohol treatment centers, and other nonprofits offering services.

A lot of focus is placed on job readiness and putting your best foot forward. The outreach provides a place for clients to shower, get clean clothes and vouchers for the coin laundry, haircuts and manicures.

Sheri Gunther is a mortgage broker in Boca Raton, but on Saturday, she gives manicures — one of her former jobs. When she heard about the program, “I really felt compelled to go,” Gunther said. “I always feel twice as blessed when I leave. I get great joy from giving.”

Mentoring is an important component of the program, and Batmasian mentors dozens of people. Some will sit beside him in the pew at Sunday services. Everywhere he goes, Batmasian recruits people to help. “The beautiful thing is the caring partners we’ve found,” he said.

Batmasian’s pockets are full of gift cards to local businesses. Each card is good for a service — a haircut or manicure — or meal, most with a $100 limit but with no cash value. The cardholder uses the card for food or service and the business owner turns the card in with his rent, which he’s paying to Batmasian.

Only a few things exclude people from the program: an arrest warrant, being in the country illegally, active drug or alcohol use. “We never turn anyone away, but we are a substance-free program,” Batmasian said. He’d like HOME to be a pilot program for other cities. He’d like to give a significant gift of $100,000 to 20 cities to start their own HOME programs.

Lesly Morales, Batmasian’s right-hand person, keeps things running on time. She recruits volunteers, including medical professionals and people to work in the kitchen, putting together the bags of food each person leaves with. One Saturday morning, 43 people signed in for services. Keith says between 40 and 80 show up each week.

“As long as they’re trying to improve, we’re here to help them,” Morales said. “Sometimes people need a third or fourth chance, and we’re OK with that.”

HOME is having a benefit and awareness-building event, Everyone Has A Story, at 6 p.m. Oct. 23 at The Wick Theatre in Boca Raton. Tickets are $100, available at www.HOMEBoca.org/Tickets. For information about HOME or to volunteer, call 465-5311 or visit  HOMEBoca.org.