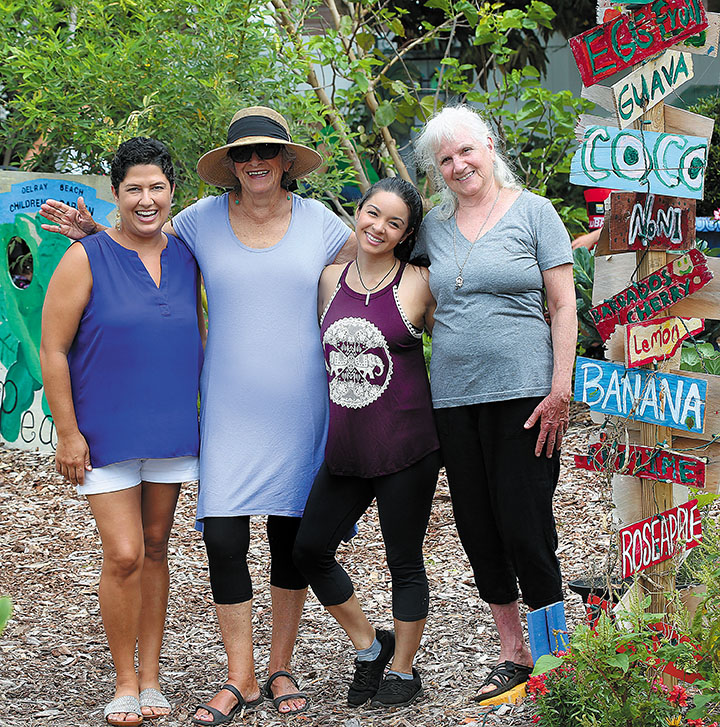 Something is growing in the Delray Beach Children’s Garden, and it’s much more than the 50 or so varieties of plants with magical names, the strawberry tree or the peanut butter fruit.

Among the clumps of fragrant bushes and knee-high collard greens are small groups of parents talking and nearby, children playing.

Often the children have never met before, but somehow in this enclosed and safe space, they are soon fast friends. The mothers are — well, if it were anywhere else, it would be called networking.

They are talking about their ideas, work, raising children, starting businesses.

Co-founders Jeannie Fernsworth and Shelly Zacks planted the ideas that became this garden.

The aptly named Fernsworth is a horticulturist. When someone asks her the name of a plant, she almost reflexively rattles off Latin names and thorough descriptions.

Their patron saint is author Richard Louv, who wrote the book Last Child in the Woods, coined the term “nature deficit disorder” and advocated “green schoolyards” to stimulate the minds of children.

Fernsworth and Zacks brainstormed with local advocates and then, about five years ago, were off and running on a $5,000 grant.

What became the Delray Beach Children’s Garden is a plot of land a block west of St. Paul’s Episcopal Church, leased to the garden by the church.

Behind blue gates, whose posts are topped by well-used garden gloves, the garden emerges gradually, revealing rare and tropical fruit trees that lend a fragrance to the air and offer some surprising taste treats.

The garden’s pond has a solar-powered fountain and is stocked with gambusia fish that keep mosquitoes to a minimum by eating the larvae.

On a recent Thursday morning, at a regular get-together, children sat in a circle around Veronica Green for a story. Green, the garden’s nature and science program assistant, has published four children’s books featuring her cartoon avatar, Veggie Vero, a vegan superhero for kids. The self-published Green makes appearances all over South Florida, and her books are available in a variety of paper and electronic formats.

Other projects include garden-to-table cooking (and eating) with Chef Adam Potash. The garden has produced a short play for Earth Day and done meatless Mondays, container gardening and worked with children in nearby schools.  The garden hosts private birthday parties and other events.

Lorel Hartley of Margate and Lacey Toro of Davie became friends at the garden. They share interest in hand-dyeing fabric, home birth and what Hartley calls “free-range children.” As the two sat on a bench, it took Hartley a minute to scan the garden and find her three kids, then she returned to chatting with Toro.

They have visited gardens closer to their homes, but found that they weren’t really designed with children in mind. The Delray Beach Children’s Garden is “worth the ride,” said Toro.

The kids make use of the garden in their own ways. One boy decided he was more comfortable sitting on top of a child-size picnic table. A little girl ran her hands through a bucket of soapy water for making bubbles. It may not look quite like education, but all these kids are learning something.

“This age, zero to 7, is essential to their development,” Zacks said.

One mother confided to Zacks that her daughter stopped being clingy after a few visits to the garden.

Not that Fernsworth and Zacks show any signs of slowing down, but they wanted to have the next generation in place to take over running the garden.

They were able to hire Christina Nicodemou, a volunteer, as a director of the garden. Nicodemou, who has experience working with nonprofit organizations, will work with a $100,000 grant the garden received this year from Impact 100 Palm Beach County, a women’s philanthropy group.

Spread over two years, the grant will pay the salary of Nicodemou and a weekend assistant, as well as help to grow the garden’s programs.

Sharing responsibility with their new director gives Fernsworth and Zacks more freedom to do what they feel they do best — brainstorm new projects.

As children played at their knees, Zacks filled Nicodemou’s arms with brochures and magazine articles about a planned mud day.

“I had gotten to a place where I was overwhelmed,” said Zacks, recalling the point just before Nicodemou came on board as manager. She sat  at the low-slung plank table under the garden’s chickee hut, surrounded by preschoolers coated in sticky papaya juice.

“My forte is being here with the children.”