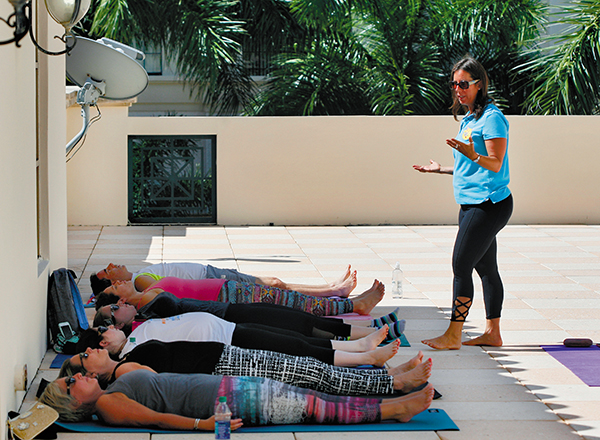 Tour leader Meridith Hootstein gets the group off to a healthy start with a short session of yoga and relaxation.

They hunted. They gathered. They tramped the streets of downtown Boca Raton in 85-degree heat. This intrepid group of six was in search of healthy food.
Savor Our Cities, a new business that leads foodie tours in Boca Raton and Delray Beach, launched a new tour during the summer focusing on fresh juices, raw foods, vegan and vegetarian fare, all locally grown or produced when possible.
Other Savor Our City tours try out restaurants and shops with a variety of food and geographic themes. 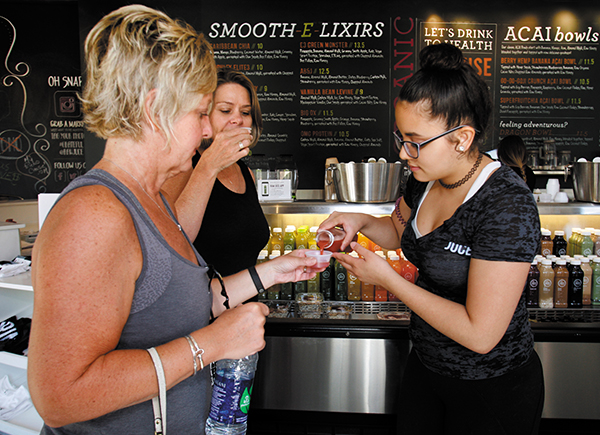 Grace Mendez at Raw Juce pours for Sarah Caines as her friend Dana Rakowski takes a sip during their tour of Boca Raton establishments. Photos by Tim Stepien/The Coastal Star

After a half-hour of yoga and relaxation on the roof of a downtown building, the group followed tour leader and yoga teacher Meridith Hootstein downstairs for their first tasting, at Raw Juce.
They tried about a dozen blended juices, blue, green, red and orange, containing combinations of ginger, carrots, acai, goji berries, chia seeds, apples, cinnamon — any fresh produce that could be put through a juicer.
Juices are considered helpful for digestion, energy and ridding the body of environmental toxins. For those not quite ready to give up caffeine, there was even cold-brewed coffee.
Crossing Federal Highway, they headed to Royal Palm Place, first to GourmetPhile, a tiny shop packed to the ceiling with wines and exotic foods. After inspecting GourmetPhile’s offerings, they adjourned to a tasting room with chic raspberry walls where they tasted salad with a locally made ginger dressing, organic white and red wines, vegan cheeses and an assortment of olives, nuts and pickled vegetables. They tried vegan dark chocolate squares for dessert.
GourmetPhile employs a raw food chef and offers a variety of milk-based cheeses, wines and other delicacies for private parties in its tasting room.
Next stop: Gary Rack’s Farmhouse Kitchen, a few doors away in Royal Palm Place. The Farmhouse Kitchen serves locally sourced and organic meats (including bison), vegetables and wines. For her vegan/organic/raw group, Hootstein chose lettuce wraps with lentil and butternut squash filling.
At this point, the group members declared themselves too full to eat another bite, but Hootstein coaxed them a few steps farther to LovJuice, which opened in Royal Palm Plaza this summer. LovJuice offers a variety of juices and energy shakes, but since the group had juiced up at the beginning of the tour, Hootstein directed the foodies to a piquant garbanzo bean salad and peanut butter bites, with shots of watermelon citron and spicy carrot juice.
Hootstein, a yoga teacher, was introduced to Denise Righetti, the CFO (chief foodie officer) of Savor Our City, by their mutual friend Emily Lilly at the Boca Raton Green Market.
Savor Our City offers a variety of themed food tours in Boca Raton and Delray Beach, including American and international tours and walking tours of restaurant-rich target areas such as Atlantic Avenue and Pineapple Grove in Delray and Royal Palm Place in downtown Boca Raton.
The vegan/vegetarian/raw tour was Righetti’s idea for including a new group of eaters.
“Denise was looking for someone to lead the vegan tour, and my name came up,” said Hootstein, who runs Blossoming Lotus Yoga.

Diet experiments don’t always work
Elena Brodskaya, of Boca Raton, had a keen interest in the tour since she is the co-founder of the South Florida Vegan Education Group.
“Meridith approached us to get our feedback for future tours,” said Brodskaya, who works at a women’s addiction treatment center and started the vegan group with her partner, Keith Berger, as a way to educate the public about the vegan lifestyle. She’s been a vegan for 10 years, Berger for 13 years.
They are frank about the fact that sometimes dietary experiments don’t work out as expected. When they recently tried eating raw foods, Berger found he was “uncomfortable and cranky” for the first few days, although that passed.
Brodskaya decided to step away from an all-raw-food diet. “I didn’t really take to it,” she said.
Nonetheless, she picked up a bag of crunchy beet chips at LovJuice and offered them around to the group as they walked back to their cars.