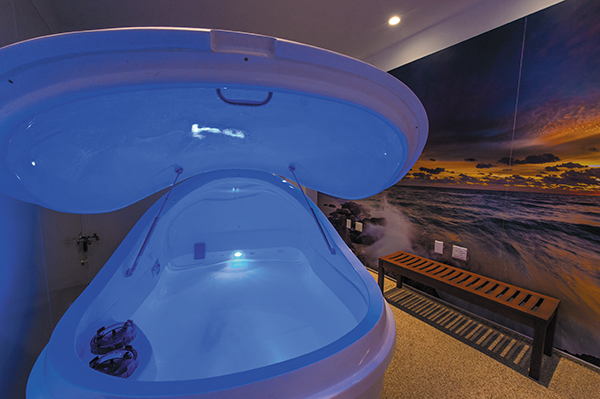 ABOVE: Each customer steps inside, closes the lid and relaxes in a flotation pod. Soaking is said to help with pain relief and enhance creativity.

For you, dear readers, I soaked myself in a closed egg-shaped pod, in water slick from 1,000 pounds of Epsom salts, in my birthday suit, in total darkness.
This experiment took place at the Float8 Wellness Lounge in Deerfield Beach.
Float8’s motto is, “No gravity. No light. No sound. Pure nothing.”
My motto is, “In space, no one can hear you scream. Get me out of here.”
Float8 opened in August, the brainchild of co-owners Destiny and Matt Beck. The couple, who live in Delray Beach, became enamored of flotation pods after visiting one near their home in the Pineapple Grove neighborhood. That place closed and the only thing to do was open a flotation lounge of their own.
The potential benefits of flotation range from pain relief to enhanced creativity.
Flotation used to be known as sensory deprivation and may be remembered as one of the many experimental therapies of the 1960s. Flotation has been used for a number of conditions, including high blood pressure, insomnia, migraines, fibromyalgia, chronic pain, PTSD, addiction and ADHD. And, of course, stress reduction.
“More people are looking for a way to unplug from our sensory overloaded society,” Destiny Beck said.
Me, I don’t want to be more than an arm’s length away from my phone and all the lovely sensory overload it provides. In the Galapagos Islands, in the monasteries of Nepal and sacred temples of India, I was always the one searching the eternal ether for a Wi-Fi signal.
Float8 has four private float rooms, a meditation studio and a lounge for decompressing before, and reorienting yourself after, the 90-minute float. You can come on your own, as several people did while I was there, or bring friends or co-workers for a bonding experience. In either case, each person floats alone in a pod. Make no mistake: This is not a hot tub club.
The walls are covered with calm-inducing photo murals and original art. On the coffee table is a book called Artwork From the Void. One of the many spiritually themed books in the Float8 library, it includes floaters’ renditions of scenes they visualized during flotation.
Inside the pod is about 10 inches of water heated to 93 degrees, the temperature of the skin’s surface, and supersaturated with 1,000 pounds of Epsom salt. Germ phobics, note that the salt discourages the growth of any unwanted life forms. In addition, the water is thoroughly filtered. Once settled into the pod, with no light, sound or gravity to distract, you can enter a meditative state, even sleep. If you’re relaxed enough, it’s possible to experience Theta waves, which occur during meditation or lucid dreaming and provide a state of conscious sleep.

Back pain alleviated
David Abellard Jr. began floating in 2011. He had been in a serious car crash the year before and suffered excruciating back pain and spasms.
“I wanted to avoid opiates because they act on your brain, and I need to be alert at all times for my work,” said Abellard, now 40, who lives in Oakland Park, a 15-minute drive to Float8. He’s a consultant to attorneys and real estate investors with a full plate of work and family responsibilities.         “I went in there with back pain at 8½ teetering on 9 out of 10 on the scale and within three seconds the pain completely disappeared. That’s why I’m such an advocate.”
Now a regular at Float8, he can expect at least three to four hours with no pain after a flotation session. “When I go every week or every two weeks, that extends to six to seven hours. The beneficial effects are compounded,” he says.
“At the end of the week, or even the middle of the week, I’m exhausted,” said Abellard. “Getting in the tank replenishes me. If you float long enough, it gets you as close to being superhuman with the abilities you’re given.”
Abellard was working for a pharmaceutical sales company when he started floating for back pain relief.
“Then, three months in, I’m starting to shatter sales records, and then I’m innovating better ways to sell.
“You feel like you’re balanced in life. You feel fulfilled. Everything is at the right level. It allows you to be creative. Your brain seems to be focused on solving problems.
“If I had a company, I would push floating for my employees, free floats for everybody,” he said.
Abellard, who gets up at 5 a.m. and sometimes pulls all-nighters for work, hopes the Becks will take his suggestion to have midnight floats, possibly in sync with phases of the moon, to enhance the floats’ effects.

Fidgety to fidget-free
“Do I need a swimsuit?” I emailed Destiny Beck.
“Nope. Birthday suit!” she responded.
That news caused a tiny jolt of surprise, but it was the 90 minutes part that bothered me most — what the heck will I do? — followed closely by the closed pod and the complete darkness. And having to turn off my cell phone.
I had once experienced sensations of a living burial during just three minutes in an MRI tube, despite being hammered by a hefty dose of Valium.
I showered and inserted silicone earplugs. A soft blue light illuminated the pod and, since I had 90 long minutes to kill, I experimented with positioning myself around the pod, turning the light off — keeping a death grip on the blue-light button. Finally, and only because I felt a little chilly, I closed the pod door.
It was comforting to know that a big, strong professional mixed martial arts fighter had the same worries.
“My first float session, I did deal with a little bit of paranoia from floating in the dark,” said James Blair, 30, of Boca Raton. “I had trouble slipping away or falling asleep. But now I really enjoy it. My muscles heal quicker and I come out in a really relaxed, euphoric state of mind.”
The Becks had been planning to direct their marketing to mixed martial arts fighters and other athletes when Blair walked through their door. He had been practicing yoga at a studio nearby. They liked each other right away and Float8 became one of Blair’s sponsors for his fight scheduled for Nov. 3 in Maine.
“You’ll need about 15 or 20 minutes to get settled,” Destiny Beck advised me.
I can’t tell you how long it took for all my fidgeting and rearranging, but after there was no other fidgeting to do, I turned off the blue light and surrendered to the dark, salty warmth. I swear to you that it seemed like no more than 60 seconds later when the blue light switched on again, signaling the end of my session. As soon as I had showered off the salty water, I turned my phone back on. Sure enough, 90 minutes had passed. Dang.
“Once you get comfortable, you don’t know where your body ends and where the water begins,” Destiny Beck said. “Even in a bed, you’re still fighting gravity. In the tank you can get completely comfortable, you can get quality rest.”
As it happened, I had entered Float8 with a passel of decisions that had to be made within days. I felt scattered and pressured.
Beck told me to notice changes in mental acuity within a day or so of my float. Sure enough, after a very good night’s sleep, I took a morning bike ride, came home clear and happy, and made all my decisions rapidly and surely. Not bad for one float.
Whatever you bring to the float — physical, mental, spiritual — will influence what you take out of the tank, said Abellard.
“I tell people not to have any expectations. Everyone gets different effects. Just go with the flow.”