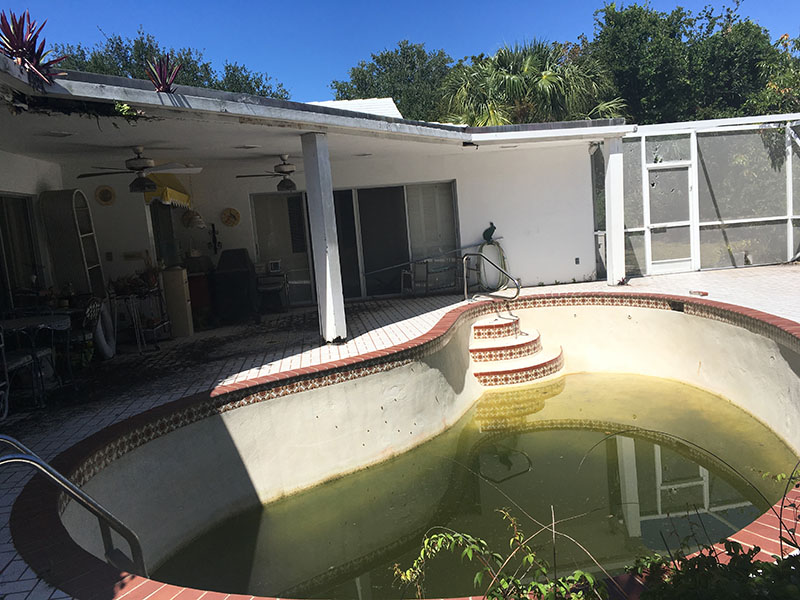 A Place Au Soleil house that rang up $1.89 million in code enforcement violations over the past 10 years is now the target of a foreclosure action by the town.
Gulf Stream officials hope to demolish the house, put in sod and a sprinkler system, and sell the parcel to someone who will turn it into a neighborhood asset.
“What we want there is to ensure that a home is built that is very attractive to Place Au Soleil,” Mayor Scott Morgan said as the Town Commission approved taking legal action Aug. 9.
Real estate broker Zac Mazur, epresenting the estate of deceased homeowner Richard Lavoie, said he had a contract to sell the property at 2775 Avenue Au Soleil for $420,000 if commissioners would agree to reduce the lien. Potential purchaser Oceana Properties planned to renovate the house and offered to pay Gulf Stream $20,000.
Lavoie’s 10 heirs, mostly cousins, apologize on his behalf, Mazur said. “There isn’t much they could do to fix what’s been done in the past, and they’re just asking for, you know, as much leniency as possible,” he said.
Trey Nazzaro, the town’s staff attorney, said an outside appraiser valued the property at $610,000 in its current “very poor” condition and at $760,000 if it had been kept in average shape.
Commissioner Donna White, who lives in Place Au Soleil, said the property had too many problems to repair.
“From what I’ve heard, the ceiling is broken — you know, down,” White said. “From my understanding of the condition of the house, I can’t see any renovation. I think that they’re going to have to take it down.”
Mazur said the planned renovations would substantially improve the property, which began receiving notices from the homeowner association in 2002 for having a dead lawn.
“There would be a new roof going on, there would be new windows. I mean, it would be renovated to, comparable to the rest of the community. I would say perhaps that would probably be better than some of the homes that could use some updating over there,” he said.
But Morgan said Oceana’s offer was far too little.
“Frankly I don’t know that you could come up with a proposal that would be acceptable,” he said. “The offer of $20,000 shows a lack of seriousness and encourages further delay in this process.”
Commissioner Joan Orthwein “wholeheartedly” supported Morgan’s position. “It’s been such a drag on this town for so long,” she said.
Lavoie died on March 4, lifting the homestead exemption on the property that had prevented Gulf Stream from foreclosing sooner. The home is the first thing people see after they pass the gatehouse to the community.
Nazzaro reviewed the history of the town’s troubles with Lavoie for commissioners, noting that the file contained 150 pages of records. The Place Au Soleil Association complained in two 2002 letters to Lavoie about his lawn and landscaping not being maintained. Lavoie testified at a special magistrate hearing in April 2005 that he had installed new sod and an irrigation system the week before, after receiving two letters from the town.
Gulf Stream sent a repeat notice of violation that August after the grass died again, and a month later a special magistrate fined Lavoie $4,000.
A December 2005 letter noted code violations including “tall grass, dead trees, a pool that was completely black and a collapsed pool screen,” Nazzaro said. After two more letters and another special magistrate hearing, Lavoie cleared the debris and erected a temporary fence around the pool in April 2006.
In July 2006 he was fined $200 for again neglecting his lawn. And in April 2009 Lavoie was fined $500 a day, again over the status of the lawn and because the temporary pool fence had collapsed. His heirs notified the town the week before the Aug. 9 commission meeting that they had erected another temporary fence, Nazzaro said.
Lavoie also owned property in Massachusetts that commissioners said they will seek to foreclose on.
“I think this is one of the most egregious examples of a resident totally ignoring code requirements not just to the detriment of the town but more importantly to the quiet enjoyment of the residents of Place Au Soleil,” the mayor said. “And not doing this for just a period of months or a year but well over a decade and a half.”