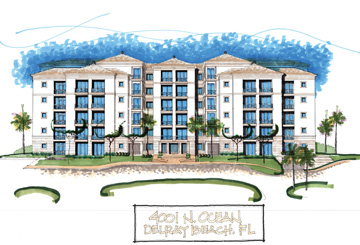 In the end, the plan to bring a taller building and more people to the oceanfront was a straightforward matter, according to the county officials who in July gave the go-ahead for a new condominium at the old Sea Horse Bath and Tennis club site.


The approval opens the way for a six-story, 34-unit complex. It will be bigger than neighbors wanted, but smaller, officials said, than it could have been.


“When you have regulations set up and developers meeting them, you really can’t change midstream,” Palm Beach County Zoning Director Jon McGillis said, after the meeting at which the plan was approved.


The developer, Kolter Property Group, hopes to get the condominium built and open for sale within the year, and proceed with plans to add four single family homes to the west side of the property, Bob Vail, vice president of Kolter said. The total number of units still will be fewer than those
permitted under current density requirements, he added.


“We would have thought that would have made some people breathe a sigh of relief,” he said.


Opponents to the project, though, say questions about its impact have only begun and go beyond the matters of aesthetics, resources, drainage, emergency services and traffic they already have raised as objections to the plan.


Robert Ganger, president of the Florida Coalition for Preservation called the project “a benchmark — because it’s gone from 23 residential units per acre, which was all the old Sea Horse had for 50 years.
The county has a policy that it shall not approve any increases in residential density in coastal high-hazard areas.”


About 150 feet of the project is set to be built east of the Coastal Construction Line, where the amount of sand on the beach can fluctuate greatly in response to weather. Sharing Ganger’s concern was Reef Rescue Director Ed Tichenor, who, immediately before the approval, sent McGillis a letter asking him to consider the environmental effects of the project.

“As we have all seen when facilities are constructed too near the water’s edge, a series of cascading events initiate which exacerbated beach erosion,” he wrote.


Tichenor added increased demand for expensive and controversial beach renourishment projects is one of the consequences of coastal construction.


“We fall into this situation where approvals are given to build very close to the ocean,” he added. “You have people believing, rightly or wrongly, that the beach used to be 200 feet wider. Maybe it was, in the brochure. People move in and become worried about being swept away. And they want sand.”


The county Department of Environmental Resources Management does not, however have the authority to stop the project, Robert Kraus, a senior site planner at the department said. But the department did add a note to the approved plan for the site saying that no public funds will be used to fortify its beach or enhance its shoreline.

“That’s the one thing we can do,” Kraus said. “Because they’re making the situation worse.”


In addition to questions of precedent and environmental impact, the size of the planned Sea Horse site project, which now lies in a county pocket considered for annexation by both Boynton Beach and Gulf Stream, could also decide what city its dwellers can claim as their home.

Residents of condominiums neighboring the site, many of whom already use “Gulf Stream” in the return addresses of their printed stationery, have petitioned the town to take the pocket of land, overwhelmingly favoring being included in that town over becoming Boynton Beach residents.


In turn, Gulf Stream officials had hoped the chance to call their town home might sway developers to build a more modest project, hinting that the existing plan, with its number of units, stories and “a lot of glass,”could be a deal-breaker to becoming part of the town.


After the approval Koch sympathized with neighbors of the project, though, adding that their prospects of becoming official Gulf Stream residents appeared dimmer.


Ganger, of the Preservation Coalition, agrees that the new condominium will be in line with its surrounding structures.


“That’s because they’re all too tall,” he said.


Ganger hopes the project will inspire towns along the coast, from Manalapan to Delray Beach, to work collaboratively.


‘”The Sea Horse project is a wake-up call — another wake-up call,” he said, after the plan was approved. “We have to come to some agreement that we live by common rules.”


He described his vision.


“We all agree that we’re not going above four stories. We all agree we’re not going to increase population density. We can then plan our infrastructure needs as a barrier island.” Those needs include water supply, waste disposal and emergency services, he said. “A master plan, if you will.”


He still hopes the plan for the Sea Horse site is open to change. Either way, he added, “We have a noble task ahead of us.”