For the first time in at least 24 years, no one from Place Au Soleil has a seat on the Gulf Stream Town Commission.
Donna White, who served since June 2013, submitted a resignation letter March 21 saying she is leaving the area. Her 5-bedroom, 3.5-bath home at 2750 Avenue Au Soleil is on the market for $2.549 million. 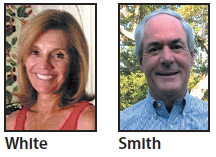 The commission appointed Thom Smith, chairman of the town’s Architectural Review and Planning Board, to the seat at its April 8 meeting.
“The Town Staff has been a pleasure to work with, always willing and informative on any issue that is presented, and I have the highest regard for the dedication and integrity of my fellow Commissioners,” White wrote in her resignation letter.
“I truly will miss the warmth and camaraderie that I have experienced in all my dealings with the town.”
Mayor Scott Morgan “regretfully” announced White’s resignation at the meeting.
“She was always someone … who had great depth of knowledge and understanding not only of our code but more importantly, the design manual and the importance of preserving what’s important in Gulf Stream,” Morgan said.
The seat goes to Smith, the mayor’s neighbor at the south end of town on State Road A1A.
“He’s a home boy. He was born and bred here. He knows the significance of Gulf Stream within the neighboring communities and what makes us a very special community,” Morgan said.
“He’s got very good judgment,” Commissioner Paul Lyons said. “As you said, talking about local knowledge, he has that.”
Smith’s appointment is the first change on the dais since 2016, when Lyons, then chairman of the ARPB, filled a vacancy created by Bob Ganger’s health-related resignation.
The mayor said he tried to recruit Malcolm Murphy, a Place Au Soleil resident and vice chair of the ARPB, but he asked not to be considered because of his business and travel plans.
White moved to Gulf Stream in 2002, was active in Place Au Soleil’s homeowners association and sat on the ARPB from 2006 to 2010. She was appointed to the ARPB after her neighbor, Muriel “Mert” Anderson, was elevated to the commission.
When Anderson resigned, she urged White to signal an interest in the job. White was the only person to do so.
The commission doesn’t have districts, “but I really like having someone from Place Au Soleil,” then-Commissioner Ganger said at the time.
Preceding Anderson on the commission was another Place Au Soleil resident, William A. Lynch, who first ran unopposed for a seat in 1998.
In other business, police said they recorded two automobile thefts, one from the Core area and one from an open garage in broad daylight in Place Au Soleil, the first auto theft for that neighborhood. Both vehicles had keys inside.
Chief Edward Allen said a group of thieves is “working the whole state. We’ve heard from Delray, Ocean Ridge, Manalapan. They just don’t know where they are what night or what day.”
Allen also said five-year veteran Officer Ramon Batista, who left the police force in July, had rejoined the department after deciding he was not ready for retirement.