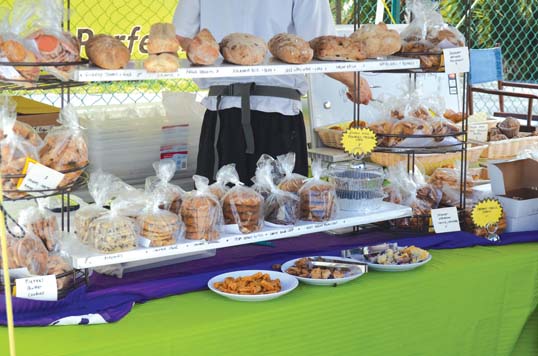 The green markets are in full swing this winter, with dozens of local offerings, both edible and not. This month we visit Delray Beach and Boynton Beach.

At Delray’s Green Market, catch up with the gal who starred in this year’s Neiman Marcus catalog. Svetlana Simon brings fresh eggs and goat milk from her 15-acre Heritage Hen Farm in Boynton to the market.

Chat her up and she’ll gladly explain that the color of eggs she sells is determined by the earlobe of the chicken — of which she has at least 30 varieties on the farm. She sells raw goat’s milk products — milk, yogurt and butter, and farmer’s cheese — all labeled for “pet consumption” because USDA regulations don’t allow the sale of raw milk for humans. But it’s OK for pets, the agency has said — and for many, OK for the pet owners, who swear by it.

Meet the Minnerly sisters — college students and makers and sellers of Inika Foods. Nicolle and Natasha Minnerly make their foods on Friday, then sell hummus, eggplant dips and other foods that are gluten-free, vegan and dairy-free. 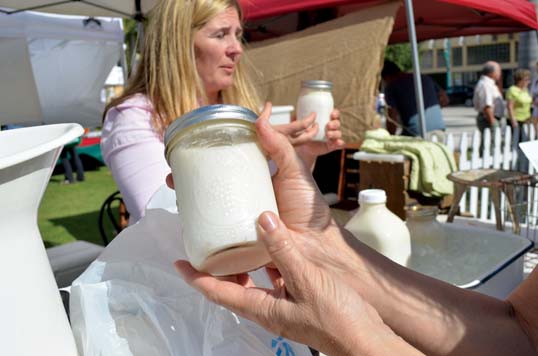 Raw foods — nonbaked crackers, breads, cookies and more, along with dried fruits and vegetables, all gluten-free, are available from the Three Anns. Based in Delray Beach, the women make foods that conform to the raw diet standard with all natural ingredients not cooked, but dried or dehydrated.

Stop by the Fun with Food booth, where Diane Ziegler-Hoffman has gluten-free, sugar-free treats, vegan and other foods available for sale. She gives classes and demos, and teaches kids to cook.

In Boynton Beach, the green market was reopened in June, in partnership with the Community Farmer’s Markets of South Florida. The 15 or so vendors have a variety of food, prepared and raw ingredients. Market manager Jerry Kugel says more vendors are signing on.

At A Touch of Spain, husband and wife team Gianni and Cristina Morandi cook up a tortilla de patatas — a Spanish omelet.

Gianni explains the Spanish fast food — served in all tapas bars and eaten as a quick snack throughout Spain — is made with eggs, potatoes and onions cooked in a special pan over the stove — different from an oven-baked frittata.

“It’s tall, that’s another difference, and the dexterity of the cook in flipping it onto the plate to keep it high is key,” he said.

It’s the most popular dish at their booth and can be made with chorizo or ham, sold by the piece or as a whole. Olive oils and olives and more also are available.

Wayne Beiderman sells nine flavored goat cheeses at his Quiet Creek Dairy booth. Cooks favor the herb roll flavored with roasted garlic, dill and chives, but the mission fig and almond flavored one is also a big seller. The cheese is made from goat milk that comes from a co-op dairy that gets its milk from Arcadia and Orlando goat farms. It’s processed in Jupiter Farms, where Beiderman gets it and blends it with flavors. Also at his booth is the popular miniature goat milk cheesecakes, which sell for $3 each or two for $5. “Everyone loves those,” he says. “People ask for them if they don’t see them and if we run out, they’re really disappointed. We’re known for them.”

A former hotel pastry chef is behind the Cookielicious booth, where cookies, artisan breads, pastries and more can be found. Jonathan Grotsky is a former pastry chef from the Boca Resort & Club and Seminole Hard Rock Casino.

He started selling his baked goods on his own about four months ago and has a following.  His raspberry oatmeal thumbprint cookies are the best seller by far, he says, but the banana and orange breads, coconut macaroons and savory breads also have fans. He takes special orders and can be contacted via cookieliciouspastryshop.com.

Boynton Beach Green Market is at the southeast corner of Boynton Beach Boulevard and Federal Highway every Saturday, from 9 a.m. to 2 p.m.

Coming next month: Boca Raton and Lake Worth