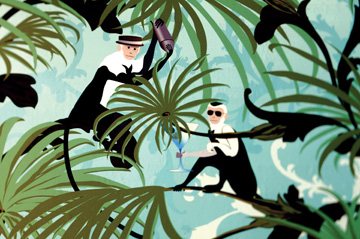 What could be more fun than a barrel of monkeys? How about a swanky club lounge that mingles chic mid-century sensibility in a modern day interpretation that incorporates a bunch of adorable monkeys on a playful, but pretty, wallpaper? 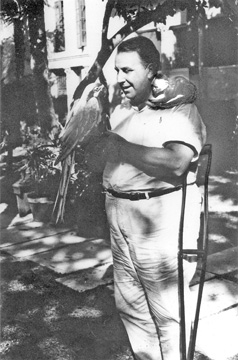 Addison Mizner and his monkey Johnnie Brown
(perched on his shoulder) visit a parrot in Palm Beach
during the 1920s. Photo courtesy of the Boca Raton
Historical Society & Museum

You can find it all at the Ritz-Carlton, Palm Beach, where the redesigned resort club lounge was unveiled earlier this year. The lounge, with alluring ocean views, is open from 7 a.m. to 10 p.m. daily to hotel guests who book rooms and suites on the club lounge floor ($429-$1,299, depending on season), and serves complimentary food and beverages — including a pitcher of top-shelf martinis. Designer Eric Villency in the Ritz-Carlton’s
club lounge, which he designed. Photos provided The Ritz-Carlton’s 2,000-square-foot resort
club lounge that has a mid-century vibe and
monkey-themed wallpaper.

“We spent a lot of time visiting the vintage shops [in West Palm Beach] — probably almost every one along U.S. 1,” Villency said when talking about working on the three-month room transformation.  “Palm Beach has such a strong historical heritage that we wanted to have elements that had real authenticity.

Small details create a personal connection and are a great way to create a unique experience.” 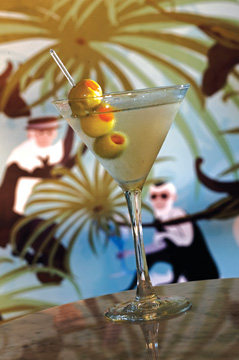 A martini sits in front of wallpaper depicting a monkey
cocktail party in the Ritz-Carlton’s resort club lounge.

Having spent a fair amount of time in Palm Beach over the years (his late grandmother had a home there), Villency said there are several instances of monkeys being utilized in design motifs throughout Palm Beach history. He wanted to draw upon that part of the local narrative.

“There is an irreverence and lighthearted humor that monkeys evoke (something we played up in our design with sunglasses, parasols and martini glasses) and that dovetailed perfectly with the feel we were trying to create,” Villency said.

He collaborated with New York City textile designer Kim Wook to create a handsome design using iconic imagery to tell a stylistic and historical narrative. Wook’s pattern, “Monkey Cocktail,” represents the botanical history and “monkey business” of Palm Beach before and after the shipwreck of the Providencia.

Stocked with coconuts, the Spanish ship was on its way from Havana to Barcelona when it ran aground near Palm Beach. Folklore attributes the shipwreck as the catalyst for the coconut palm trees, which have become synonymous with Palm Beach.

Some have said monkeys were onboard, although that has not been verified.

“Monkeys were added in (to the room design) as something poppy, recognizable and fun,” Wook said, “but also with character that could be memorable about the Ritz for people going through the club lounge.”

The monkey characters, Wook said, came from the story of Johnnie Brown, a spider monkey often seen on the shoulder of Palm Beach architect and Boca Raton developer Addison Mizner.

Historians say Mizner loved Johnnie and even hand-stitched a silk-lined sombrero, with chinstrap, for him.

Johnnie is buried in Via Mizner, the first shopping arcade on Palm Beach’s Worth Avenue. The tiny animal cemetery, which also contains the remains of Ruth Sachs’ dog Laddie, has become a popular tourist stop. Sachs and her husband, Morton, bought Mizner’s Worth Avenue villa and lived there 47 years.

Boca Raton’s Fred Eckel, a longtime partner of the late historian Donald Curl, spent years with Curl researching Mizner and his architecture. He said Mizner had many pets and more than one monkey.

“I think he picked it up (having monkeys as pets) in Guatemala when he lived there for awhile,” Eckel said. “He liked exotic pets. He was a colorful person and a good dinner guest. Of course, not everyone wanted a monkey in their house and Mizner would leave them at home then with a maid or someone.” 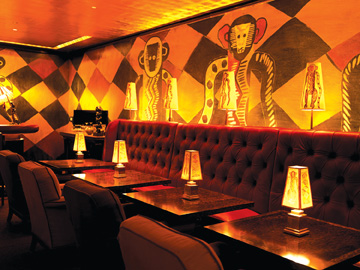 The Monkey Bar at the Boca Raton Resort & Club
pays tribute to Addison Mizner and the iconic Johnnie Brown.
The bar is closed for the summer but will re-open In November. Photo provided

As to the frequently repeated story of Mizner greeting hotel guests at the Boca Resort & Club wearing a bathrobe and carrying a monkey on his shoulder, Eckel couldn’t say for sure. “I imagine he had the monkey with him morning, noon and night, so he may have been wearing a bathrobe some of the time, but whether he wore it in the hotel, I don’t know.”

The architect and his monkey are also commemorated in an 11-foot bronze monument in Royal Palm Plaza. It shows Mizner with a design pencil in one hand and Johnnie Brown on his arm.

Of course, the Johnnie Brown moniker can be found in various places throughout the area, including Johnnie Brown’s restaurant on Atlantic Avenue in Delray Beach in the same spot Elwood’s once occupied.

Designers and artists have found monkeys appealing for a very long time. Rascally monkeys adorn the walls at Taboó on Worth Avenue, for example. And a naughty, smoking simian painted by Gainesville artist Diane Voyentzie can be found hanging above the piano in The Palm Beach Grille.

Frank Maguire of Quigley-Maguire in Pineapple Grove in Delray Beach said the interest in monkeys in design comes and goes.

“I’ll put one in a room for a little humor,” Maguire said. “It’s kind of a whimsical thing.” 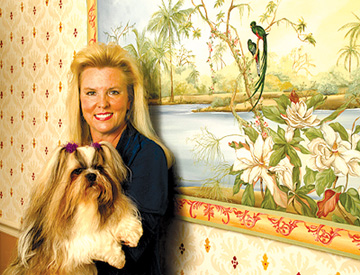 Barbara Sharp, a Sebastian muralist and fabric designer, is more smitten with them.

She markets her monkey handbags, paintings, note cards and cigar boxes at Details of Delray in Delray Beach. Barbara Sharp, who is active in the Save the  Chimps
charity (www.savethechimps.org), also creates monkey-
and chimpanzee-themed greeting cards, available at Details of Delray.

“I’m the Monkey Queen,” Sharp said. Her home is filled with monkey art. “I have monkey rugs, candlesticks, statues, pajamas and even monkey slippers.”

Many of her paintings adorn the wall of the Atlantique Café  in Delray Beach. “Their little (monkey) faces have human characteristics,” she said, and, like so many others, she finds them hard to resist. This coffee table box painted by Barbara Sharp depicts monkeys
relaxing at a bar. It is $195 at Details of Delray. Photos by Tim Stepien/The Coastal Star 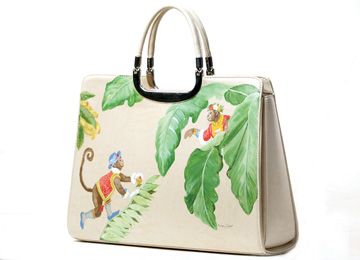 This leather purse painted with a monkey motif by
Barbara Sharp is $259 at Details of Delray.