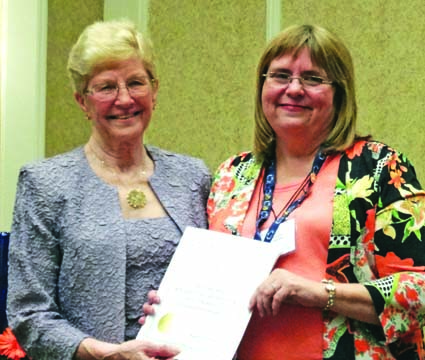 Garden Club of the Year award.

Carol Brown, president of the Boca Raton Garden Club, had her hands full when she returned from two conventions in St. Petersburg in April.
She was carrying five prestigious awards for the group, including two Garden Club of the Year certificates.
These were from the Florida Federation of Garden Clubs, made up of almost 200 clubs statewide as well as the Deep South Region of National Garden Clubs that includes the clubs in six states.
“These awards show people how hard we’ve worked. I couldn’t be prouder,” says Brown, who finishes her two-year term as president this month. The club also received an award for the Town Hall talk it presented at the Boca Raton Historical Society and Museum in October to celebrate the group’s 60th anniversary. And it won top honors for its garden therapy program offered through FAU to those suffering Alzheimer’s disease.
Brown, who has been a club member since 2009, received a leadership award from the FFGC thanks to member Marion Tieniber, who filled out a 12-page application putting her name forward.
“We have really strong momentum now,” Brown says of the 160-member club that is attracting new people. “I’m hoping it will continue.”