ABOVE: Recovered COVID-19 patient Alan Levy, right, with his wife, Lynne, and son Joshua Levy cheer from the balcony of their home in Royal Palm Yacht and Country Club during the Lag BaOmer parade on the May 12 holiday.
BELOW: Jeff Wasserman, front, and Jeff Bilfeld show support for Levy, a fellow Chabad of East Boca member. The Chabad celebrated the holiday by saluting health care heroes. The parade through Boca Raton ended with a ceremony featuring video footage of the team at Boca Regional Hospital, where Levy spent more than a month.
Photos by Tim Stepien/The Coastal Star 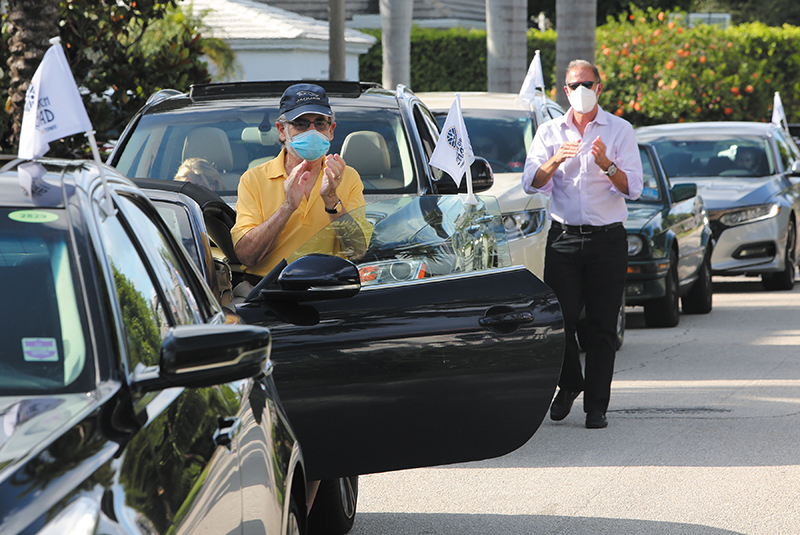 How about some good news?
People are showing up at virtual church and temple in increasing numbers. While there are few (if any) places practicing public worship in Palm Beach County, many more people are seeking out a virtual spiritual connection.
When “coronavirus” was just a whisper, Rabbi Shmuel Biston, co-director of Chabad of East Delray Beach, closed the doors of his newly opened facility on First Avenue “almost immediately.” But Biston, an Apple watch-wearing millennial, made a seamless transition to virtual worship, which was easier for groups that already had a strong online presence through Facebook or YouTube.
Others scrambled.
St. Joseph’s Episcopal in Boynton Beach amassed every tool it could find, Father Marty Zlatic says. “We started a church Facebook page, we instituted a YouTube channel for the church, and we bought a subscription to Zoom. We’re investigating the cost of installing a permanent video broadcasting system so we can more easily offer livestreaming of our services even after the quarantine is over.”
Father Brian Horgan at St. Lucy Catholic Church in Highland Beach celebrates Mass every day, but he’s leaving the streaming to others. “So many others are doing it, and we don’t want to send out something that’s not as effective,” he says. He keeps in touch with the congregation through daily emails and he answers his cellphone. “We want the parish to know they’re not forgotten.”
Still, reopening is the goal.
Paul J. Kane, rector at St. Paul’s Episcopal in Delray, says, “I can’t imagine online becoming the normal means of worship. The church is a community. Being together in prayer, fellowship and service is at the heart of who we are. So, in that sense, I don’t think online church can ever become the norm. But this pandemic has certainly demonstrated the importance of the church having a strong, accessible presence on the internet.”
The quantity and content are changing too, local clergy said, along with its audience.
Zlatic says, “Since the day the quarantine started, we started posting a worship experience of some sort every day on our social media pages to give the congregation a touch from the church. It’s been a ray of hope to our congregation, especially those who are quarantined alone.”
Rabbi Ruvi New of Chabad of East Boca Raton says he’s seen a significant spike in participation in the daily prayers he offers, with as many as 1,000 viewers showing up from around the world.
“I’m inspired and humbled by it,” he says. “We’re embracing this disruption of life as we knew it. It’s about how we utilize the opportunities and make the most of it that matters.”
Kane says daily emails to parishioners (“spreading God’s love, not the virus”) have “become a sort of lifeline in the midst of a lot of loneliness and isolation.”
For a successful reopening, everyone agrees the key is to act responsibility and safely with new protocols in place.
Bishop Gerald M. Barbarito of the Catholic Diocese of Palm Beach spoke to his flock and acknowledged that all want to reopen as soon as possible, but everyone must respect social distancing and follow policies in a “careful and thoughtful way.”
Horgan says that St. Lucy’s will follow the diocese’s lead. The church has taped off pews to enforce social distancing and removed all the books and hymnals. It is working on safe ways to offer the sign of peace, formerly a handshake or embrace, and Holy Communion.
“People need human touch,” Horgan says. “Our people are so willing to make changes, which is a tremendous blessing, but it’s been extremely hard. I can’t be a priest without people. But I’m optimistic about the future.”
Biston says, “We have to be cautious. We have a lot of seniors so even when it’s safe, we’ll keep attendance in check and take it one day at a time.”
No one is sure how places of worship will decide who comes. Reservations only? Maybe a lottery? Kane says that St. Paul’s will follow the Episcopal Diocese of Southeast Florida, which plans to take a phased approach to reopening.
“The next phase,” Kane says, “will likely involve having congregants wear PPEs, sitting at least 6 feet apart and not receiving Communion from the common cup.”
The biggest factor in determining what worship will look like six months from now will be the development of a vaccine, Biston says. But whether we’re asked to wear masks, check our temperatures at the door, provide proof of vaccination or other mandates, Biston says, “We’re humans. We adapt. We forge on.”
New says he expects a new appreciation for relationships and a lot of excitement around the communal nature of worship.
“That feeling of pooled energy, a greater sense of connection from sharing space,” are what we’re missing, he says. He expects people to be almost giddy. Right now, the feelings aren’t so positive.
But New says not to lose faith.
“My message is to relieve yourself of the burden of worry. God’s divine orchestrations cannot be understood by man. We are on the cusp of a better, brighter world,” New says.