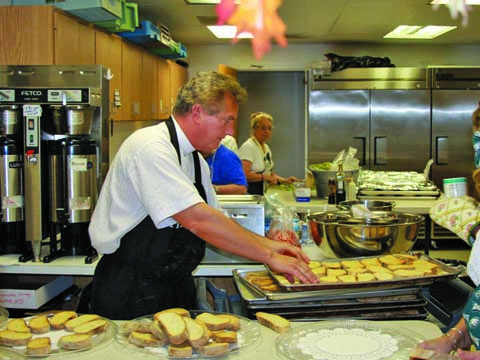 The reason why gourmet Italian food is the rage at St. Joseph’s Episcopal Church dates back 35 years to when Martin Zlatic was a Catholic seminary student studying in Rome.
A prominent chef from the Hotel Majestic had retired and volunteered to become chef at the seminary where Zlatic was assigned as kitchen liaison.
“I learned how to cook gourmet on a budget,” Zlatic recalled.
The seminary for U.S. students hosted U.S. dignitaries when they visited the Vatican. Five-course dinners were served on the seminary roof overlooking St. Peter’s Basilica in Vatican City.
Zlatic was a Catholic priest for only three years, opting instead for a business career with Motorola that brought him to Boynton Beach.
But he got married and returned to the ministry in 2001 as senior pastor at St. Joseph’s Episcopal, where the congregation quickly discovered that their Father Marty was a gourmet cook.
An auction held for his first catered five-course dinner for 12 raised a $1,000 donation for St. Joseph’s School. The winning bids for a Father Marty dinner at the annual school fundraiser increased to $5,000 in subsequent years.
Soon large sit-down dinners organized by Father Marty with assistance from others became the most successful way for St. Joseph’s to raise money for its church missions. But the parish hall seats only 125 diners.
Now a new dining hall that seats 250 diners is the centerpiece of the $5.5 million “Make Room at the Inn” fundraising campaign for improvements at St. Joseph’s.
Imagine how delicious Father Marty’s cuisine will taste when it opens.

When was the last time that you joined Christians, Jews, Muslims and Buddhists to discuss current events from a faith perspective?
The Interfaith Café encourages interfaith dialogue, awareness and understanding by uniting people of different faiths in conversation over coffee and tea.
The new monthly program, sponsored by the Interfaith Coalition of South Palm Beach County, began last year with 7 p.m. events on the third Thursday of most months. Participants compared faith traditions for courtship and marriage last month. Events have been held at Old School Square and the Arts Garage in Delray Beach plus many Boca Raton locations.
“Great things happen when you bring people of different faiths together in a neutral place for coffee and tea,” Interfaith Café co-chair Paula Winker said. “The conversations in small groups help us recognize the common values we share.”
Love, peace and justice emerge as the most common shared values in Interfaith Coalition events, which also include Earth Day fairs and interfaith picnics.
Contact Pablo del Real at 901-3467 for more information. 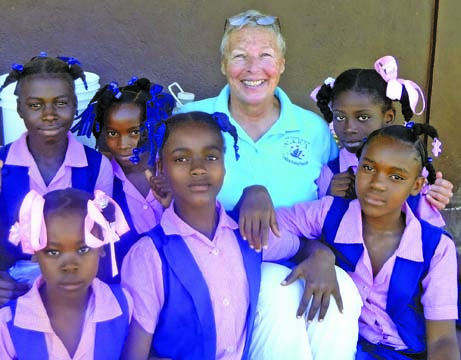 in Bondeau, Haiti. Her work has received a grant to develop and implement care standards

for medical missions to Haiti.

St. Paul’s Episcopal Church in Delray Beach has received a grant from the national Episcopal Church to develop and implement care standards for U.S.-based medical missionaries to Haiti.
The $25,000 grant supports the work of Deacon Clelia Garrity of St. Paul’s, who has worked on medical missions to Haiti since 1999.
“I am truly blessed by God to have been selected for this important mission,” Garrity said. “I look forward to working with so many of my colleagues as we strive to standardize and improve the quality of care that we offer to our brothers and sisters in Haiti.”
Garrity has organized three medical missions with volunteer U.S. doctors and nurses to Bondeau, Haiti, where St. Paul’s supports a school and parish together with St. Gregory’s Episcopal Church of Boca Raton.
Many religious faiths send medical help to Haiti. But the challenge has been in coordinating those efforts to provide the best medical care possible with limited resources.
“We in the U.S. need to step up and start communicating with each other to share our medical protocols,” Garrity said. “What, for example, is the best medication for high blood pressure in Haiti?”
The Domestic and Foreign Missionary Society of the Episcopal Church calls St. Paul’s a model for engaging Episcopalians “to serve the poor and meet Jesus in the process.”

The Rev. Tony Durante, the outreach pastor at Trinity Lutheran in Delray Beach, led seven high school students to Delray Beach’s sister city in Japan last month.
Durante, a missionary to Japan in the 1990s, spent a year teaching the Japanese language and culture to students from Atlantic and American Heritage high schools before the trip.
The students stayed in host homes in Miyazu, which has been Delray Beach’s sister city since 1977.
Many students on past visits to Miyazu have continued their Japanese language studies and pursued international careers. Sister Cities International was created by President Dwight Eisenhower in 1956 to promote international relationships.

The 3-year-old Boca Raton Rabbinical College has become so popular that students might be turned away next year.
Twelve students graduated June 18. But 30 have applied for next year’s class, and the Orthodox Jewish academy at Chabad of East Boca Raton doesn’t have enough space.
Chabad is a branch of observant Judaism that sends emissaries to Jewish communities around the world. Rabbinical students are choosing Boca Raton for their fourth year of college to develop those outreach skills.
The Chabad of East Boca Raton plans an $8 million expansion at 777 E. Palmetto Park Road to allow for more seminary students.