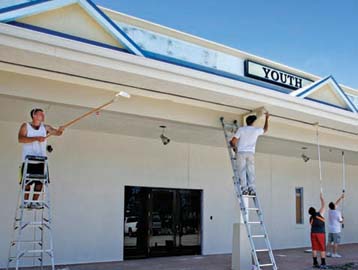 Church members paint the exterior of the Journey Church in Boynton Beach.

They are scheduled to be in the building in time for Easter. 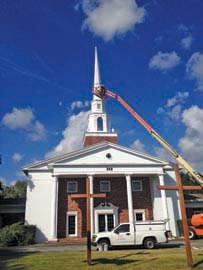 paints and waterproofs the steeple

The new Journey Church is scheduled to open for Easter after a four-month delay caused when pastors decided to raise the roof on their $1.7 million construction project.

The excitement began in 2012, when the mostly elderly members of Grace Community Church gave their $2.5 million church building in downtown Boynton Beach to the growing congregation of young families.

Church members have raised $1.5 million to renovate the church building at 715 S. Federal Highway, and the city approved the original building permits last year. The plan was to open last Christmas.

“But once I got the permits, the pastors decided they were going to raise the roof. We had to redraw the plans and then the pastors made more changes,” said Dave Van Den Berg, the good-natured general contractor. “The whole thing has been a blessing, but it has required patience.”

Architect Dave Wilde says raising the roof was a great decision. The sanctuary’s 12-foot ceiling was lifted higher by 10 feet to 22 feet for better acoustics and lighting.

“The pastors could picture that it wasn’t going to be anything special with a 12-foot ceiling,” Wilde said. “Now church services should be more lively. The raising of the roof will be worth the wait.”

City officials approved the second set of permits on Jan. 27.

“It became a long, unbelievable process. But now all the issues are behind us,” said the Rev. Scott Baugh, the senior pastor. “We’re looking for an Easter launch.”

The Journey Church also has purchased a 45,000-square-foot building at the corner of Military Trail and Lantana Road to open its second location — also on Easter.

First Presbyterian asked the 15 community charities it works with to identify families who were trying to get back on their feet. Two families recommended by Family Promise and another two identified by Adopt-a-Family were chosen.

“It’s about helping those who have less than we do,” explained Jeane Heavilin, co-chair of the Mission Outreach Committee. “That’s what Christians do.”

One family with four children and a disabled father waiting for a heart transplant needed the money just to survive. Two other families needed transportation, so First Presbyterian bought two used cars from the new Wheels from the Heart charity for $3,000 each.

The Christmas Eve outpouring reached $30,000 and money is still coming in. The remaining $10,000 will be divided among four more deserving families in the congregation.

The public is invited to the 42nd annual Fashion Show and Luncheon hosted by the Council of Catholic Women at St. Lucy Catholic Church in Highland Beach on March 4.

Women from St. Lucy will model fashions from local dress shops at 11:30 a.m. at the Boca Country Club, 17751 Boca Club Road. The event is the congregation’s largest annual fundraiser.

The wines from three California wineries (Cosentino, Clos Pegase and Girard) will be featured along with food from local restaurants at the “Raise Your Glass to End Hunger” wine tasting on April 10 to benefit CROS Ministries.

Church of the Palms is getting a kickstart with a new youth ministry team that’s attracting teenagers to the Delray Beach church.

Membership plummeted from 412 to 70 at the historic church at 1960 N. Swinton Avenue last year. A controversial pastor left in May.

Now the congregation is showing signs of a comeback after the hiring last fall of Kaylin Richards, 22, and Sadrac Blanc, 24, to build a Sunday School.

“We are blessed,” the Rev. Linda Harper told the congregation in her annual Christian Education report. “The next generation is growing in faith and fellowship with strong role models who are deeply faithful themselves.”

Not only is the Sunday School growing, but Richards and Blanc also suggested Wednesday night get-togethers that are drawing the older children, ages 12 to 18.

Kaylin invites her boyfriend, Wade Somero, to bring his guitar to the youth group. Harper delivers the pizza each week.

“I drive away saying ‘Thank you, Lord.’ I can’t believe this is happening — we have three dedicated youth leaders.”

TV journalist Jane Pauley talked about mental illness as keynote speaker for the Reflections of Hope luncheon on Feb. 27 to raise awareness about the mental health services of the Ruth and Norman Rales Jewish Family Services.

The charity offers psychiatric care and a day center for adults with long-term mental illness.

Casey Cleveland, the pastor at The Avenue Church, may have gone where no pastor has gone before when Walmart asked him to pray at the grand opening of its Neighborhood Market on Federal Highway in Delray Beach last month.

Walmart asked the Chamber of Commerce for a minister to give a blessing and the chamber recommended Cleveland, who recently spoke at the chamber’s annual prayer breakfast.

“They asked me to come and pray as part of their festivities so I did,” he said. “It was great.”

Cleveland was shocked when Walmart gave him $1,000 as a charitable contribution afterward. “This is kind of new territory for us,” he said.