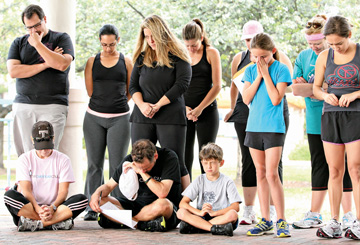 Members of the Avenue Church bow in prayer to kick off their fitness ministry, which began July 14. Tim Stepien/The Coastal Star

Bikers and runners on Ocean Boulevard generate the most activity early on a Saturday morning.
Now a Delray Beach church has launched a physical fitness ministry to be part of the action.
About 35 members of the Avenue Church walked from Veterans Park to the beach on July 14 to kick off Get Fit, a ministry to take care of their bodies.
“We believe in the mind, body, spirit approach,” senior pastor Casey Cleveland explained. “It’s important to take care of our bodies and honor God in all that we do.”
The weekly workouts include swimming, biking, running, walking and cross-fit training to build stronger bodies, stimulate alertness of mind and enhance spiritual values.
Church member Melissa Serafica brought her sons Gavin, 11, and Westyn, 2, to understand the relationship between fitness and religion.
“Our bodies are our temples,” Serafica said. “We want us to be healthy as God intended us to be.”
The Avenue Church worships on Sunday at the Delray Beach Community Center and Old School Square.
Cleveland has described his congregation as the young people who stroll Atlantic Avenue on a Friday or Saturday night. Most are in the age range of 21 to 40.
That was the age group on July 14 when fitness pastor John O’Brien led the prayer to begin the new oceanfront ministry.
O’Brien said he feared not measuring up to the “fit and attractive people” on Atlantic Avenue before he found Christ.
“God wants to set us free from that fear,” O’Brien told the congregation as the hardbody workouts began.
***
Foster parents deserve a night away from the kids on Atlantic Avenue, too.
The orphan-care ministry at the Avenue Church sponsored its first Foster Parent Night Out on July 20.
Church members entertained and fed both foster and adoptive children at the Delray Beach Community Center so the adults could enjoy dinner without them.
The event organizer, Lisa Wanamaker, said the church has recognized that support for foster and adoptive parents in Palm Beach County is a much-needed Christian service.
“Some of the parents said they hadn’t had a date night in three years,” Wanaker said. Foster parents cannot leave their foster children with a babysitter who doesn’t have proper background clearance.
“We have a small army of committed volunteers from the church,” she said. “Our goal for the evening is to love the kids and give the kids and give the parents a much needed break.”
The congregation also donates diapers, clothing and toiletries to the families.
“This is just one small way of saying thank you to the families who are caring for children who have been removed from their birth families because of abuse, abandonment or neglect,” Wanamaker said.
***
The former director of a sexual assault and domestic violence clinical services and child advocacy center has joined St. Paul’s Episcopal Church in Delray Beach as a volunteer deacon.
The ministry of a deacon is to be a servant to those in need, particularly the poor, weak, sick and lonely.
Clelia Pinza-Garrity was ordained in Nevada, where she directed the No-to-Abuse Child Advocacy Center in Las Vegas for four years. She previously was a social worker and chaplain for Hospice of Palm Beach County.
The Rev. William “Chip’’ Stokes, senior pastor at St. Paul’s, served as Pinza-Garrity’s spiritual director during her training to become a deacon.
“It was a privilege to walk with her through her journey,” Stokes said. “She will provide us with much-needed support and energy.”
The Episcopalian church doesn’t pay deacons a salary. But St. Paul’s will allow Pinza-Garrity to supplement her income by operating a private therapy and counseling service from her church office.
***
Churches often invite classical musicians to perform in their church sanctuaries. It’s a pleasant way to invite strangers to visit your church.
Unity of Delray Beach Church kicked up the tempo with its free Old Time Rock  ’n’ Roll Concert on July 15.
More than 400 people rocked as 12 local performing groups sang hits from the 1960s through the 1980s.
“I love old time rock  ’n’ roll,” said Unity publicist Brenda Robinson, who persuaded the pastor to switch from more traditional church music. “The music has to do with love, and love is what Unity is all about.”
The music dates back to when Robinson was growing up near Detroit where her friends, Joan and Alex Sliwin, achieved fame as a sister act. 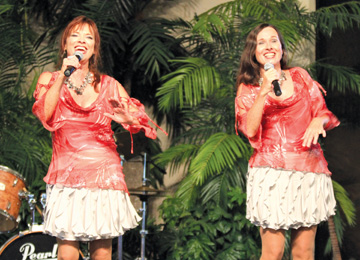 The singing sisters appeared on the Ed Sullivan Show and toured with Bob Hope to Vietnam in 1968.
The sisters — now singing again under the stage name Like Honey — reunited with Robinson to perform the first rock ’n’ roll concert at Unity in Delray three years ago.
The number of performers and the size of the audience has been growing each year since then.
But most rock ’n’ roll musicians hesitate at first when they hear they will perform in a church.
“I tell them to come on down because Unity is a nondenominational church and everyone is welcome,” Alex Sliwin Collins said.

ABOVE: Like Honey performs at Unity in Delray. Photo by  Liz Lamont Images

***
The Islamic Center of Boca Raton will use Ramadan this year to unveil its new 20,000-square-foot mosque, a light green building with a tower and green dome at 3100 NW Fifth Ave.
Muslims have invited Christians and believers of all faiths to celebrate with them over dinner there at 8:30 p.m. on Aug. 15-16.
The holy month of Ramadan includes daytime fasting and nighttime prayers. Muslims break their fast at sundown.
Spreading word about the free interfaith meal called an Iftar should not be difficult.
The Islamic Center is actively involved with the Delray Beach Interfaith Clergy Association, whose membership also belongs to Jewish, Bahai, Buddist and Hindu groups.

Tim Pallesen writes about people of faith, their congregations, causes and community events.  Email him at tcpallesen@aol.com.