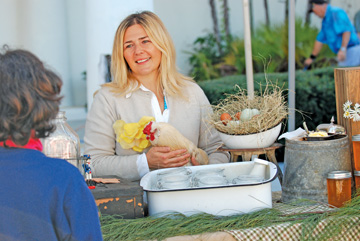 Svetlana Simon sells eggs, yogurt, cheese and milk from her Heritage Farm at the Delray Beach Green Market. BELOW: A sign at her stand describes her products and her philosophy. Photos by Jerry Lower

At the Saturday Delray Green Market, Svetlana Simon is in her white-tented booth with a caged white rooster. The Sultan rooster, a rare ancient breed with red comb and wattles, draws people who stop to talk to Svetlana about what she has to offer.
She’s providing eggs, yogurt, cheese and milk from the Heritage Hen Farm (heritagehen.com) in Boynton Beach that she owns with her husband, Marty.
“I’m a big fan of their products and a faithful customer,” says Susan Paulus, of Delray Beach, who has been buying their chicken, turkey, duck and guinea eggs since the farm opened its booth about a year ago. She uses the duck eggs to make cakes and pies because they are high in protein and have rich yolks.
“You can really tell the difference between their eggs and even the organic ones you buy at the store,” Paulus says.
That’s because the farm fosters rare breeds raised naturally.
Svetlana also works as construction supervisor for the Delray Beach Community Land Trust; Marty is a licensed contractor involved with sustainable architecture and coatings.
But together, with the help of Svetlana’s mother, Ilinka Bogdanovic, they take care of the 15-acre farm and their 300 chickens, ducks, turkeys, quail, geese and French and African guinea hens. They also have four cows, a 30-year-old Brama bull named Romeo, and a 4-week-old calf named Coco Chanel.
The animals take a lot of care. Chicks must be 7 to 8 months old before they even lay one egg. And the free-range animals are prey for natural predators. In fact, a hawk killed two Dutch Welsummer chickens and a Penedesenca hen, a Spanish breed, one recent morning.
“Losses with traditional farming are immense,” Svetlana says. “It’s a lot of work and then you can lose animals.”
But Svetlana comes by her love of the farm rightly. She was born in Serbia (then one of the republics of Yugoslavia). “It was natural to see people raising their own staples,” she says.
Her family and one set of grandparents moved to Michigan when she was 11. Her grandmother came to this country with tomato seeds, pepper seeds and yogurt she could use as culture. The seeds were the start of a backyard garden in the New World.
The garden became a family affair. “I used to hate canning season because my clothes would smell of garlic,” Svetlana says. Her mother would be in the basement making wine and vinegar and roasting peppers.
Summers, Svetlana visited her grandparents still in Yugoslavia. “My brother and I thought it would be boring to go stay with them on a farm without television. But it was a blast,” she says. In fact, at the end of one visit, they missed the plane home on purpose so they could stay longer.
When Svetlana moved to Delray Beach in 2005, she missed the family’s fresh food. “I was blessed that my parents had grown our food; it was so nourishing. But when I got to Florida, I got sick and tired of wondering where my food came from,” she says.
So she and Marty started raising chickens on leased parcels of land. But they wanted more.
In 2009, they bought their farm and moved into the little 1930s house with copper screens that’s on the property. “It’s such a pleasure raising your own food. I nourish the animals, and they nourish me. It’s beautiful,” Svetlana says.
They turned an orchid house into a place to sprout flax and sunflower seeds as well as grow wheat grass, herbs and other fresh food for the baby chicks. They have two pastures where the chickens, ducks and other birds forage, and the cows graze and eat fruit dropped from the many bearing trees on the property.
The 70-year-old fruit trees have never been sprayed with pesticides, Svetlana says. They include lychee, star fruit, coconut, passion fruit, bananas, avocados, guava, mangos, sour oranges, figs, macadamia nuts, jaboticaba and more. “I can’t remember them all right now,” Svetlana says.
She bags the duck, turkey, quail, goose and guinea hen eggs atop alfalfa hay to sell at the green market. “The customers go home with a little bit of the farm,” she says. 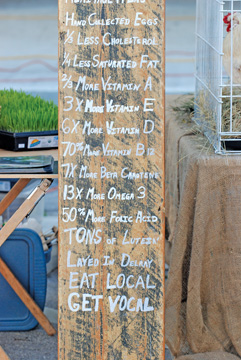 At the market, you can also buy her mother’s handiwork. “There were two solutions to any problem in my family. My father’s solution was an onion,” she says, remembering having a pungent globe held under her nose when she had a cold. “My mother’s was yogurt,” she adds.
Today, Ilinka prepares yogurt with a culture that she brought from Michigan and perfected for Florida’s heat and humidity. It took her more than a year to get it right. But it was worth it.
“Everyone loves her yogurt. It’s creamy and rich,” says Svetlana who also uses the cow’s milk to make raw butter and a cheese similar to cream cheese.
“If you work with nature and are patient with nature, you will be rewarded,” she says.