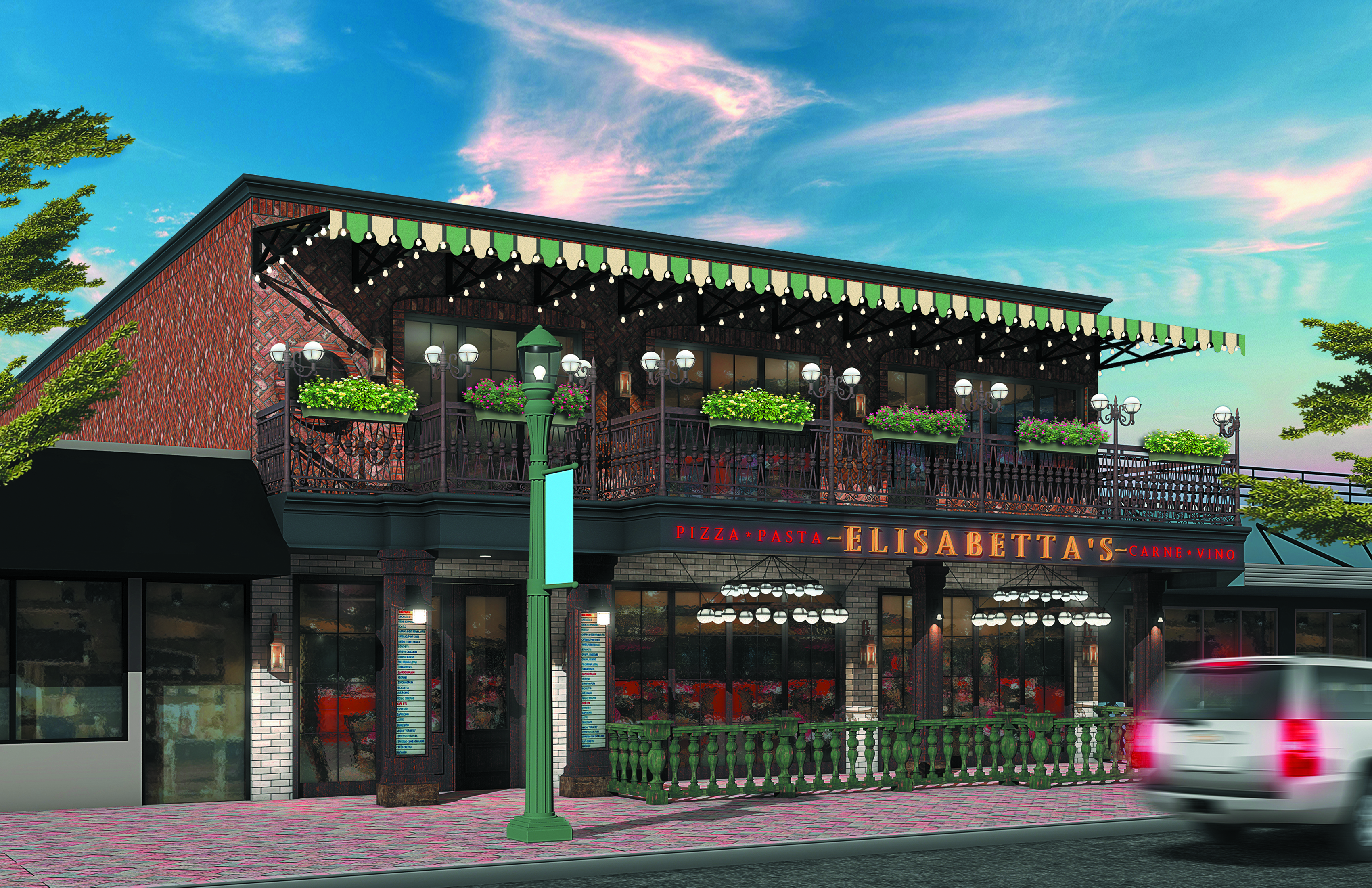 Lisabet Summa is putting her name on a restaurant at last. The longtime chef, consultant and partner of Big Time Restaurant Group has opened Elisabetta’s Ristorante, Bar and Pizzeria on Atlantic Avenue.

The Italian restaurant borrows a good deal of its menu from Louie Bossi’s — another in the BTRG group with partners Todd Herbst and Bill Watson — and takes over the two-story space that was 32 East in Delray Beach.

We spoke by phone the week before she opened.

“I’m excited and nervous, too,” Summa said. “I’ve been with them 25 years — that’s almost half my life. This is the first time my name is on a restaurant, though.”

Hard to believe it’s already been 11 years since Rocco’s took off, Summa said. “We were three or more years ahead of the trend of taquerias,” she said.

The group has moved from American regional cuisine at its original City Tavern to chef-driven Mexican at Rocco’s to taking on Southern Italian-American with Louie Bossi’s — and now Elisabetta’s, Summa said. Her part of it draws on her father’s roots in Basilicata, Italy.

“I’m 50 percent Italian on my father’s side. Growing up, going to a really Italian community in St. Louis where all father’s relatives were, was really my immersion into Italian food, or at least, what my Italian family was cooking: braciole, lasagne. I never went to a specialty grocery store to get, say, aged Parmesan. It was an Italian community with Italian restaurants, grocery stores. It was called The Hill.”

She’s close to Louie Bossi, whom she hired and mentored 15 years ago. “I call him my brother; he might as well be.”

The Delray restaurant was first announced as Louie Bossi’s, but was changed to Elisabetta’s early on. 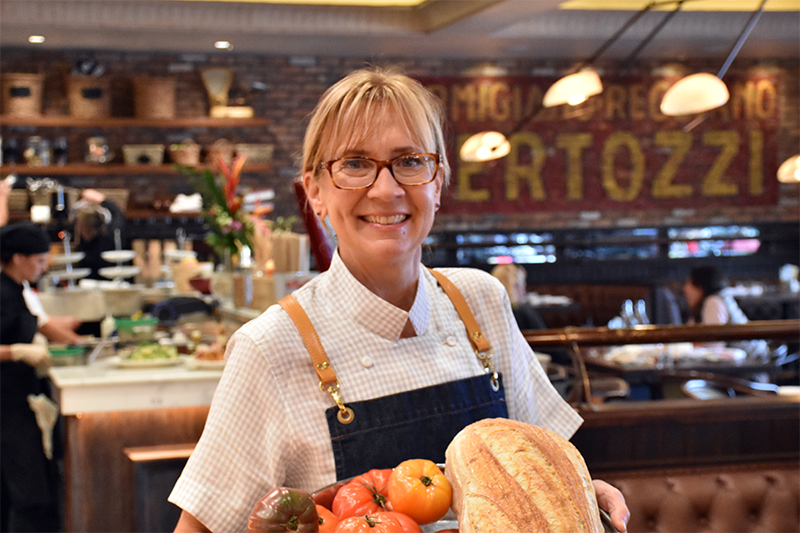 “We needed to diversify,” Summa said. “It’s such a different space being two stories. And it’s too close to Boca to have it be a Louie’s.”

His recipes, including the famous fist-sized meatballs, form the core of the menu.

“I’d say about 15 percent are new dishes,” Summa said. “We looked at things from his menu we could improve on. We have to have cannoli. Have to have meatballs — they’re his nonna’s recipe or his mom’s.

“We stayed in our lane. So much of Southern Italian is expected and known. We didn’t reinvent the wheel with Italian. We did add a more vegetable focus. We have a raw and lightly cooked crudité, pinzamonio — a veggie-centric platter of crudité. It’s a salad, cold, all veggies dressed like a salad.”

The walnut vinaigrette on the vegetable salad is from a recipe and technique shared by Judith Olney, cookbook author.
Summa incorporates as many local products as possible, but, she said, “This time of year, we’re dead in the water with local farms.”

New pastas and pizzas are on the menu, including a guanciale pizza made with house-made guanciale and stracciatella. A couple of new sandwiches also complement the menu, she said. “One is with a caponata, and one with imported tuna.”

Several dishes will come from the modern combi oven added in the rebuilt kitchen. With every restaurant the group builds, the kitchen is upgraded, something she’s proud her group can achieve.

Summa said she has always stressed and taught food costs and balance sheets in the kitchen so the staff understands the cost of the business.

“The staff is taught food is money. When I walk into a kitchen and see a piece of lettuce on the floor and point to it and ask ‘What is that?’ my cooks answer ‘Money, chef.’”

The combi oven is a modern marvel and expensive, the first one in the group’s restaurants.

“We named it Sophia, for Sophia Loren. She’s beautiful. She gets cleaned every night.

“Most (chefs) would die for it. I tell my staff if you keep your food costs down, you can buy equipment like this,” Summa said.
A trip to Italy with the chef who heads the team at Elisabetta’s, Kevin Darr, led to an orange-olive oil cake for the dessert list.

“We went to Italy and visited Dario Cecchini, the famous butcher in Chianti. We tasted this cake and I came home and asked my pastry chef to find a recipe for it,” Summa said. 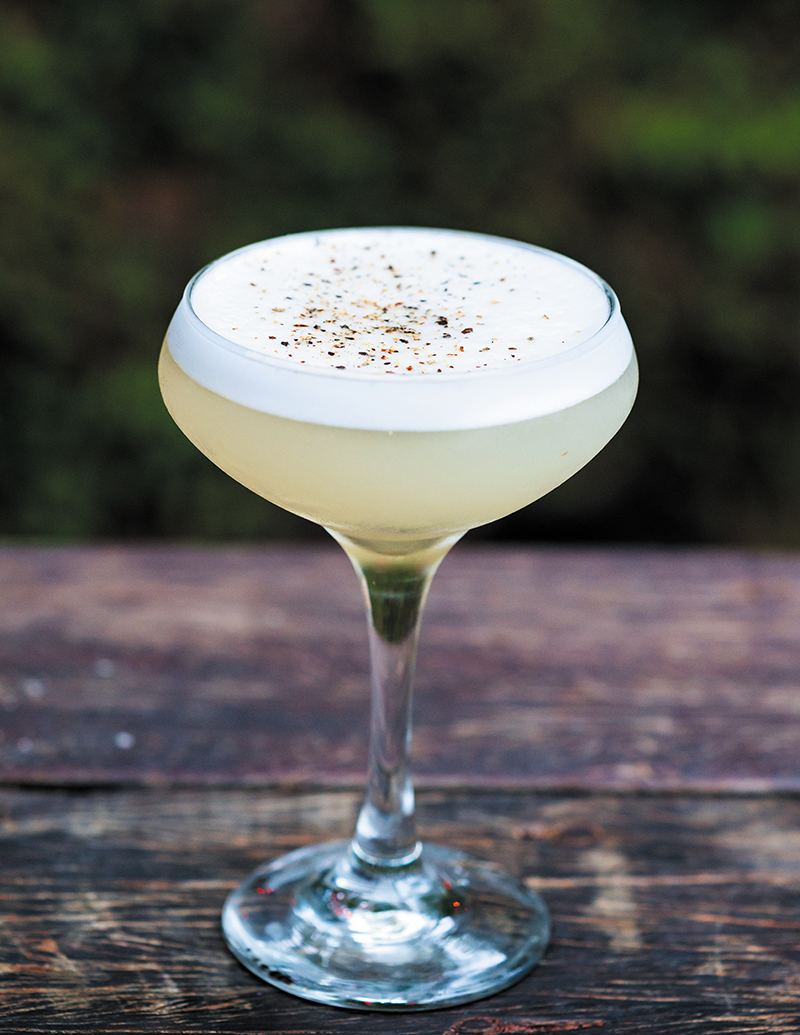 II Pepe, one of the signature drinks. The eatery serves Southern Italian-American cuisine.

Classics are coming over from Louie Bossi’s — cannoli and cheesecake.

“The recipe for Louie’s cheesecake is the best, so it’s perfect. Again, we stayed in our lane. A twist on the cannoli: It’s house-made. We make the cannoli, fry the shells, and use a pistachio paste.”

The chief dessert, however, will be the gelato. “Instead of a salumi bar in Louie’s, we’ll have a gelato bar. Friends of ours from Italy who had a shop are our own gelato consigliere,” Summa said, laughing. “Gelato is an important tradition in the south. It’s lower fat and lower sugar than American ice cream. Italians get a gelato a certain time of day like we get a latte or coffee — it’s just a tradition.”

Four flavors a day will be offered, along with special toppings created in-house.

“We soak raspberries in grappa and they’re aged three months then served over a vanilla gelato; an aged balsamic vinegar, which is traditional with strawberries in Italy; a salted marcona almond chocolate-covered brittle; and a honeycomb with a thyme-honey-butter sauce,” Summa said.

She has gone beyond the norm to keep the creamy dessert smooth. “We’ve put a lot of time and money researching gelato. We have an Italian gelato freezer; it melts differently at a different temperature than ice cream, so you can’t just adjust a regular American ice cream freezer. It’s one that keeps it from icing, and makes it always scoop-able and the same texture throughout.”

With a number of Italian restaurants already in downtown Delray, Summa is aware of the competition. She’s making this her priority, however, and anxiety isn’t helping her migraines. But she’s trying to relax, sewing new aprons for her sous chefs — her new hobby, she said.

“What we do is different. Hopefully it will meet expectations. We love Delray. We’ve been there so long. It’s a place where people congregate, hang out,” she said.

“With our time comes a bit of boldness. I think there’s always room at the top. That’s the only place we aim to be when we open.”

Boca’s Mizner Park is turning over its shops and restaurants, and the general manager of Brookfield Properties, the landlord, says a few established restaurants from Palm Beach County will open there.

Gary Rack’s, which closed this year, will be occupied by The Blue Fish, a Japanese sushi restaurant chain from Texas.

The Subculture Group, led by Dubliner and Kapow owner Rodney Mayo, expands its holdings in the plaza by adding Lost Weekend, a bar with pool and other games, art and brews. It is set to take over the former Cheese Course next to the iPic Theater. Subculture Coffee, a modern coffeehouse with branches on Clematis in West Palm Beach, Jupiter, Delray Beach and South Beach, will lease space as well.

Uncle Julio’s, a Mexican eatery that anchored the north end of the plaza, will become a bowling venue, Strike 10.

Meanwhile, Max’s Grille, an original restaurant in the plaza, is having a revamp. It’s partially closed off but still serving as it undergoes a freshening with new interior.

As the mixed-use plaza changes, other tenants will be announced for the 28-year-old site built by Tom Crocker.

The Arts Garage in downtown Delray Beach gets a new bar program, with a full permanent bar inside the venue. It’s to keep prices down yet offer guests drinks before and after performances. Beer, wines and liquors will be available. Patrons can no longer bring their own alcohol, but they are still welcome to bring their own foods, according to Arts Garage spokeswoman Stephanie Immelman.

Chef Thomas Op’t Holt at 50 Ocean in Delray Beach has come up with a fun way to highlight special menus featuring American regional cuisine. Once a month through July 2020, he’ll take diners on a Great American Road Trip with menu offerings representing famous streets in America.

First stop is Delray’s Atlantic Avenue, where he’ll honor George Morikami’s fruits and vegetable farms, the Orange Grove House history as a shipwreck refuge, and the speakeasy that was the old Arcade Tap Room. Included are historical footnotes about the areas. For this menu, foods such as a kombu-marinated hearts of palm salad, smoked swordfish, and a sour orange pie will represent Delray Beach.

Tickets for the Atlantic Avenue dinner, scheduled Aug. 7 at 6:30 p.m., are $65.27 per person (valet parking included); part of the money goes to the Delray Beach Historical Society. Get tickets at www.50ocean.com.

Get ready for Rose’s Daughter: The Italian sister restaurant to nearby Brule opens in Pineapple Grove this month. Read all about it at https://thecoastalstar.com/profiles/blogs/dining-pineapple-grove-s-newest-italian-restaurant-boasts-chef-s-family-recipes.

Delray Beach loses Sardinia Enoteca, a modern Mediterranean that opened to much fanfare two years ago. It closed mid-July.

You still have a few days to get in on Dine Out Delray through Aug. 7. More than 38 restaurants participate in the prix-fixe lunch and dinner deals. Find them at www.downtowndelraybeach.com/restaurantweek.