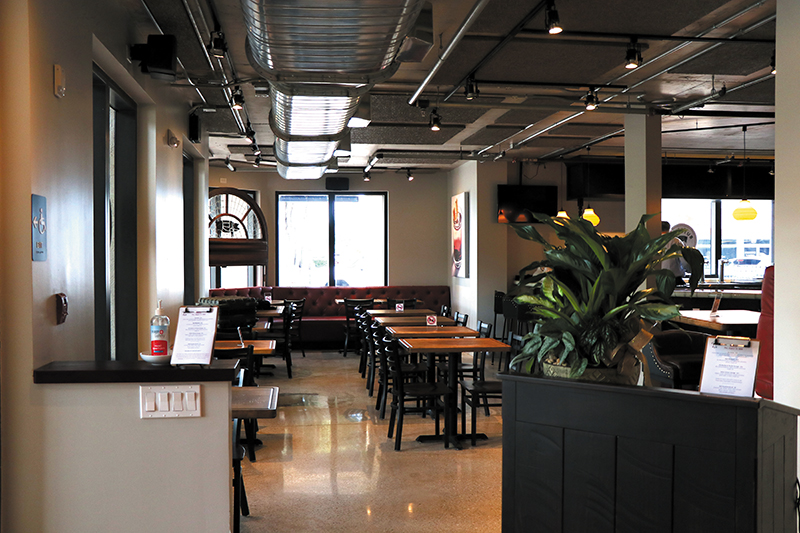 The Butcher and The Bar opened in August and offers takeout and dining inside and out. Table service wasn’t available at first, but customers could place orders at the sandwich bar. The establishment includes a retail butcher shop. Photos provided by Jupiter Compass Digital Marketing Agency

Partners in The Butcher and The Bar worked through the COVID-19 shutdown and have managed to open — at least partially — their new eat-in butcher shop in Boynton Beach.

Eric Anderson, business partner, says the old-school, retail butcher shop and sandwich counter are open for takeout, and diners can sit inside or out and eat, but as of late August there was no table service.

“We were kind of supposed to open in April, but then contractors couldn’t send as many people at once to a job so there was a delay. We opened early August,” he said.

“Once Phase 2 is in place... we’ll be able to open the bar. We’ll start serving small plates there.”

In late August, the partners were still waiting for their liquor license to be approved.

From the counter, they serve breakfast biscuits from 9 a.m. until they’re sold out, and offer a variety of sandwiches and other prepared foods at lunch. The retail butcher case is open all day.

First and foremost, TBTB is a whole-animal butcher shop, Anderson said. “We bring in whole cows, pigs, chickens, and butcher them on site.” Fresh meats and poultry, most sourced in Florida, are cut to order in the retail side.

Jason Brown, a junior partner, is the butcher. He is largely self-taught but has taken classes in butchering from noted chefs. He and others from the shop visited several farms in Florida to see animal operations before choosing their meats. 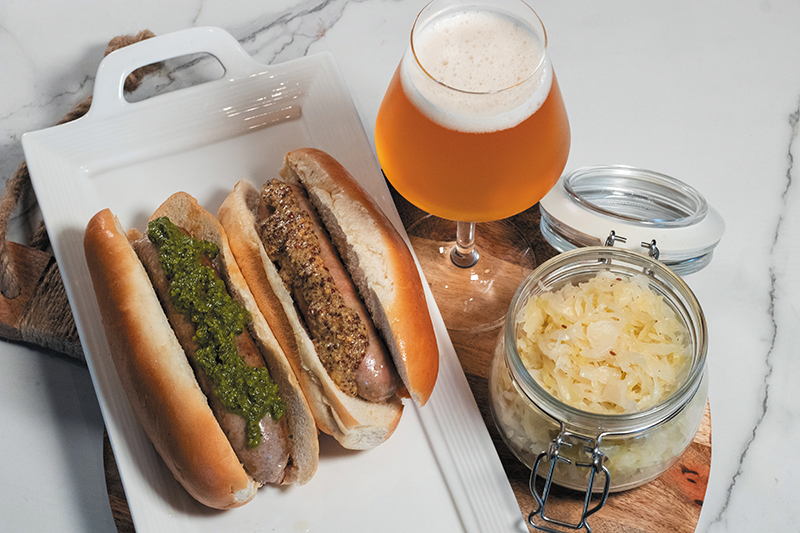 Pork and chicken sausages and slaw are among the menu items. Everything is made from scratch. Photos provided by Jupiter Compass Digital Marketing Agency

“We get our hogs from HertaBerkSchwein Farms in Groveland, and cows from Watkins High Pasture Ranch, and Fort McCoy near Zolfo Springs,” Anderson said. For now, Bell and Evans chickens from Pennsylvania are on the menu until they find a quality poultry producer in Florida, he said.

All ground and smoked meats from the kitchen are house-made, including pork and chicken sausages, smoked bacon, tasso ham, porchetta, chicken meatballs and kielbasa.

“Everything is from scratch,” Anderson said. “All our condiments — our mayonnaise, ketchup, bone broth — we make everything here.” They have a “pickle program” as well.

Daniel Ramos, of the critically acclaimed Red Splendor Bone Broth, is a chef/partner, overseeing the menu, which changes daily.
Anderson said despite the name and concept, the shop has vegetarian and even vegan offerings.

“We had a party of three vegans who came in, and Chef Dan made them a whole vegan meal. There’s a joke there,” he laughed.

Hours for the shop are 9 a.m. to 6 p.m. Monday through Saturday, but once Phase 2 is initiated and the bar is open, hours will change.

Feeding South Florida, the food bank that partners with other nonprofits throughout the county, has expanded with a 5,000-square-foot kitchen and food prep area that can now handle the production of 10,000 hot meals weekly. The Boynton Beach facility on Park Ridge Boulevard opened in July.

“The need has doubled because of COVID,” Vatske said. She listed as recipients homebound older adults, school kids out on summer break, and numerous nonprofits that help food-insecure populations across the county.

Add to that people who are newly unemployed in the food and hospitality business, who find themselves needing basic help, and a potentially threatening hurricane season.

The new facility has a pantry up front. Supplemental Nutrition Assistance Program recipients can come in and get cleaning supplies, canned goods and dairy perishables as part of the program. The facility acts as a drive-through distribution center as well, providing boxes of SNAP benefit food weekly.

In the main production area, a gleaming new commercial kitchen line is in place.

“This is the culinary training kitchen,” Vatske said. “We’re going to have 10 to 12 people at a time, for 16 weeks, training here.” 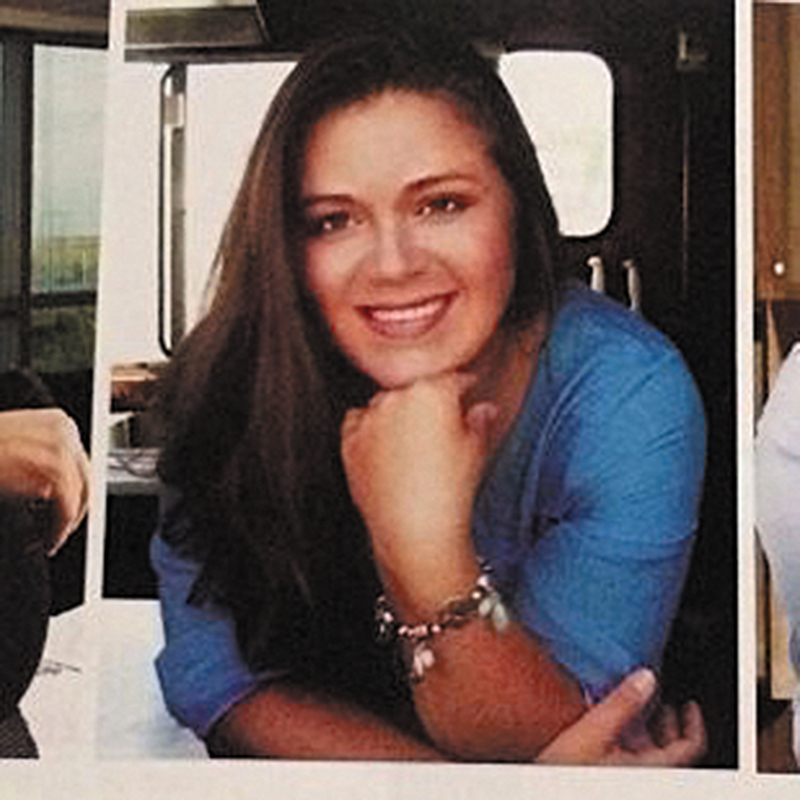 Feeding South Florida chefs, led by Chrissy Benoit, will team with volunteer guest chefs from the community to train people to work in the culinary field, both kitchen and front-of-house positions.

The goal is for graduates to find work in commercial restaurants. The program is open to anyone with at least a GED who wants to get into the culinary field or improve his or her career, she said.

The plan is for classes to be sponsored, Vatske said, with the goal that they are free for the trainees.

For now, the teaching kitchen is idle because of COVID-19. “We are hopeful by October we’ll have teaching and training,” Vatske said.

The organization also will add commercial events, such as catering large affairs.

“We will have a revenue-generating component. The money earned will be reinvested into our program,” she said.

In the past, Feeding South Florida relied on vendors to help produce its meals; FSF now will become a vendor to others, supplying hot meals for recipients of other programs.

For special events and catering work, the agency will hire from its grad pool.

“We’ll also have an incubator program for food products,” Vatske said. Entrepreneurs can learn to make and market their own products in a commercial environment.

Workers on the production side are cooking and packing meals for distribution. Soups are prepared in one of the giant tilt skillets — cream of celery was the choice on a recent day. The menu rotates through a four-week plan.

Meals are cooked rapid-fire in the new combi ovens. These are high-volume ovens that perform multiple functions such as baking, steaming, poaching and roasting.

“These are amazing,” Vatske said. “They are state-of-the-art,” allowing them to turn out hundreds of complete meals much faster.

Volunteers are used to pack and seal the food trays.

A cold storage area is being added; for now, it shares space with the major distribution area. There’s also a small laundry room where kitchen linens and uniforms are laundered, keeping everything in house.

The agency also works with FEMA and Florida’s CERT (the emergency response team coordinators), as well as community groups to provide meals for emergency workers and people in shelters during disaster relief efforts.

Hurricane Harvey, a Category 4 storm that devastated parts of Texas and Louisiana in 2017, wiping out resources for food, spurred a new program for Florida, Vatske said.

The state funds FSF and other organizations, which have high-production meal-distribution plans ready whenever a storm approaches.

Other funding comes from federal agencies, as well as a number of local partners such as Publix, the Quantum Foundation and other private groups.

Volunteers and donations are still needed from the community, she said, more than ever to help people outside the government programs.

Vatske said FSF is grateful for all donations. “Absolutely. We have general programs and supplies to fund.”
For information about the programs or volunteer opportunities, go to feedingsouthflorida.org.

Chef James Strine has taken the helm at Taru, the new moniker for the restaurant at the Sundy House. 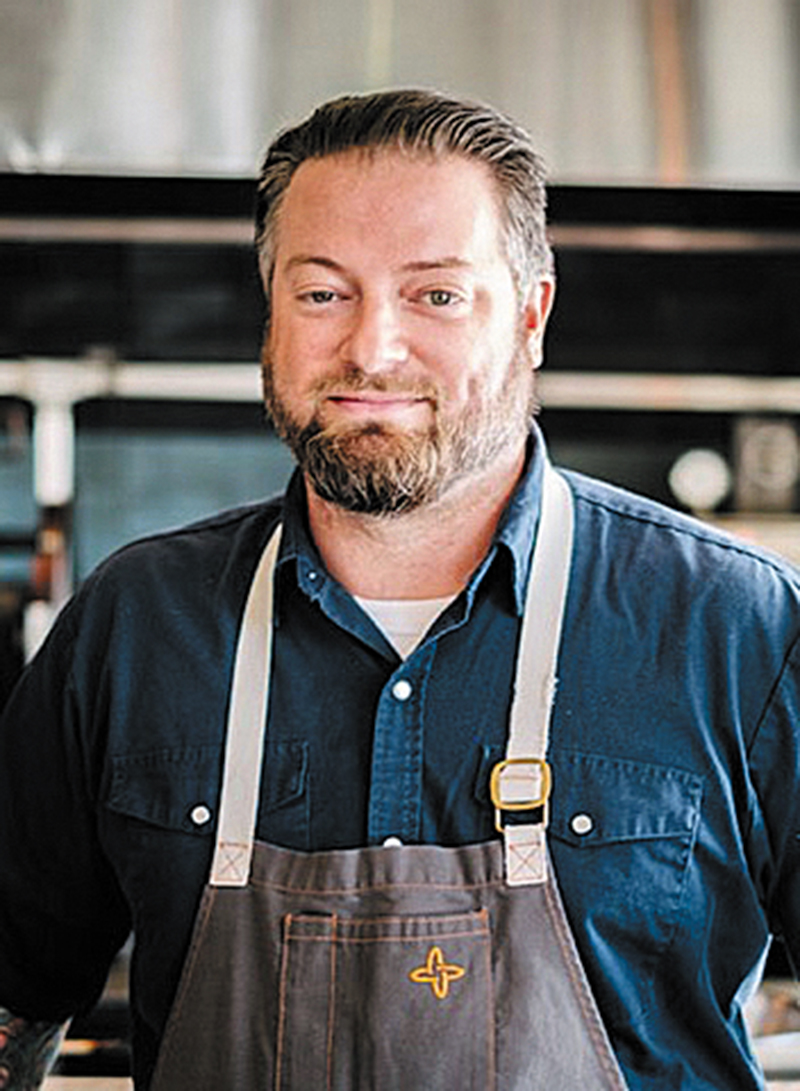 It is billed as “New Florida Cuisine,” and puts a twist on Florida influences from the Caribbean (jerk ribs with tamarind barbecue sauce); Cuba’s croquettes (turkey and stuffing croquettes with cranberry mayo), or a Florida bouillabaisse (local fish, clams, shrimp, grits). He also dips into Asian influences, with Dynamite rice (furikake, crab, pork belly) and rice noodles and clams, with wine, garlic, bone marrow and Thai basil. Taru also gives a nod to a hot trend by offering poutine (fries covered with burrata and foie gravy).

Though Strine is a master at meats — he’s noted for charcuterie and his butchering skills — he knows vegetarian plates as well (cauliflower steak and waffles).

Strine comes from a string of noteworthy kitchens, including Cafe Boulud, Buccan and Grato, as well as his most recent gig at The Trophy Room in Wellington.

The restaurant is still open for its acclaimed Sunday brunch in the garden — a romantic setting on any occasion.
Taru at the Sundy House, 106 S. Swinton Ave., Delray Beach. Phone 561-272-5678; www.sundyhouse.com. Open for dinner Monday-Saturday; brunch Saturday (a la carte) and Sunday (prix fixe buffet). 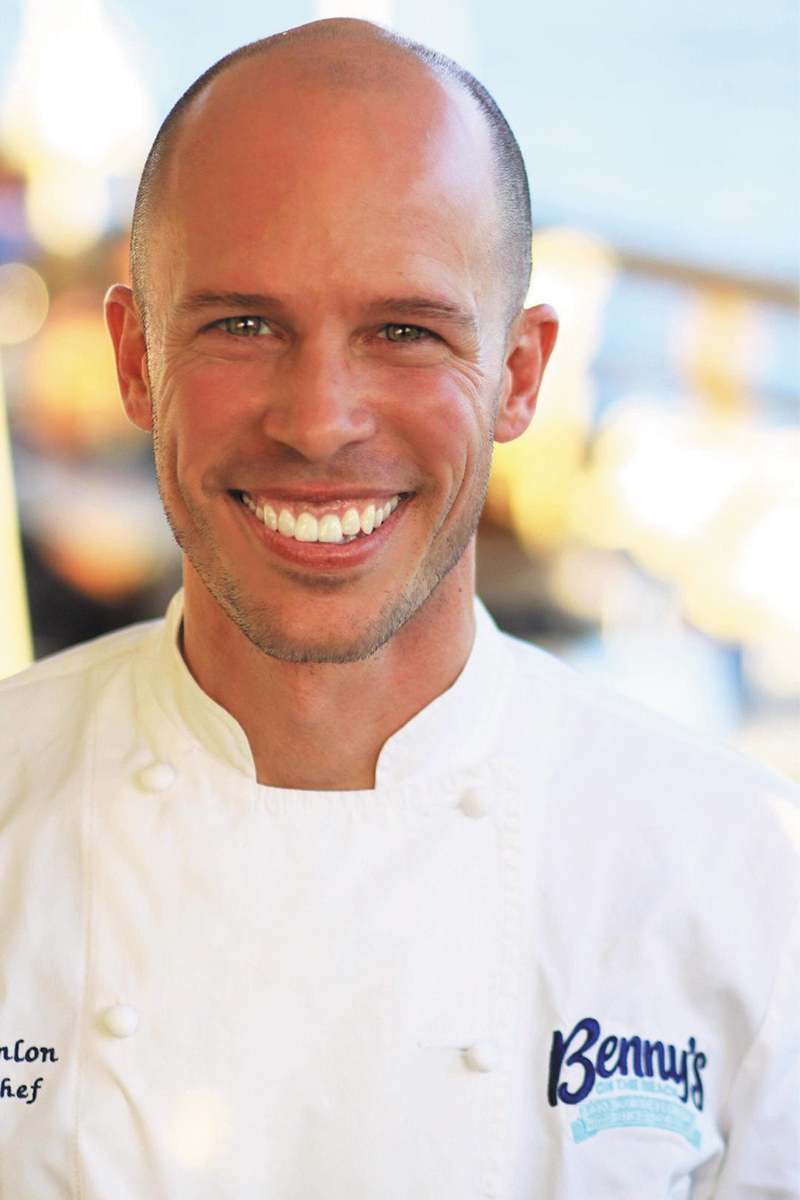 In brief … Viva La Playa, a new Latin restaurant, takes over the former Mulligan’s space at the Lake Worth Casino beachfront plaza. Chef Jeremy Hanlon of Benny’s on the Beach, the sister restaurant, brings flavors from South America through Latin America to the menu. The eatery planned a September opening. ...

Plans are still on hold for the season’s green markets, but Delray’s GreenMarket is celebrating its 25th year anyway — with a new cookbook. Residents are asked to send in their favorite recipes to be included in the Community Cookbook Tastes of the Season. To participate or for more information, email Lori Nolan at nolan@mydelraybeach.com. The Vol. 2 cookbook is still available for $12 by calling the Community Redevelopment Agency at 561-276-8640.