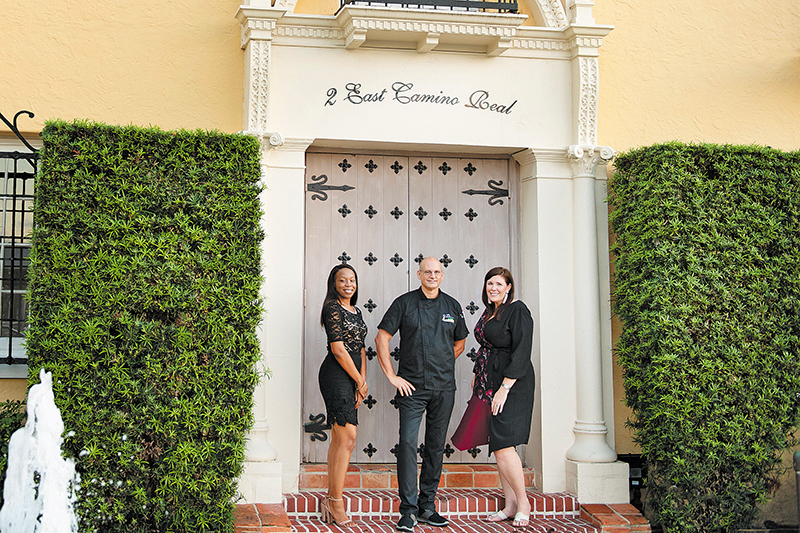 Once again, the Junior League of Boca Raton kicks off its year with the annual food and wine extravaganza Flavors 2020, on Feb. 6 at The Addison.

The 11th year of the dine-around format has 30 South Florida restaurants serving up tasting plates for guests. They get to vote on their favorites this year, and a people’s choice will be awarded.

The theme is “Fall in Love with JLBR” — a tie-in to Valentine’s Day.

Flavors committee Chairwoman Richalyn Miller of JLBR worked with the volunteers who stage the fete. Patrick Duffy, The Addison chef and honorary executive chef of the event, serves as coordinator for food and beverage.

Along with the food stations, unlimited wine, craft beer and spirits are available. A raffle, a number of pop-up shops and a live auction are included.

A DJ and live entertainment, including Fred Astaire dancers, will perform.

VIP ticket holders will have their own lounge and get early admission at 6 p.m. and swag bags.

It’s typically a sold-out event with only 600 tickets available.

Boca Bacchanal is ready to rock the town March 6 and 7. Several events lead up to Boca’s largest wine and food festival, including this month’s Bubbles and Burgers.

Feb. 20 at the Boca Beach Club, Bubbles and Burgers is hosted by the Alina residences. It’s an informal bash with a wide variety of specialty burgers and a selection of Champagne, sparkling and still wines to taste.

Vintner dinners are set for March 6 in private residences and historic sites around Boca Raton. Limited tickets to the dinners are $350.

Six chefs or pairs of chefs have been matched with local resident hosts and vineyard representatives. A multicourse dinner prepared by visiting chefs is the highlight.

The Grand Tasting, set for March 7, is usually a sell-out. The dine-around at the Boca Raton Resort and Club features top wineries pouring samples to match foods prepared by local and visiting chefs.

More than 100 live and silent auction items will be up for bid, including travel packages, wine, perfume, electronics, art works, and experience packages.

To learn more about any of the events or to buy tickets, go to www.bocabacchanal.com.

Prime Catch in Boynton Beach is opening its new dock-and-dine Prime Island bar with events Feb. 7-9. The restaurant has already redecorated the dining room, which now offers water views from every table.

With the new docks, Prime Catch will accommodate more boats. The bar is situated right on the docks. A special Bar Bites menu is in place as well.

For a look, get to one of these events:

Lionfish, a sustainable seafood restaurant, is a San Diego import coming to Delray Beach, opening this spring on Atlantic Avenue.
The James Beard Foundation twice recognized the restaurant as a Smart Catch Leader for its sustainable “sea to table” menu.

It will go into the former Luigi’s Coal Fired Pizza space next to Johnny Brown’s.

Lionfish — the namesake fish — is the invasive species decimating reefs locally, as it has nearly no predators. The meat on it is sweet and marketable, but handling the fish’s poison-laced spines is a drawback to mass harvest.

The fish isn’t on the menu at the San Diego location, but with the restaurant’s commitment to locally sourced seafood, there’s a good chance it will appear on the South Florida version.

Sushi and entrees featuring sustainables such as snapper, octopus, shrimp, lobster and mussels are on the San Diego menu and expected to be on Delray’s.

Chef Jose “JoJo” Ruiz of the San Diego restaurant will oversee the startup of this second location. A March opening is expected.
The group behind the restaurant, Clique Hospitality, operates a number of “boutique” restaurants in Las Vegas and California and presents celebrity events featuring foods.

Lionfish will be at 307 E. Atlantic Ave., Delray Beach.

The Butcher & The Bar, coming to 510 Ocean Ave. in Boynton Beach, aims to be a full-service butcher shop, restaurant and old-school bar playing vinyl records. Chef Daniel Ramos of Red Splendor Sausage, and former chef at the Sundy House in Delray Beach, is behind it. No opening date is yet set. Watch the progress at www.butcherandbar.com.

We reported last month that Jewell Bistro would be moving from Lake Worth Beach into the Ambassador Hotel in Palm Beach. After press time, we learned owner Dak Kerprich could not reach an agreement with the owners of the hotel and the deal is off. Jewell remains open in Lake Worth. No word on what restaurant will go into the former Sergio’s at the Ambassador.

The Boca Raton City Council gave a nod to Restaurant Row, an area in front of the new complex approved at Butts Road and Town Center Road. Four 5,000-square-foot spaces are available, plus patios. Already there’s a call out for a bakery, sushi and “high-end Italian” from Prakas & Co., broker for the complex.

The South Florida Garlic Fest, now held in John Prince Park in Lake Worth Beach, is celebrating its 21st anniversary Feb. 8-9. Among the new offerings this year are a garlic-avocado grilled cheese, sensory play zones for people on the spectrum and others; and “luxury potties” available to $5 all-day potty-pass holders. Tri-Rail offers a $5 “ride all day” weekend fare. Go to www.garlicfestfl.com to get all the info and tickets.

Jeremy Bearman and spouse Cindy Bearman, owners of Oceano Kitchen in Lantana, are opening the doors at their new seafood restaurant High Dive, in downtown West Palm Beach. The 5,000-square-foot space in Rosemary Square, formerly B.B. King’s Restaurant and Blues, will focus on small plates of globally inspired seafood. The creative pastry and dessert menu was created by Cindy, a veteran of noted restaurants across the country. Jessie Bell will lead the beverage program. https://www.loc8nearme.com/florida/lantana/oceano-kitchen/3401308/

Another South County name is also opening in Rosemary Square. Andrew Weil will open a second True Food Kitchen in the old Restoration Hardware space sometime this year. Its sister location is in Boca Raton.