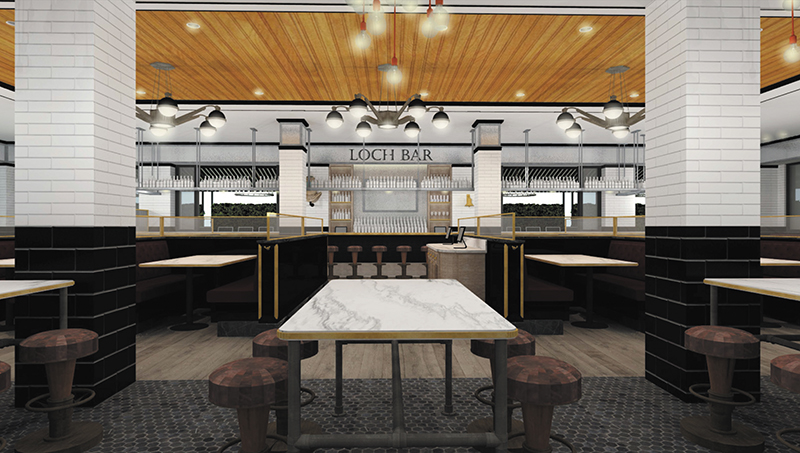 The Loch Bar should be open in mid-November in Boca Raton. Photos provided

The Smith brothers, Alex and Eric, who brought to town Ouzo Bay in Boca’s Plaza Real, are at it again with their new Loch Bar.

Under their Atlas Restaurant Group umbrella, they are set to open Loch Bar this month in Mizner Park in the old Gigi’s spot. It’s a seafood concept with large raw bar and nightly entertainment, and the first of several planned outside of Baltimore in their home state.

Eric Smith spoke about choosing Boca Raton for the bar and the company’s plans for other concepts in South Florida.

“We’re very familiar with the area,” he said. “Our family had a house in South Florida in the Boynton Beach area for 25 years, and as children we grew up spending a lot of time vacationing down there.”

When it came time for the duo to expand, they looked to places they knew. “We used to go to Mizner Park all the time,” Eric said. “We knew it was a thriving market.”

A number of closures there have not scared them off.

“We saw there was a dip in the market right now and it’s a great opportunity to get involved so that when it comes back up, we’re right in the swing of things.

“We think Mizner’s going through a renaissance in a very positive way. A lot of the older retailers are working their way out” with “new, fresh tenants” taking their places, Eric Smith said.

“We think we’re the start of the F & B (food and beverage) change in Mizner Park.”

The restaurant will be an upscale seafood bar with a large raw bar and a whiskey-forward bar program.

“We’ll start with 350 whiskeys,” Smith said. Because they’re produced like wine, with limited releases after aging, it takes several years to accumulate a 500-bottle list — their goal, he said.

A majority of the foods on the menu will be tweaked to include local products. “We mix in a handful of our traditional Maryland seafood dishes — i.e. crab cakes, oyster po’ boy sandwiches — stuff like that. But the majority of the raw products will be local,” Eric said.

Red snapper, grouper, mahi and other local fishes will be featured in the dishes already on the Baltimore menu.

A stone crab night on Mondays with a fixed-price meal, $79 to include appetizer and dessert, will replace the one that fans of Truluck’s came out for before its Mizner location closed this year, he said.

The audience skews older than at the company’s Baltimore outlets — they have eight already successful concepts in and around Baltimore harbor.

Smith said it’s changing down here, however, with all the new development in residential space as well as hotel and retail real estate going in.

The publicist for the group, Kristen Skladd of the Gab Group, said new, younger professionals are attracted by the modern rental properties popping up in east and central Boca in particular. They are coming up from Miami and from out of state from the Northeast and California, she said.

“It’s an opportune time for catering to the newbies,” she said.

They will cater to locals first, then tourists, Smith said.

“Our job and our mission for all of our concepts across the country is not to get the tourist business, but to understand the locals and become a part of the community, and that’s been our focus in Boca,” he said.

The Smiths have hired Laura Huron and Brian Bagley, long-timers from the Dennis Max restaurants, to help them navigate and provide community links to the new restaurant.

“We want local faces and we want to establish a local clientele,” Eric Smith said.

Live entertainment nightly will be set for the patrons, he said. “It will be acoustic, background noise and not in-your-face rock ’n’ roll. It’s not going to be loud, jam-it-out style.” He said it’s been successful in all other venues they’ve used it.

Kerry McCabe, formerly of the Dubliner and Kapow restaurants in Mizner, heads up the cocktail program. Signature frozen drinks from the Maryland restaurant will be featured here, especially the “Crush” — a fresh squeezed citrus and vodka drink served over crushed ice, sometimes with a champagne topper. “It’s perfect for the warm weather,” Smith said.

The Smith brothers group began in Baltimore with older brother Alex buying a Häagen-Dazs franchise while still in college. At age 21, he bought a deli in Harbor East, and succeeded with $2 million profits in one year, laying the groundwork for a career as a restaurateur.

Eric joined his brother in Ouzo Bay, a new concept from the Smiths in Baltimore in 2014, then became a partner in the new family business: Atlas Restaurant Group. One opened in Mizner Park in 2017 in the former Jazziz space.

Next up will be a Loch Bar in Houston, set to open in January, but Smith hinted there may be one more concept coming to Mizner or somewhere else in Boca before year’s end.

Loch Bar will be at 346 Plaza Real and is expected to open in mid-November.

The iconic Banana Boat on the Intracoastal Waterway and Ocean Avenue in Boynton Beach is celebrating its 40th anniversary Nov. 8-11.

The Therien family owns the popular restaurant along with another eatery on the Intracoastal Waterway in Boynton Beach, Prime Catch.

“Many people in the Boynton area don’t realize that between Banana Boat and Prime Catch, we employ over 210 employees, of which about 150 are full-time,” says Luke Therien, who began working at the restaurant in 1996. His older brother, Pierre, and younger brother, Gilles, have been with the restaurant since it opened on Nov. 9, 1978.

Crazy Uncle Mike’s is now open in Boca Raton. The brewery/lounge/music hall with upscale eats is raising eyebrows with its prices, starting with $9 drafts and gourmet-priced sandwiches. House-made, all scratch, of course. Don’t look for burgers and tacos and such: Roasted cauliflower and broccoli are not your average bar fare. Acoustics aren’t, we hear, just right yet. Or maybe they’re going for that ear-splitting, concrete floor bounced sound. Judge for yourself — they will tweak as they go along. It’s at 6450 N. Federal Highway, Boca Raton; phone 931-2889.

A new taco spot created by two Wellington restaurateurs has opened off Powerline Road in Boca Raton: Don Chepo’s Taco Shop came into the mix mid-October after first opening in Wellington at the mall. Fashion Cuisine co-partners Dustin Parfitt and Juan Gando came up with the casual, fresh taqueria and with its western county success, came south. It’s at 6897 SW 18th St., Boca Raton, and is open till 2 a.m. on weekends.