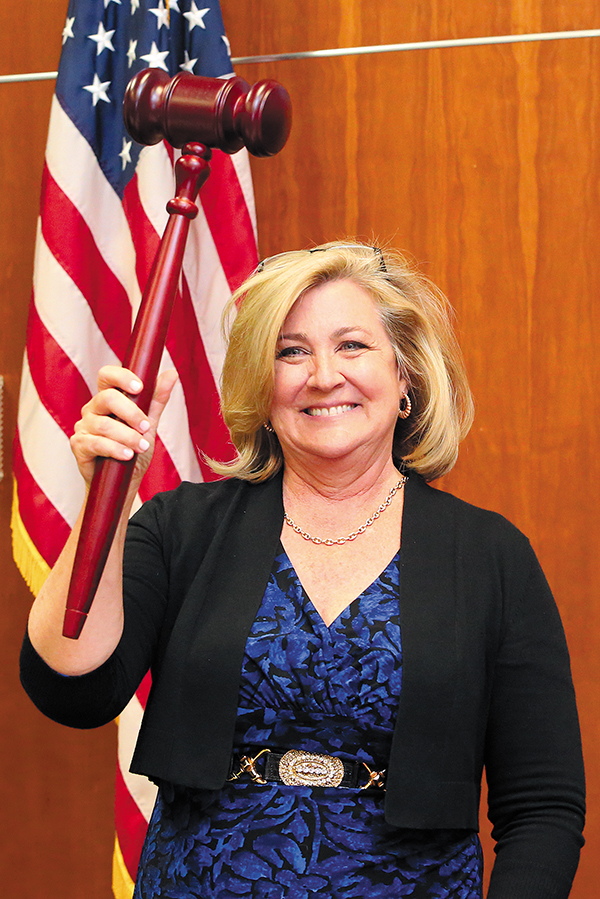 Delray Beach voters came out at the highest rate in more than 10 years in March when they elected Shelly Petrolia as mayor.
“I feel great,” she said the morning after the March 13 election. “All of the work paid off.”
The new commissioners and mayor were sworn in March 29.
Petrolia is the city’s third woman mayor, following the election of Rita Ellis in 2007 and the appointment of Catherine Strong in 1954. When Strong was chosen as mayor, she had the highest number of votes among the candidates. Back then, Delray Beach used that method to select its mayors, according to the Delray Beach Historical Society.
Petrolia, a Realtor, beat her opponent, Jim Chard, by having 809 more mail-in votes (2,184-1,375). She lost at the precincts by 392.
“We did a lot of door-knocking,” she said. “Not necessarily different from my competitor.”
Plus, her twin sons cast their first votes for her, she said. They turned 18 on Feb. 9. The registration cutoff date for municipal elections was Feb. 12.
Chris Davey, an election watcher and commercial real estate broker, knows the power of the mail-in ballots. He ran for City Commission in 2014 against incumbent Al Jacquet. Davey led at the polls by 429 votes and when the mail-in ballots were tallied, he lost by 265 votes.
When Ellis was elected in 2007, mail-in ballots (then called absentee ballots) were only 3 percent of the vote. By the 2018 Delray Beach election, mail-in ballots accounted for 42 percent of the vote, according to the county Supervisor of Elections Office website.
“It’s more convenient for people to vote that way,” Petrolia said.
Chard, a retired public administrator, believes he was the better candidate because of his background and experience. He was elected to the commission in March 2017 and threw his hat into the mayor’s race in the fall after Cary Glickstein said he would not run for re-election.
“I won on Election Day, but I lost on the mail-in ballots,” he said. “We tried hard to get those votes.”
After “licking my wounds,” Chard will become active again in the city’s nonprofits. “I could be more effective there than as an elected official,” he said. 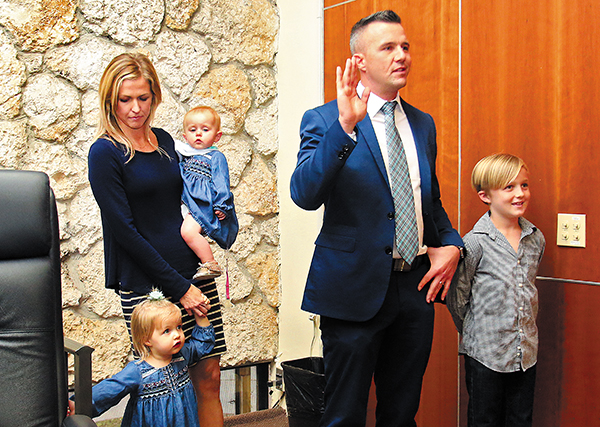 Ryan Boylston is sworn into office accompanied by his wife, Cassidee, and their children, Madelyn, 10 months, Elliott and Preston (right)

Mitch Katz, who held City Commission Seat 3, was upset by newcomer Ryan Boylston. Katz received 397 more mail-in ballots, but he lost on Election Day when nearly 1,400 more people voted for Boylston.
Katz, who works for a private education company, said he lost because Boylston’s campaign had targeted him in the last few weeks before Election Day. Katz didn’t have the money to buy new ads or mailers to counter.
“It’s a combination of things,” Boylston said. “I’m the stronger candidate with the civic and professional résumé and I have a reputation in town that I can work with all segments of the city.”
Boylston has served on the city’s Downtown Development Authority board, including one year as the chairman. He sat on the city’s Education Board for nine months and stepped down when he was sworn in as commissioner. City rules ban commissioners from also serving on city boards.
Boylston will remain on the board’s Education Master Plan Committee as a parent member, he said.
He owns his own marketing agency, Woo Creative, with an office in downtown Delray Beach.

Katz said he would spend the next few months concentrating on his family and work, and then decide what public service role to play. He also volunteers as an assistant scoutmaster to his son’s troop.
Adam Frankel, a criminal defense lawyer, returns for his second stint as a city commissioner. He won both the mail-in and in-person votes in Seat 1. He could not be reached for comment.
At the candidate forums, Frankel said he wants to establish a $1,000 fee on transient homes that rent more than three times in one year. The fee is aimed at sober homes, but it also could target homeowners who offer their houses as vacation rentals. The money collected would be used to cover code enforcement costs. Frankel also wants to hire a full-time city attorney, decrease staff turnover and improve development between the interstate and Swinton Avenue. 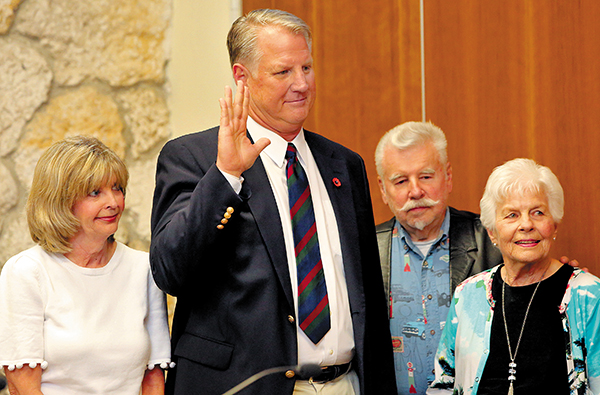 With Bill Bathurst as he is sworn in are his wife, Debra (left), stepfather, Jim Marshall, and mother, Barbara.

Bill Bathurst, a Realtor, did not have any challengers to finish the remaining two years on Chard’s seat. Bathurst raised about $5,000, which he gave away in March to Delray Beach nonprofits. Because his family moved to Delray Beach in the 1930s, Bathurst will focus on historic preservation, but in the modern way so that historic buildings can be renovated for small businesses. He calls that ambition Village by the Sea 2.0. Bathurst describes the word “village” as an attitude of caring. He also wants to create a people-first mentality that translates into working together to get things done.
Petrolia’s priorities will be controlling developments that add to traffic and congestion; preserving historic buildings; creating a parking management plan for the downtown; building roads, sewers and sidewalks that are sustainable; and continuing to monitor sober homes so that safety can be maintained.
Boylston wants to focus on education and small businesses that provide jobs in The Set and Haitian communities. He also wants to provide stability to repair the city’s reputation to get things done.
“It will be a team approach to all of the rest that the commission wants to do,” he said. “Petrolia will be our head coach because she has five years’ experience as a commissioner. That’s the most important thing needed in a mayor.”